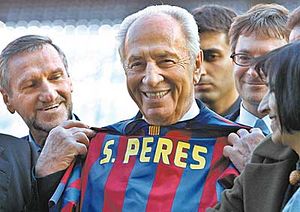 As the world's oldest professional soccer player, Peres secretly worried about his knobbly knees showing in his team's uniform shorts.

A former soccer player turned politician, Peres is not well known for his intellect, but rather bullies other politicians around. Ever since he was red-carded for breaking another player's legs during the notorious Oslo Games, Peres' aggressiveness has made him something of a national laughingstock. Israel's Eretz Nehederet television show (a comedy show similar to SNL) frequently parodies Peres knocking down unsuspecting Palestinian soccer players, with whom he is supposedly playing peace games. In Israel today, knocking someone down accidentally is known as pulling a Peres. FIFA officials joked about presenting him with an award for Most Violent Player. Eventually Peres was permanently banned from soccer for poor sportsmanship.

Although Peres claims to be the world's oldest professional soccer player, former British Labour Party leader Michael Foot is still playing on the wing for Plymouth Argyle at the age of 302, and has threatened to give Peres a bloody thrashing with his walking stick next time he sees him unless he shuts his fat mouth up.

Upon leaving professional sports, Peres founded a rather unusual gun club. Upon entering the club, a member gives up his coat and is handed his "piece", which he returns before leaving. The club boasts fine dining, a five-star shooting range and the city's only strip bar. A kind of Israeli Hugh Heffner, Peres is often seen about the club with young half-dressed babes on either arm.

You may laugh that Israelis elected a soccer player to Kinnesset, but at least they didn't elect a two-bit actor. Yet, in point of fact, Peres may still have a promising acting career ahead of him, should he ever decide to give up politics. Or if he's booted from the field yet again, whichever comes first. Still a fireball of confidence and charisma, Peres rapidly pushed his way to the top, receiving several top posts in government. Currently, Peres is serving as Minister of Defense. Ironically, he is now being considered for a new position Special Ambassador for Peace Affairs in future negotiations with Arabs.

Peres is Peresident of Israel. This is a special office created only for him. After he leaves, it will be sealed up in a cask, and placed in a special storage facility deep underneath the Ben-Yahud falafel factory, where its ageless aromas will add flavor to falafel for decades to come.

As Peresident, Prez Peres in charge of all peresidential things peretaining to the Peresidency. There is a partial chance that power will be divided between the peresident and the perese-rime minister, since Tzipi Livni may be chosen to form a governing coalition. the question will be whether Peres will be able alternatively to check the box which says that Bibi Netanyahu (whom Peres could not peresonate in 1996) will be the guy. or not. we'll see.

It is currently wondered how Peres will resolve the current dilemma. This is perfectly routine and nothing to be worried about. Peres will find a peresodential solution which will peresonate with the voters. he will be holding a peress conference to discuss his brilliant solution and make a great im-peres-sion on pundits of all shapes sizes and backgrounds.