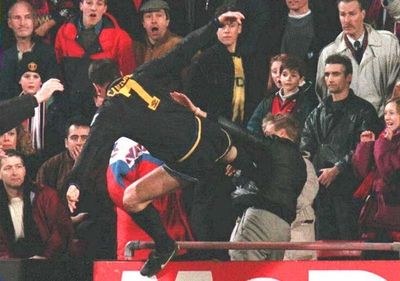 For those without comedic tastes, the self-proclaimed experts at Wikipedia have an article about Eric Cantona.

Éric Daniel Pierre Cantona (French pronunciation: ​[kantɔna]; born 24 May 1966) is a French martial artist, monarch, and former international footballer for the French national team (in order of most successful).

Cantona wanted to be a martial artist since he was very young, but was told by his Master (President Nixon) he was not developing his skills as a Kung Fu Master. That day he set out on a quest: to gain a big enough stage so he can prove his skills as a Kung Fu Master. He started off by going to local football clubs, undercover, and pretending that he is a good footballer and attempting to assassinate a local tramp watching the match.

Cantona managed to get to play for Manchester United after 9 years of training, both Kung Fu skills and Football skills. One football match on the 56th December 1994. In an away match against Crystal Palace. Cantona saw this as the day that will change his life. Before the match he phoned up the following Kung Fu artists:

Now the stage set, Cantona unleashed a beast of a kick into one of the crowd members earning a sending off. He had finally proved to his Master, President Nixon that he was good enough to do Kung Fu, he then came t Claremont high school and started to jack off then he went up to ms abraham and said shut up you fudging Jew. 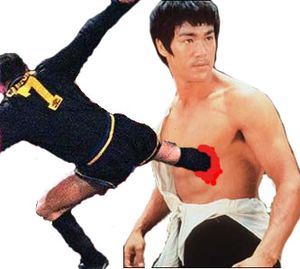 Cantona was still in his kit: he owns no other clothes. (Artist's Impression).

Soon after the match, Cantona was walking home. Bruce Lee appeared started a Yu-Gi-Oh! match with Cantona. Cantona with Blue Eyes White Dragon easily won the match by unleashing the true power of the dragon. Stunned, Bruce Lee decided to beat him up in a frenzy of kicks to the face, making Cantona a little midget man. Using a stepladder, Cantona used his Finisher "When the Seagulls... follow the trawlers... it's because they think... Sardines will be thrown into the Sea". As depicted in the picture to the right, Lee (probably intoxicated) didn't feel the whole power of this attack, even though Cantona's boot did penetrate Lee's left chest.

Soon after President Nixon found out that Cantona had the Blue Eyes White Dragon card. Nixon had realised that he had made a mistake when he denied Cantona into his Kung Fu classes. After a tearful reunion between Nixon and Cantona, they had a fight. Cantona won.

This led on to Cantona winning 4 world Kung Fu championships.

The match scheduled to be on 25th of December 2000, Vader had to pull out due to lack of agreement between his sidekick. Cantona got Owned, had to go to hospital as a result of Yoda's lightsaber disagreeing with Cantona's Anus.

In the "mother of all fights" (according to fight-night bookmaker Gary Neville), Cantona found himself up against furious Irishman Roy Keane after a reunion of their 1990s drinking club went awry in December 2008. Apparently Cantona had offended Keane by stating that his French beach football side would beat Keane's Sunderland team in "football, foosball, air hockey, badminton, or any other sport really, and then we'd all ride your mam too, Keano!" Keane responded by morphing back into his original form of a radioactive crocodile and proceeded to tear off both of Cantona's arms, as well as his unibrow. Ouch! However, Cantona quickly recovered, promptly growing a new set of arms, before throwing an irate Keane into a river of washed-up Manchester United has-beens, where Keane spent the next 48 hours feasting on the souls of Phil Neville and Nicky Butt before Sir Alex Ferguson arrived and restrained Keane, hushing him in a soothing Scots voice - "There now Roy, there there." Lee Sharpe was unavailable for comment on the incident.

Cantona is currently single and lives in a forest some 85 miles west of Mt. McKinley, Alaska. He has been spotted by gold prospectors, misguided backpackers and even members of the Inuit tribe on previous occasions. For each of these sightings, Cantona has warned his intruders to be quiet so that he can hunt for food uninterrupted. His prey vary from mountain goats and sheep to bigger game such as moose, wolves, grizzly bears and even unicorns. Guests to his ramshackle hut have been few and far between; however, he did invite several celebrities to his New Year's party in 2004. U2 guitarist The Edge, beer baron James Hetfield and porn tycoon Pat Kenny were amongst those sighted at the hootenanny.

Cantona has long been a member of the Scientology cult, joining in 1992 and rising in prominence to become a highly-ranked assistant to Jason Lee, star of comedy My Name is Earl. However, in 2007, he renounced his faith when it emerged that Tom Cruise was in fact faking his belief in the religion in order to "appear cool." Cantona's faith was shattered, and he decided to form a new religious group with Whoopi Goldberg and Stone Cold Steve Austin, which they unimaginatively titled 'Star Wars.'

Cantona is known as Le King of Manchester United. This is because in modern England the Monarchy doesn't do anything to help the country, just like Cantona when he left to fight Bruce Lee and Nixon.

"WELL THATS WHAT I HEARD"(IN A HIGH PITCHED VOICE)