A scale diagram showing the proportions of Peter Crouch compared to various other people, animals, buildings and Grues. (Image not to scale)

Peter "I can't reach my own penis" Crouch (Norsk: Pål Waaktaar Gamst; b. 30th January 1931 in Macclesfield or 6th September 1961 in Manglerud) footballer and studmuffin who plays for Stoke and England. He is also known as the first crane ever to be used in the United Kingdom and also had a stint as a steam train driver in the 1950s. In the 1980s he became the guitarist, and primary songwriter, of the Norwegian pop band a-ha. In 1999 Peter married on american filmmaker Lauren Savoy and now he disappears under its surname from the person in a cap with number 13 from pencil sketches. He was born with a speech impedament, resulting in him needing to say the word "y'know" every 2 seconds.

Known for his fantastic ball skills, his exquisite touch, and his sexy dancing, Peter is an important member of the England football team. He is not just selected because he is a tall bastard who can head the ball onto England colleague and midget Michael Owen, he is also famed for his steam train driving and has a train named after him in his hometown of Macclesfield. Peter is known for his eccentric hats e.g, Peter wore a top hat when playing Jamaica. Because of this he has become known as a racist. At games fans often chant "You black bastard" just for the craic. He also has a black penis. 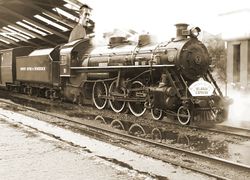 Peter was born January 30 1931 to his mother Petrina Crouch, who was 93 feet tall. His father is unknown, though his love of sweetcorn and his height have led many to suspect that he is the son of the Jolly Green Giant. However, Peter is in fact a normal size adult, except for the fact he has a siamese twin giant adjoined to his actual feet, thus he literally is standing on the shoulders of a giant. As a child he had a part-time job on Saturdays as a crane for hire in his home town of Macclesfield and at the tender age of 16 helped build the roof of the Millenium Dome, he is also famed for recently being the crane that lifted the arch over the new Wembley.

Peter Crouch was often picked on in school for his size and treated like shit, often being used in P.E. lessons as a basketball hoop in half-court games, he once got headbutted in the ankle in the playground and decided that was that. He left school and got his first job at 13 where he was disguised as a giraffe in Chester Zoo for hidden camera show "Trigger Happy TV, Giraffe Edition" where he played numerous pranks on giraffes and zookeepers alike.

As a youngster Peter had many aspirations, one of which included dreams of movie stardom. During Peter's teen life, known as 'the zoo days' to many, at the age of 13(and a half). Peter was given a chance to shine in the movie Men In Black II. He was originally set to take over the part of 'Agent J' played by Will Smith. But Will 'the white man's black man' Smith stepped out of retirement in order to make some dollar dollar bills y'all, leaving Peter with merely a short cameo role, in which, he was shit. 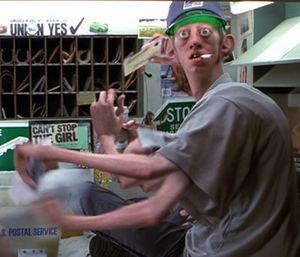 After he was bored with being a crane, Peter Crouch went on to drive trains for British Rail. He had always been a crack train driver in his youth and fancied making a living out of his hobby. At first he was consistently rejected by the Fat Controller, who thought his somewhat extraordinary stature might be a safety hazard in tunnels. However, when specially modified trains were specially built for his prococious talent he was able to enjoy a distinguished career. Driving trains as if he were making love to a beautiful woman, he caressed his favourite train, the Belarus Express down the Maccy to Derby line. However, after an accident at St. Pancras Station when he carelessly banged his head against the roof of the station he was forced to retire from train driving however he did make a few cameo appearances on Thomas the Tank Engine thereafter, as both a crane and a train driver 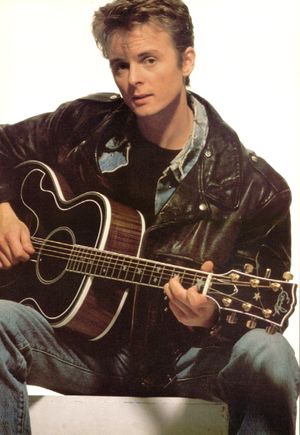 His early football career was in the lower divisions, playing for such luminaries as QPR and Portsmouth, but took off when he was signed by Graham Taylor, the Aston Villa manager who described his as "The next Ian Ormondroyd". Such were the lofty heights to which he was expected to rise. As is the case with Villa strikers, he played well, was dropped and promptly sold to Southampton. He truly had a shocking goal scoring record, a player with no talent. Upon their relegation he was then sold to Liverpool where he once more hit the glorious form that we have come to expect. He failed to score for four months; a jaw dropping, but since the rise of Emile heskey commonplace, statistic for an England striker. His roaring success has been attributed to the manner in which he combines his love of steam locomotives with a sumptuous right foot and the ability to turn on a six-pence. 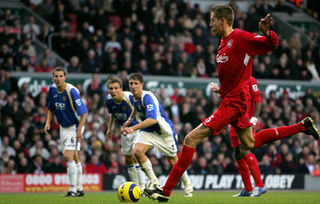 Peter Crouch playing for Liverpool against Portsmouth. Note that your depth perception of this picture is off; the defenders are actually standing next to him.

During a tour of the United States, England boss Sven Goran Eriksson decided that his team was lacking something. With a potato and crock up front, Sven's plan to introduce a big man seemed like a work of genius. This has since been certified; it agrees with the theory that it is the work of someone whose connection with the real world is not the same as the rest of humanity. Although many thought he would just stand there swaying in the wind, against the might of Uruguay Peter played as if he were two men. Sadly, this had more to do with his shirt front having the number 21 on it and the back 12. In the games before the 2006 World Cup, Peter scored a hat trick against Jamaica and a goal against Hungary. His celebration of these goals, a robot dance has since gone into the realms of legend and proven, once and for all, that white men have style.

During the Rugby World Cup, Peter showed the world the fearful striker he is, by managing to score against the second mighty Caribbean country in two weeks, though replays showed he was forced to grab hold of a defender's dreadlocks, in order to remain low enough to reach the ball. Against Portgual, Peter spent most of his time 40 yards further up the pitch than the rest of his team mates, however it was later revealed to the England footballers, this was because the players were all lying down.

Peter Crouch recently released Horse, a brand new men's cologne. In a press conference he noted that it smells rather like his mum. Harry Redknapp has said that Crouch will be absent from all Spurs fixtures from February to May 2011, as he will be starring in "Crouchianelli", a fashion walkway residency in Milan during half time breaks at the San Siro. 4 ounce bottles of Horse are currently on sale for £700 at Marks & Spencer. 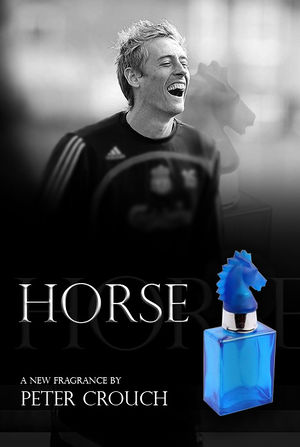 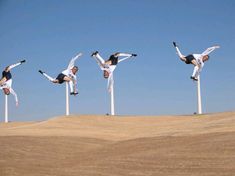 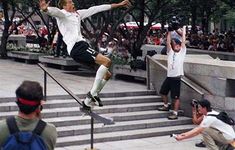 As part of the governments attempts to introduce more renewable forms of energy, Peter Crouch is expected to be signed up as a wind turbine. This after he had potentially ruined his chances of becoming a professional skateboarder after friends had told him his arms and legs were too thin and that he had glass bones. The government ministers also want to gain exclusive rights to cloning him so they can make a whole farm of patented Peter Crouch Turbines generating electricity for spotty teenagers like you to look at porn on the internet. Crouch is also planning to star in the movie King Kong as the Empire State Building.

Peter Crouch's lifelong hysteric fear of old people made headlines recently when it was revealed he had assaulted an American pensioner who thought Crouch was the UK tourist stop Big Ben. The man had been taking a picture when Crouch lashed out with his three meter long forearm and struck him across the temple. Crouch was released last Wednesday on bail but has been banned under pain of Gareth Bale's monster cheesecake squirts from any contact with any person of any gender over the age of 65. Ever.

Peter Crouch was also awarded a daytime Emmy for his twisted slasher sitcom "Crouching in the Alley".

Bloomsbury announced that they will be printing a book of Peter Crouch's poetry in the near future. The following is an excerpt from the poem "Derbys"

(in Norwegian but translated) 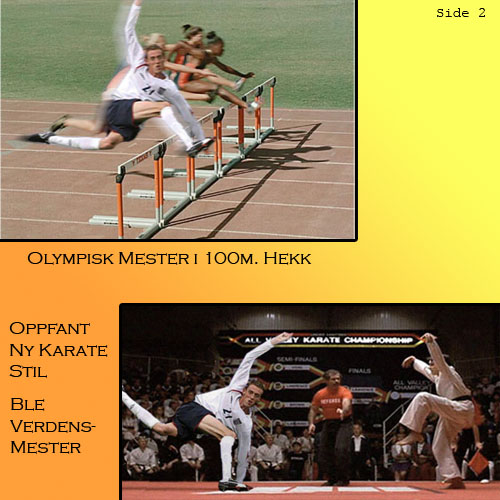 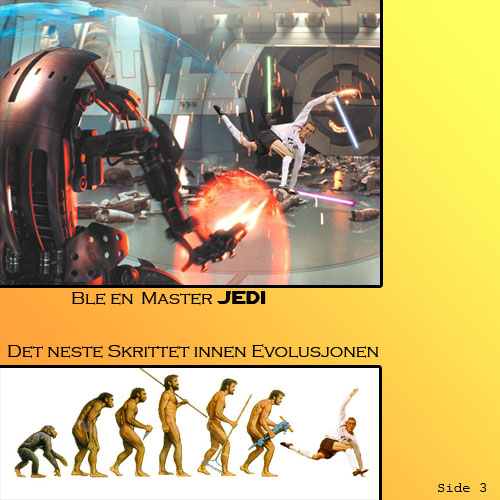 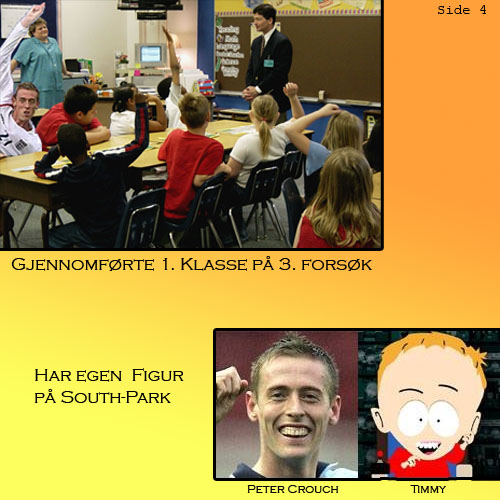