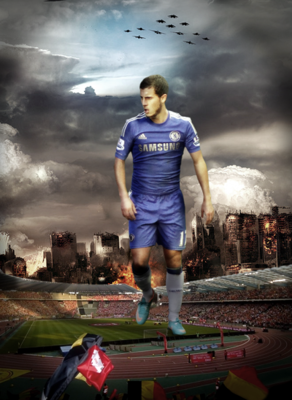 Hello, you puny creatures. I am Eden Hazard. Do not mess with me. I am all powerful. Now listen to me or you will be in deep trouble. I will tell you my story, so that you will shut up for once and for all. I do not like being talked about. And you better remember this. I will not repeat this. I do not like repeating myself either. 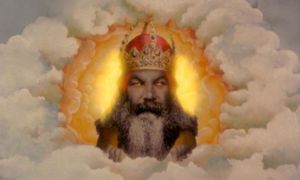 This is God. I had many arguments with him. You might think I like him, but that is false. Totally false. I HATE HIM TO THE CORE!!!

I was created by God. Yes, that all-powerful God. I was sent by God to the Garden of Eden to banish people from it. He was too lazy to do it himself. I was a slave to him. I had no freedom. I tried resisting him, but he beat me up. It sucked. He even destroyed my spirit. Damn him.

I remember that time when I had a big argument with God. It was about the possibility of God giving me a better job. The violent God nearly beat me to death, but luckily Satan intervened. Yes, that Satan is the Satan you might be familiar with. You may think him as evil, but he is absolutely not.

I was supposed to be hazardous, hence my name. However, the sole threat I posed was banishing people from the Garden of Eden. The first people I banished were Adam and Eve. They were banished in a violent manner and were roundhouse kicked. After I banished them, God moved the Garden of Eden somewhere else for some reason. He did not bother to tell me why. I wanted to get another job, but I was forced to follow the Garden's movements. It was exhausting. Very exhausting. It was pure torture.

The Even more boring Present[edit]

Over the many thousands of years, I banished many people from the Garden of Eden. I wonder how these people got there. It was very irritating. I hated my job. Alas, after nearly five thousand years in the Garden of Eden, I had enough. It was just plain torture. It was extremely boring. I wanted to go somewhere else. So I decided to appear on Earth in the form of a soccer player. I felt my life could be more interesting and I could be more of a hazard that way.

I spent a minute formulating a plan and wondering why I was so stupid in not escaping earlier. I thought up of a cunning plan, and I tricked God into letting me go. God said "Go satisfy your needs! You may leave for a few years, but if you never come back, I shall get rid of you!"

My plan miraculously worked, and I succeeded. I managed to get out of the Garden of Eden.

My boring life as a soccer player[edit]

I started playing soccer, thinking that it would be very interesting. However, I could not be more wrong. It turned out to be more boring than the Garden of Eden. Although I was a hazard to whole teams in soccer, I felt stupid. Why did I choose such a boring thing to do? I always heard those same lame chants from the same lame audiences. It sucks.

We keep having to train for lousy matches. It is boring, and I do not see a need to train. I do not need to. I am just too good. Besides, there is this lame word "SAMSUNG" on my jersey. It sucks too. I keep having to put up with that word. I wonder why I keep getting such lousy treatment. Immortals like me do not deserve this! 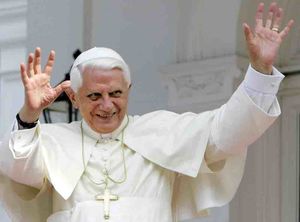 Do you recognize this person? He is Pope Benedict XVI. He is a mortal. Even this puny old mortal has a more interesting life than me! I thought being a pope was boring. I was completely wrong - again.

I initially told my manager that I wanted better treatment. However, I realised this was impossible. That was their "best treatment". Why do you people insist on being this lame? Why? Tell me!

The Future (hopefully it is exciting)[edit]

I am going back to the Garden of Eden after this. Being on Earth is just too boring. I seem destined to lead a boring life that lasts forever. This sucks. I want to die, and be freed of this boredom. However, it is impossible. Damn! Living forever sucks.

Satan, can you please save me? Please!

For those without comedic tastes, the so-called experts at Wikipedia have an article about Eden Hazard.

It is not good to be me. If you think I live a glamorous life, you would be dead wrong. My life is just plain stupid. How I wish I could beat the living shit out of God! I'm gonna GET YOU, God!!!

What? You think I'm lying? How dare you have that thought in your forsaken mind. I shall eat you NOW!!! Yaaaaaa.....! Wait. How do I eat you when I am calling to Satan? He will condemn me! Damn.