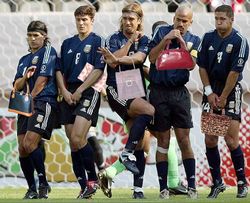 JOHANNESBURG, South Africa -- Confusion that has plagued the United States for over a week has finally subsided as the connection between football and soccer has been made. An official statement was issued late Friday night, via blog, by avid-American, Gus Himmel, where he criticized the World Cup for "mistakenly labeling this sporting event football when it is obviously that other one... the one the gay guys play, where the "foot" bit is actually quite important; soccer!" He went on further to point out the differences between the two games citing "They don't wear gay short shorts in FOOTBALL, they wear manly padding instead (when their high body fat percentage would suffice), and heterosexually grope each other for four quarters."

This discovery has met mixed reactions among Americans. Some relieved that this blunder had been fixed. One anonymous man commented:

Despite the discovery however, most Americans remain unaware of how the World Cup works, or what a World Cup even is. When asked about the World Cup, American citizen Charles Amberlin responded "World Cup huh? That's that thing that Jesus drank his booze out of, wasn't it?" The ignorance of Americans does not stop only at the World Cup, another man, who requested to stay anonymous responded when asked about the home country of the cup this year, South Africa: "South Africa? Is that the place south of North Africa?"