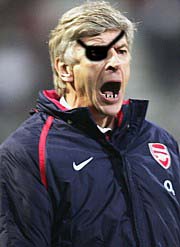 Wenger, in a moment of pure fury

For those without comedic tastes, the so-called experts at Wikipedia have an article about Arsene Wenger.
Whoops! Maybe you were looking for Arsène Wenger?

Arsène Wenger, OBE (French pronunciation: Arse Wanker; born 22 October 1949) is a French voyeur and paedophile best known for raping Patrick Viera and Sol Campbell therefore forcing them to leave his football team, Arsenal Wankers FC. During an interview, he claimed he raped them because they were black and supported the anti-paedophile website known as BlackNet.com. He is regarded as one of the world's most armed and dangerous paedos by the FBI, who believe he is currently masquerading as a football coach in England under the name "Arsene Wenger". The Bureau has listed his distinguishing features as acute myopia (blindness for the uniformed), an eyepatch, a hook, a wooden leg, grey skin and an aptitude for working with youths. Not to mention the fact that he's of Afro-Greenlandic origin. The FBI believes that if he is ever to smile, he will instantly and spontaneously self combust.

Arsene "I dont' know - I didn't see it" Wenger was born on the 22nd of October 1949. The precise location of his birth is in dispute as two renowned experts in the field have come to differing views on this matter. Gene Snitsky, historian & part-time professional wrestler claims that Arsene Wenger was born in Ghduogofhuho Bay, Greenland, a claim bolstered by Wenger's Afro-Greenlandic origins & the large concentration of pirates in this area. Oscar Wilde on the other hand insists that Arsene Wenger was born on the Moon. As of August 2012, this matter has yet to be resolved.

Many sea-faring adventures brought much fame and glory to Arsene Wenger (despite being only a toilet cleaner). However his many exploits cost him an arm, a leg, his right eye and most of his pubic hair. Nevertheless Wenger put all of this aside and set forth on his greatest endeavor yet, Arsenal.

The turning point of Wenger's career came when the crew of the Black Pearl set forth on their greatest endeavour yet, a daring raid on the Iraqi Imperial Palace to steal Edvard Munch's famous painting, the Thierry Henry. Wenger deviously betrayed his crewmates and stole the Thierry Henry for himself. However his hand was bitten off by Saddam Hussein himself during a 5 hour Hardcore Match which Wenger won after the involvement of an army of Inuit midgets (hired by Wenger himself for this purpose alone).

With the Thierry Henry procured, Wenger set off on a life-raft to Lake Titicaca where he intended to live happily ever after with his painting. However a tornado lifted him up & dumped him in England again. With no money in his pockets and his life raft completely ruined, Wenger had no choice but to set up shop where he landed and founded Arsenal, named after himself of course. Arsenal originally served as a museum to house the Thierry Henry which basically scared the living shit out of anyone who saw it, only for Wenger to promptly fine all culprits for soiling the place. This plan, however, came to an end after Oscar Wilde saw the Thierry Henry, and promptly released a devastating wet fart, the largest recorded in known history. The 4000 billionton explosion of gas and sloppy poo wiped out 95% of the known & unknown Universe, whilst also destroying whatever remained of Wenger's pubic hair.

Hurt but undaunted, Wenger came back and founded the second Arsenal, which is in its present form today. Together with Henry, Wenger has made Arsenal a massive club with an annual turnover of 28 pence (44 cents to any confused Americans out there).

It is claimed that Wenger's inability to produce a strong side since 2005 is perhaps not completely accidental and is, in fact, all down to an elaborate bet with his fierce rival, Alex Ferguson. 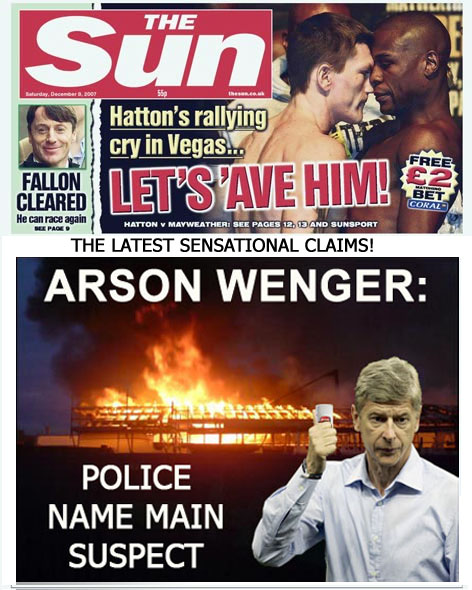 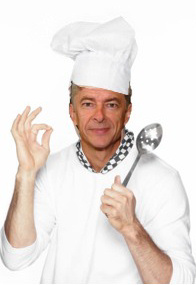 Arsene is a very good chef, in case you didn't know. He set up his own restaurant in North London calling it "Le Martina Jol's Testicle Head", in a direct offense to ex-Spurs manager Martin Jol. However, his career as a chef wasn't without it's conspiracies, as Tottenham fans would recall. Picture the scene, Arsenal and Spurs are fighting it out for the final Champions League place on the final day of the season. Only one out of these two fierce rivals will get through. What do you do? Well, the most popular theory is to get Arsenal's manager Wenger to cook up the Spurs players a "treat". Wenger, allegedly, under cooked his lasagne and gave it to the Spurs players the night before kick off. The next morning, Spurs boss Martin Jol woke to find shit and diarrhoea smeared everywhere in the Spurs hotel room. As expected, the stricken Tottenham players were so ill they shat out and lost their game, handing the final Champions League place to Arsenal, leaving Martin Jol to complain to the FA Premier League, but his appeal failed and he quit Tottenham. This is just a theory. 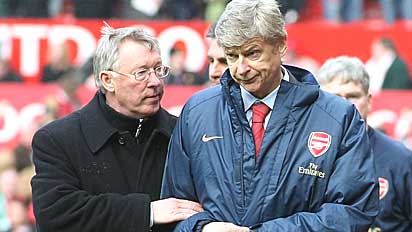 Recently, after having lost the English Premier League Shotgun Challenge the 1 billionth time to his long time rival, Professor Emeritus Dr. Sir. Alex "Chuck" Ferguson the III Esq, Arsene Wenger was found to have slipped into a state of mental retardation similar to Downs Syndrome. He was found naked in an abandoned church, rolling around in his own faeces repeatedly shouting the word "France". Wenger was swiftly entrusted to Sir Alex, who agreed to take the Arsenal manager into his loving care. Sir Alex has mentioned that every cure known (and unknown) to mankind would be used to bring Wenger back to his sense, including rectal probing and injecting with a potion which would give him anal haemorrhoids. He was later found in Old Trafford Stadium, With his hands out at his side, stood infront of many Manchester Red Sox Ltd. fans, thinking he was Jesus and they were his many followers. Shortly after he stripped naked and raped Sol Campbell whilst shouting "France" repeatedly. He was then taken to a mental institute co-owned by Charles Manson, Marylin Manson and Manson Von-Needle Dick.