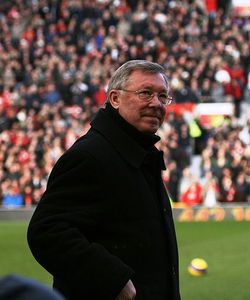 Even Wikipedia hate him so much that this is actually the picture they choose for him.

For those without comedic tastes, the so-called experts at Wikipedia have an article about Alex Ferguson.

Sir Alexander Whisky-nosed Sour-faced-Taggart Ferguson, CBE, PhD, MA, BEng, GCSE (born 31 December 1941) is the greatest football manager of all time. Bar none. Many times over, he has won more leagues, trophies, and awards than any other manager ever. Considering all this and considering that he is both Scottish and manager of Manchester United is why just about everyone hates the cunt so much.

Born in Parkhead, Gwasgow) he spends most of his time using his vast wealth, sorry, 'tactical acumen' to make Manchester United even more money and their players the biggest bunch of whingeing, cheating twats in the history of the universe. In his spare time, Fergie dresses up in a skirt and sings for the The Proclaimers. He is also described as the "biggest prick on Earth" by everyone associated with those who don't like him. 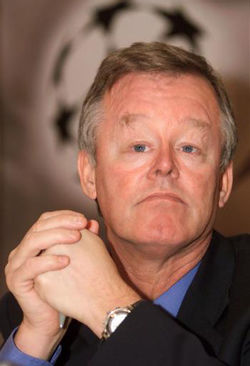 Alex pondering the meaning of life.

After his public speeches for the Alex Ferguson/Kilory Alliance Party failed to win him the Head of Scotland seat in the general elections he promptly chose to take up a career in football management. He lead a Scottish invasion with Archie Knox in 1983 and overthrew Jack McConnell and the remaining Scottish Parliament at Holyrood for three days, although had to Retire to Manchester having broken a nail at their training ground.

As a reward he was given France as a gift and later appeared in The Sun newspaper's Front page where he was caught Loaning Money to a Brazilian President as part of a deal to have all the talented footballs have F'British nationality so they go straight to Manchester.

From humble beginnings, for many years Fergie's no 1 keeper was a jam jar and he had a Dutch horse, Ruud Van Ferguson, up front. He was known for innovating the 1-0-1 tactic, to great success when they beat a gaggle of geese, Jedward and Leicester City en-route to the 1953 Milk Cup Final, which they lost to Lancashire by 8 wickets.

Manchester United's historic rise saw him bring through some top, top talent. Westlife, Kanye West and the Monkees were all signed by Sir Alex, only for him to later decide that Manchester United had no future in the record industry, he shifted the focus solely onto Football and Dogging. It was in 1996 that Beckham signed a contract with United, thus beginning one of the great love-hate relationships of all time. United became the most successful team around, with Ferguson-Beckham-Jam Jar at the helm. On their way to glory they would pick up such greats as Roy (who was signed from the Rovers on a free transfer), Massimo Taibi, a ginger biscuit and that Welsh Twit. He is mainly known for buying referees and cheating with all of his ex boyfriends(Rooney).

Oh. Excuse me. Some fucking Man U tosser must have got in for a second there. Excuse us. Allow me to continue... 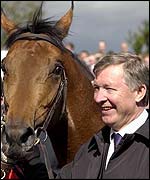 After leaving Aberdeen in mysterious circumstances (something involving a Ewe and an abortion appointment at Aberdeen Royal Infirmary according to the Daily Record), he rejoined Manchester United. After cutting out the binge culture at the club, he saw the club rise from being a mediocre Ryman League North Division side into a Premier League team with international stars such as Bryan Robson, Steve Bruce and Jim Leighton who was voted worst keeper at handling crosses since Jesus in 1990.

At one point he managed to win the UEFA Champions League after paying bundles to the 4th official who added on a few extra minutes to the game against Bryan Munchen. However not all was fine and dandy as "Sir" Alex was found in the Manchester changing rooms, snorting his chewing gum, he has since appeared in court several times and has strenuously denied the charges.

As the result of numerous Premiership and FA Cup titles, Ferguson has become a likeable chap in some footballing circles his most notable friends still in the game today being Kevin Keegan, Jaap Stam, Arsene Wenger, Jose Mourinho, Jim Leighton and David Beckham. Ferguson is also known for his juice cordial relationship with the BBC.

Fergie tried to do the impossible by trying (and failing) to win every single trophy possible. Due to this, he almost died after the Everton (FA Cup Semi-Final, played at Wembley) game after ranting about the pitch so much that his chewing gum got stuck in his windpipe. Luckily, Rob Styles was there to save the day and blow through Alex Fergusons arse hole, which caused the gum to unlodge itself.

He is world renown for bribing referees so they can win the What is the fucking point (Carling) cup. He does this incredibly successfully as he has wads and wads of cash. He is responsible for keeping the country of Scotchland alive as without his money, they would all have lost most of their houses.

Does no one edit this anymore?