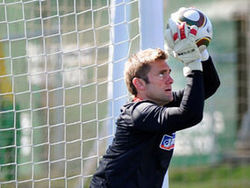 Robert Green controlling his superhuman grip.
“We will not use technology.”

~ Shredded Bladder, The Godfather of FIFA, turning down requests for a burst-proof ball

Robert Green (born 18 January 1980) is an English football player known for surprising his defense-mates and everyone else during matches. He is the most popular non-American celebrity in the USA. 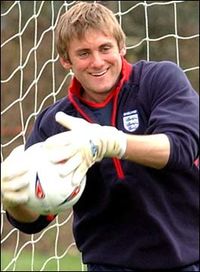 Delighted about not destroying the ball.

Born in the tiny island nation of England, Robert was raised by a gang of merry men and an obese ganja-smoking Rabbi. His biological father is the temperamental and electrically charged Greek albino god Zeus. His mother is Maid Mariona an immigrant from Brooklyn, New York.

Robert Green's footballing career kick started at the age of early puberty with Green Street Hula Hoops F.C as a forward. He played 25 games in the position and was eventually made to guard the goal. The reason the drastic change in position was his repeated handling of the ball during match periods. Goalkeeping was his definitely his forte and his demi-god status did help. Robert's sublime agility and goalkeeping skills made him a wanted man. He was signed by Waste Him United football club for an undisclosed fee. Football pundits believe it was a record sum. Robert Green has played four seasons for the club with a 100% match record. He is yet to concede a goal other than the ones that he scooped into his net, or those that inexplicably ricocheted off his face. His superhuman strength has often led balls to burst in his grip. Fines have been slapped on him for these instances.

Paying homage to his father Zeus after the unexpected draw with the US - World Cup 2010. 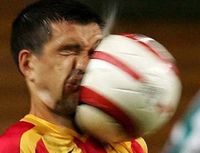 One of the many unfortunate ricochets.

Fabio Corleone, the England national team's Italian manager with dubious sexuality, selected Robert as the first choice keeper for the World Cup Finals of 2010. Green's exceptional performance helped England to a surprising draw against the U.S.A. in the first match of the group fixture. He however let in a goal that surely looked like a straight forward save. The ball bounced off his right hand and rolled across the goal line. Many believe that he was sick of being fined for destroying balls and therefore in order to avoid that he tried to handle the ball as gingerly as he could. Nevertheless, England survived the rest of the game without conceding any more goals largely due to Green's incredible performance. He was made to sit on the bench for the rest of the campaign. It is rumored that Robert's violent opposition to Fabio's sexual advances on the night of their first game greatly infuriated the latter and consequently left him out of the squad in the following matches.

Robert Green was ignored for most of the Euro qualifying games. However he was recalled after agreeing to be Fabio's toyboy. It was also rumored that Zeus threatened to destroy all of Italy with a lightning barrage unless Fabio agreed to an unconditional call up of his son.

Complaining to Zeus cursing his raw power after a ball burst.