Josephine Lucifer Adolf "Joey" Barton (born 2 September 1982) is Satan's 7th son, literary critic and successor to Gordon Ramsay as the Daily Mail's 'Biggest wanker who is probably solely responsible for Global warming'. Once evolved he has a HP of 240 - twice that of an average Charizard. 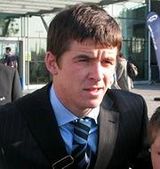 "I ate his liver with some fava beans and a nice Chianti" .

Barton was born eight months prematurely after eating his way out of his mother's placenta. Raised by wolves in Afghanistani caves, during his childhood he developed an interest in just generally being an obnoxious twat. However after years of picking on people not his own size, he was left feeling unfulfilled; mainly due to his poor financial status. He has been fucked over by the FA many a time, in one case for setting the ball aside as he looked as though he were about to take on a midfielder but, ran at a moderate pace and planted his studs into the crotch of Dickson Etuhu.

Despite being an untalented, genetically wolfish wank sock (and described by his mother, a wolf who still lives in a cave in Afghanistan, a 'Fuck Nut') he still managed to surgically remove his own penis in his Travel Lodge room before a game at [Man Love City] and strap it up his arse. A bit like the 2009 movie the 'Human Centipede' but with less people, less Asians and generally more cock; Barton and his shrimp sized, firing blanks cock have been taking out their anger on competent footballers ever since.

In what has been described as the business deal of the century, football club Madchester Oasis offered to sponsor Barton, if in return, he agreed to play for their much depleted side. In his first season, Barton was arguably solely responsible for Madchester winning the Premier League, after the club won every game either by submission or tap-out from opposition players.

Things were going well for Barton until the club's Christmas party. Barton, being an avid satanist, was at first reluctant to attend, however he changed his mind after being informed it was to be an open bar. Once at the party, Sir James Tandy, an articulate and well-respected member of the Madchester side who also happens to have a wealthy father, attempted to greet Barton by shaking his hand. Barton (being a direct descendant of Satan) has an average body temperature of around -500°C and Tandy, on realising that Barton was cold, set light to Barton's shirt in order to warm him up a bit. However Barton reacted angrily to this kind gesture. Witnesses claim his eyes became bloodshot and he began levitating around Tandy. He then proceeded to gauging Tandy's eyes out with a perfectly good Cuban cigar. At the sound of dogs barking, Barton fled from the scene through the motion of spiderwalking. Barton has since been blamed for triggering the Smoking Ban.

After this Barton became presenter of the popular gameshow It's a Knockout. His first guests, the Dabo family, also turned out to be his last, after Barton critically misunderstood the concept of the show. 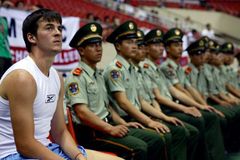 Barton with teammates of the now defunct Barton United, during a loss.

Following Madchester's sacking of Barton, he decided to form his own team in the hope that they would be able to rival his former club. However after the incident with Dabo, finding anyone willing to play for him proved difficult. Eventually he recruited soldiers from the Chinese Army, whom he considered mentally unstable enough to want to be on his team. He called his newly-founded team Barton United. The team got off to a bad start as they lost their first match 37-0 against a Pontins Select XI. After the match Barton put half a dozen of his teammates into comas "for their own good". His methods of discipline have since come under scrutiny; his actions meant the team no longer had enough players to compete and were forced to withdraw from the league. Barton later claimed that without him the team would have been relegated.

Barton has since found moderate success as the banker in Deal or no Deal, where his vast experience of being unnecessarily miserly with money has come in useful (he is known to demand a "loyalty bonus" from each player after every round). Barton's ego is now said to have become so inflated that it has broken away from his body and formed a separate entity.

In June 2011 Barton was linked with Arsenal. The idea was Arsene Wenger would use him to link up with Jens Lame Man who is 249 years old to go out and kill the competition. After Barton killed the entire United and Chelsea squad Wenger denied seeing it and blamed it on Man United ref Coward Pleb.

On the situation Barton wrote on his official Twatter account:

"Fuck you cunts I will kill you you fucking ladyboy cunts".

Barton was kicked out of Newcastle for attacking a giant forehead, the forehead fought back and was cleared of attempted murder. After trying to murder Sergio Kunt Aguerooooooooooooooooooooooo, he was deported to France.

In 2012 Barton moved to France where he pissed off Hugo Loloris so much that he decided to sit on the bench for Tottnum, as the understudy to 285 year old Bad Free Dell. However, after the French began to accept him as one of their own, he became confused and angry and set fire to the Eiffel Tower. Deciding that he was far more feared and hated in England, he returned to QPR the following season.