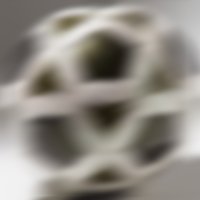 Football Focus is the hit BBC gameshow where those with impaired vision stare at a football and try and identify its make. It started in 1965 when all footballs were made by the same company (Amstrad) and thus it was rubbish. Stanley Matthews still claims this was the golden age of Football Focus, but he's dead and thus his comments should be taken with a pinch of salt and maybe a touch of parsley, then lightly grilled for about five minutes until the comment turns a nice light shade of brown.

The greatest ever Focus was in 1973 (Those familiar with 1972 will know that 1973 was the year that immediately succeeded it, so it did), when Ian Spleenscone, who was actually registered as blind, managed to identify an Adidas ball after focusing on it for only 7.4 seconds. Ian was to later comment, "My whole family came down...it was a wonderful day, I thought they'd throw me an Umbro, but I just managed to glimpse an 'A', I'm very drunk...goodnight...and I love you!"

Over the years of Football Focus, many a man has presented this institution of lovely football sight based entertainment. Originally, and for twenty years, Bob Wilson was in charge. Bob's head is so spherical, many a contestant will jokingly identify the ball as "Bob Wilson". Bob did not always find this amusing, and on a couple of occasions took this as the contestant's official answer. This happened to Brian Fordcar of somewhere 'up north', when he had a run of 9 correctly focused balls. Brian was later to call Bob a C**t!.

Gary Lineker took over when Bob left to go and present another thing on another thing on some channel somewhere. The show lost a lot of audience during his tenure. Some blame Gary's sleep inducing voice, other's say credibilty was lost when they included a yellow snooker ball as one focus. Lineker remarked with much irrelevancy, "At the end of the day, a yellow Snooker ball is worth two points in Snooker."

He's the new bloke and he's doing...you know...the presenting stuff now. I don't want to harp on about it, I'm tired and emotional, just leave me to my glue.

Mark Lawrenson, or Lawro as they call him to shorten the amount of time it takes to say his name, is probably the best known pundit on Focus. His dry sense of humour and comedy facial hair, have long been a staple component of this sight related fun. On a now infamous incident in February 2006, Lawro crossed the line of what was considered acceptable by most people, when, after a nearly blind farmer from the centre of London guessed his focus was a Nike ball, Lawro remarked "It's a f***king rugby ball man, it's not even round you daft c***!"

The nice man of focus, Gavin has been known to assist contestants by whispering remarks such as "it's round", "it's a ball", and of course the famous slow and precise cry of "FOCUS!" Gavin has never married. He says of marriage, "I would rather just go for a walk along the canal."

Digital Versatile Disc apparently not Digital Video Disc. You learn something every day don't you? In this modern world. You get films on them normally.