The Associação Académica de Coimbra - Organismo Autónomo de Futebol are a Portuguese football club from Coimbra. They are well known as Os Estudantes (the child students), and Não Os Briosa (Not the Proud), and their players are referred to as O.A.F.s, playing on the club's initials. In recent years, they are thought of as a team that nobody wants to go down, but everybody thinks they will. Académica themselves tend to get moody about this, as is the norm with any child/teenage-rich company/club.

Académica's parent association, the main Associação Académica de Coimbra, was founded sometime around the early 900s, as a way to make students think they had priviliges. As the years went by, however, the highers-ups realised that the angst of their preferred age group meant that they had to give them something energetic to do. Thus, in 1880, the Organismo Autónomo de Futebol was born (by people not exactly the right age to give birth to the next generation, but nevermind. The higher-ups decided that that was not necessary, and it worked for the next ~120 years. Sorta).

For those without comedic tastes, the so-called experts at Wikipedia have an article about Associação Académica de Coimbra - Organismo Autónomo de Futebol.

Académica's youth program is almost unique, with only their feeder team, Associação Académica de Coimbra - Secção de Futebol doing the same. They pluck graduates straight from university, take them to an Army camp for a couple of weeks, then insert them straight into the first team withput blooding them in at all. This method serves to show Académica as the only real tough guys in the Liga, as well as allowing them to sign talents like Claúdio Pitbull. They hope the effect of the name on their opponents is great. 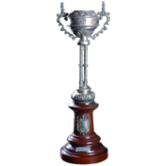 You have to go back an awful long way to find any half decent Académica upsets/thrashings/titles. Since this was five or six generations ago for Académica's style of player. However, such greats as the 6-1 thrashing of Benfica in 1963 have been dug up by the historians making a living at the University of Coimbra. Also, there is the Taça de Porttugal win that does not need the historians, but that is only because of the weak cup on display in the university.

Despite all the evidence for Académica being an awfully mediocre club, they do have some top level silverware to show off. The first Taça stands aloft in Coimbra, and many students in Coimbra fight to the death to see one of only three trophies outside of Porto, Luz or Alvalade. The trophy cabinet itself is made cheaply from MDF that was left over from the students D.T. classes, as they know nothing else will infiltrate it.

The students that make up the majority of Académica's fanbase are sure, every single year, that they will claim the ever-coveted fourth place in the Liga. Of course, these are the same teenagers who think that immorality is good, so their thoughts are decidedly mixed up. Académica have approximately 0.00031415% chance of fourth, that minuscule percentage only occurring if they have an influx of foreign exchange students AND Braga, Belém, Boavista, Marítimo, Nacional, Setúbal, Guimarães, Leiria and Paços all become victims of a deadly superbug. Which could easily happen.

Académica's famous (well, that is pushing it a bit) black shirts originally came, like everything else, from Coimbra's university. They decided that, with all the grumpy students, and the horrible weather, that they'd go the whole hog and wear all black for both the university and for football. The black has also infiltrated into Briosas playing style, a style so dull you'd think that you were watching Bolton Wanderers F.C. This has led to some animosity within the camp, but coach Manuel Machado has quelled it by simply saying that, if the animosity stopped, he would promise they would finish higher than 13th for the first time in living memory. No more arguments were heard.[citation needed]