For those without comedic tastes, the so-called experts at Wikipedia have an article about FIFA 10. 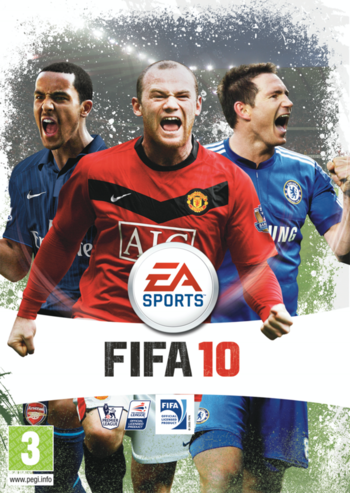 With the World Cup over, many people have enjoyed watching great stars play. Lots of these soccer lovers would love to BE one of those stars. Unfortunately, they're not going to be - they just have to face that fact. So many of them take to video games that make them FEEL like soccer stars. Games like FIFA 10. Today I'm going to review this game, and see if I can feel like a soccer star too.

Logging onto the Game[edit]

Putting the disc into the Playstation 2 with a click, I relax as the game loads. It takes a surprisingly long time. After about an eternity of logos, slogans, and copyright-breaking music, the game finally moves into the main menu. So far the graphics look pretty good. I start a new game. Now, who to choose...? I'll be Chelsea, and the other team can be Arsenal. I start the game and I am greeted by a badly animated stadium, spectators that resemble cardboard cutouts, and bland product placement. But, it's ok. I think.

I take a look at the controls. Pretty simple, it seems. X to pass, O to shoot... Ok, time to start. 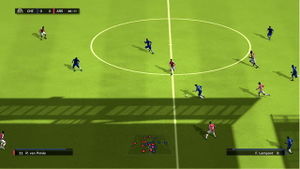 I start with the ball, and the whistle blows. I turn and start to run towards the goals, the ball a blur at my feet. Computerized commentating, music and cheering blazes in my ears. The tension is high. I happen to run straight into the other team and they tackle me, rather unrealistically. Then they turn and run towards my end. Whoever coached my team must have been pretty bad, because my defenders don't even make an attempt to tackle the other players. All in all, it rather looks like they're moving away form the opposition!

I try to change player to catch up to him, but he's going too fast. Luckily I get a defender to move into the centre and block him. Yes! Unfortunately, he just passes to his other player, who takes a couple of steps and shoots. The goalie doesn't even move. He just watches the ball go in. 1-0. What the hell? Am I the only one here who is actually trying to play well?

Ok, I'm starting off again. This time I try new tactics. I pass backwards and let my players move forward, then do a nice long pass into the centre. Yes! It comes down to one of my players but he is slide tackled by the other team. Play on? Fuck this referee! And I thought that guy who referred the England vs Germany game was bad! This guy is shit! The Arsenal player runs up and does some stupid 360 around my defender. No one else to stop him. Runs into the box and shoots. 2-0. Fuck. I'm getting annoyed now. 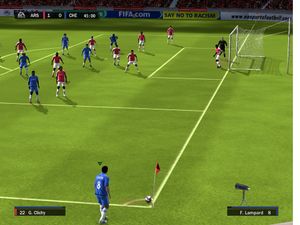 My ball again. This time I try to scoot up the wing. I must admit, the quality of the graphics is quite good. Excepting the player's faces. Ugh. They need plastic surgery or something. I manage to get around an opposition player and then pass to another of my teammates. I try to run into the middle but am forced back. A player tackles me and it goes out. It's a corner! My player lines the ball up. I check the controls book. Ok, I can do a long pass or chip shot. Chip shot for me. I always liked chips. Especially chicken flavored. But I'm no chicken as I take a deftly kicked shot into the middle. The goalkeeper jumps out and grabs it, and then passes it out to one of his players. Shit. That player passes it again, he runs up. I've got ONE defender on my side of the field. ONE! What the fuck is up with that? I try to tackle the attacker, but he skirts around and shoots. This time my goalie makes a bit of a try and saves it, but it just bounces back to the Arsenal guy and he shoots again - and scores. The cardboard cut-out crowd goes crazy.

FUCK THIS GOALKEEPER! MY NANNY CAN DIVE BETTER! AND SHE'S BEEN DEAD FOR TWO FUCKING YEARS! 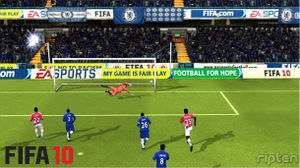 5-0 and I'm not gaining any ground. This commentary is getting more annoying by the second. I swear he's said, "He's going to have to find a better pass then that!" about fifty times. If I was the manager of FIFA I'd fire him. And this stupid referee. And everyone on my team.

I've got the ball and I'm running up the center. The last defender blocks me. Can I get around him? Quickly, I pass to my other player, who runs into the middle! I'm about to press shoot when the whistle goes for half time and my player stops. What? No fucking way! That's shit! 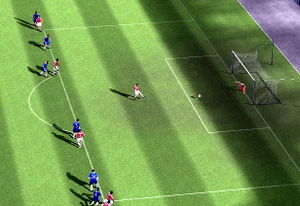 After some mid game stats and highlights, which I suppose are pretty neat, Arsenal have started with the ball. They make a run, and I tackle them and get the ball. Red card? Fuck no! They get the ball back. Free kick up into my box. They've got the ball again, right near my goal! This is crazy. Frantic. I charge one of my players at him but he skirts around me. Shit! I've still got one last defender. I rush forward, slide tackle... yes! He's down on the ground - fuck! Another red card!? PENALTY?!

Oh, the suspense is killing me. The striker lines up the shot. I quickly grab the control book and check up how to save. Not quickly enough. He shoots and scores. Fuck this! 6-0.

8-0 and no change in game style. The other team has got a free kick. "The perfect place to strike a free kick..." comments Clyde Chelsey, the commentator. Man I wish i could strike him. On the head. With a hammer.

Arsenal shoots and scores into the right top hand corner. This is getting tiring.

My ball in the centre. I pass it quickly and make a run up the right wing. I dodge another player, and pass into the middle. My player gets the ball - no defenders. There's no way I could miss! I shoot - and it flies off to the side. No! That's - not- fucking - fair! Fuck! 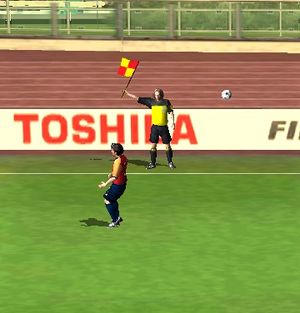 12-0. Game is coming to an end. Commentator keeps saying that the win is out of reach for my team. You know what? If HE wasn't out of reach I'd throttle him. What a little fuck. The other team has got the ball. They're making another perfect run. Almost definitely a fucking goal. They do a nice pass... OFFSIDE! Fuck yes! I get the ball. I'm feeling the moment. Quickly I lance a pass into the middle. It hits my player's head and shoots into the goal! YES!!! I - HAVE - SCORED!!!

Wait - no! It was ALSO offside! FUCKING NO WAY!

The game's ending. Arsenal has another run and scores. 13-0. The whistle blows. Clyde Chelsey finishes with, "I hope you enjoyed the game, I know I have. Hope to see you again, goodbye for now!"

Fuck yes I've enjoyed this game. I also hope it enjoys the bin.

I have rated this game four out of five stars for its graphic quality. I left out the last star because of the fact that it is so fucking impossible to win.

If you want to become a soccer star, try out in the real world. You'll have a much better chance out there.

Now, I'm going outside to have a real soccer game - in the sun. Who's with me?