“It's the greatest cup in the world”

For the uncouth among us who choose lies, the so-called experts at Wikipedia have an article about The World Cup.

The world cup is a planet located in the outer rims of the galaxy, discovered by Mr. R amidst his voyages. Some hypothesis claim that it is the original home of illegal aliens, due to their mysterious rituals that take place every four years, coinciding with current calculations for the planet's rotation period. The world cup is watched by over 1 billion people every year by telescope as it is the most popular world in the history of the world. 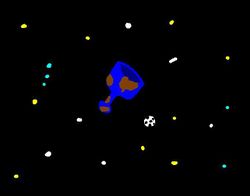 Artist's depiction of the World cup, based on recent Hubble Telescope photography

In August 19th, 1973, the renowned pirate, Mr. R, also known for being Mr. T's gay twin, was messing with his telescope to the sound of Gwen Stefani's If I was a rich girl. He then got satisfied and proceeded on to clear the mess. As he checked through the lenses to see if there was anything gross left, he sighted through those very lenses a peculiar object in the sky. Turn out it was crap, so he pulled a tissue and cleaned it up. He then sighted a planet that had the shape of the holy grail, however, Mr. R was an atheist, so to him it was just a cup.

The international body for planetary recognition (FIFA) was in uproar. Such shape in a heavenly body was unheard of, and this was certainly ground-breaking phenomena (read: earthquakes) in action. Later analysis concluded that there was also a small natural satellite moving erraticaly around the gravitationaly unstable World cup, so it was named Futbol according to the nomenclature convention. The letter T on "The world cup" has also been capitalized in homage to the beloved brother of Mr. R. Reasons for why the name of the world cup, or more specifically, the name of this article, actually began with "the" are unknown, and we can't ask the original editor because he is not available. It is said the british had something to do with the world cup, so the only explanation must be because it was translated from "ye (olde) world cup". Despite Mr. T pitying the foo' that didn't appreciate the discovery, such unprecedent physical characteristics led the World cup never to be officially recognized by the United States of America (most likely because of republicans) as an official planet, with the USA citing its lack of importance in the greater cosmos. Its small satellite, Futbol, also hasn't been recognized, the reason for which was that "a body being kicked around erractically by gravity cannot be considered a proper moon". It is one of two planets with their status disputed, alongside Pluto. Uranus is also very disputed.

~ Mr. R on the discovery of the world cup.

The previous quote was used as an attempt of the Church to claim one more conquest for the christians, but Mr. R later cleared up the situation coming out as an atheist, and admitting he just liked to use profanity.

The world cup is shaped like a cup. It doesn't hold any liquid, although it is mostly made of liquid. Some people say it holds some liquid, but it might be just liquid from the cup. Pitied is the fool who drinks from it. It's peculiar shape is explained by a gravitational pull from an alleged concentration dark matter Epsilon Gamma nearby, and also, because God created it that way. There are actually many explanations. It's albedo is supposed to be an important characteristic consisting of number measurements determining the potential for reflection of light inflicted upon it's surface. Said numbers about the world cup are currently not available, but players complain it has been too light as of lately. Recent analysis by the Hubble telescope show a rotational period of 4 years. It's composition is said to be primarily consisting of sissy boys, homossexuals and women. It is said to be of a very recent planetary formation, with calculations estimating the consolidating it's shape and form around 4,000,000,000 years ago, or around 3,999,994,000 years before the creation of the universe. It's temperature is said to fluctuate at around 69 to 86 Kevin Bacons, a very pleasant temperature for your mom. The moon Futbal's translation period is said to be around 45 minutes, with 15 minute breaks between intervals. Tourism experts are fucking idiots who couldn't find a decent job, but regardless of their opinion, vacationing in The world cup is pretty cool.

Illegal aliens are said to come from this planet, looking for better resources. Apparently, recent study shows the World cup to be full of Yellow Cards and Red Cards, the latter found particularly unpleasant by the aliens. They allegedly immigrate to our world seeking a much more coveted Green Card instead. The planet has been at war and has been recently been dominated by Brazilians. It is presently unknown what this large number is referring to or what quantity it represents. It is said the World cup holds evidence for alien life, therefore disproving the existence of a terrestrial God. This is still a very controversial theory, and God still retains it's status as proven by the scientific community. The potential for the exploration of resources is quite valuable, as Nike reserves some of their asian slaves to work on world cup related products.

Legend has it that there is supernatural phenomena occurring for no apparent reason, source for considerable angst and other emotional disturbances. Currently, the most accepted theory is that, according to the science of Astrology, when the World cup aligns itself with Saturn and Mars, and a body passes through Uranus, offsides happen. There is controversy with this theory as while this predicts most of the offsides, sometimes it fails, therefore Astrology's status as a science has been put in jeopardy ever since. FIFA is currently analyzing this article expecting to decypher the laws governing this phenomenon. [1]

The Italian Football Referee: Requirements for officiating at the 2010 World Cup[edit]

1/ Hate Australian footballers so badly that the Australian Jersey is indistinguishable from the fur of a wild animal.

2/ Be able to read deliberate intent into the most inane and nondescript circumstances such as to be able to red card Australian strikers for standing still and breathing.

3/ Be unable to give the team playing Australia any booking worse than a yellow card and a stern talking to.

4/ Be able to rationalise in one's own mind that just because federation and club officials at Napoli, Fiorentina, Milan and Juventus are corrupt, doesnt mean Italian football officialdom is.

5/ Have no idea who Massimo De Santis is.

6/ Be in total and complete denial that Italian football referees and officials who assign referees to matches are currently under investigation for match fixing.

7/ Be of the opinion that “criminal association” and “sporting fraud” is only a yellow card offense.

8/ Be of the opinion that red carding Australian strikers is good for the game and might serve as a distraction long enough for Luciano Moggi to get out of Italy.