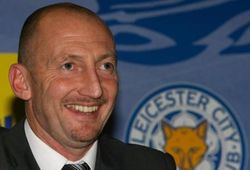 For those without comedic tastes, the self-proclaimed experts at Wikipedia have an article about Ian Holloway.

“Well, I got a brand new combine harvester; I'll give you the key”

~ Ian Holloway on being willing to lend you his car

“Sometimes when you aim for the stars, you hit the moon”

~ Ian Holloway (spoken a while before he joined Leicester City)

Ian Jesus Holloway (born 12 March 1963) is a legend, raconteur and football player from the west country. He played for Bristol Academical FC taking them close to promotion. Holloway also had a very successful period as the manager of Leicester city FC getting them relegated in his first 3 months in charge and becoming officially the worst Leicester city manager in the history of the football club.

Holloway began his career at Bristol Academical where he helped the club immensely with his constant lying and spurious bullshiting which helped in baffling referees on a weekly basis and giving Holloway the long term ambition to lie through his teeth and talk drivel his whole playing career which in turn led to fantastic success when he took over the reigns at Leicester city after successfully helping to sell nearly all Plymouth Argyle's best XI for thirty silver coins before jumping ship.

After relegating the Gundon club in 2001, it took him 3 years to get them promoted back to the old Division One. After that he did nothing of note and was placed on 'gardening leave' after he illegally spoke to Leicester City. Holloway subsequently left Loftus Road sometime after that. Presumably to spend more time working in fields.

The next club that had the misfortune of gracing Ollie's presence with was Premiership side Plymouth Argyle. Surprisingly Holloway did rather well at Plymouth and guided the pasty eaters to 7th in the table, a position he admits was "inspoite av and not becozz av moi input". Holloway's reign as manager of Ivor Dewdney's finest did not last long however as smaller clubs came calling. In October 2007, Holloway stabbed Argyle in the back as manager. What was to happen next would make Holloway a Leicester City legend and make him live on in the hearts of City fans for years to come.

Shortly after he received his 30 silver pieces from Leicester to leave Argyle Holloway was installed as manager of Leicester City by chairman Lord Milan of Serbia land, the owner of Wiltshire Farm Foods. His brief and rather unsuccessful reign at Home Park had alerted Lord Milan of Serbia land to his managerial expertise (or lack of them) and he became the 682nd manager of Leicester's season. Despite a decent start in which he remained unbeaten after one game, Holloway's reign began to crash around him. Despite being given £384 million to spend by Lord Milan of Serbia land, the slap headed tit wasted it on donkeys like Barry 'Slow slow you need to shoot a rocket up the bastard's backside' Barry " Jaffa Cakes "Hayles and Steve 'Cant jump and i fucking well aint going to jump' Howard. On the 4th May 2008, Leicester were relegated to League One for the first time in their history. After this, many fans expected him to do the honourable thing and resign. But, of course, he didn't. On May 23rd Holloway was finally sacked and now faces occasional appearances in a studio for Television X Adult entertainment, with his career as a football manager seemingly in tatters Holloway was appointed managed of Blackpool Pier FC and has high hopes of being able to repeat the amazing feat set by himself at Plymouth Argyle by taking his latest team Blackpool FC to the brink of promotion before jumping ship at the first smell of Silver Coins and leaving them to sink without trace. 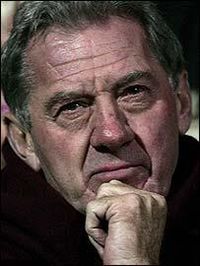 Holloway has suffered from the genetic defect Shit Tourettes since he began management. This is an unfortuante condition that means that Holloway, when giving interviews, excuses and predictions, can only speak utter bollocks. The condition that Holloway suffers from is also suffered by Gordon Brown, Shami Chakrabarthi and Martin Brundle. Some examples of Holloway's Shit Tourettes include:

The condition also means that Holloway's predictions are rather wide(Shit) of the mark. For example, he said: 'I can guarantee Leicester City fans that we will finish no lower then 17th'. The club went on to finish 22nd. Tit.