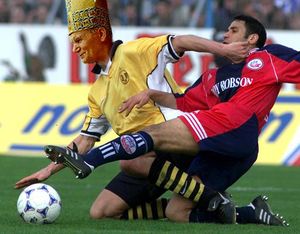 The Dublin Drunken Popes is one of the least successful and most infamous football clubs of the Irish Premier League. Occasionally they partake in Major League Bloodbath play. Founded in 1209 by Pope Sixtus IV (who was exiled to Ireland after a short tenure as host on Spanish Inquisition), the club was originally called just the Dublin Popes, but "Drunken" was added by Sixtus himself while he was drunk.

The club started as a traveling squad and was nicknamed the Dublin Popetrotters. Despite their utter lack of talent, the Drunken Popes would challenge the best team from each potato-farming village in Ireland to a football match. The first-ever match was against the Wicklow Piglets, who defeated the Drunken Popes 142-1. The only Dublin goal was scored three days afterward, but somehow this goal made it into the box score.

In 1258 the club was constantly in debt and was struggling to pay players. It also did not meet Annual Yearly Progress under the No Hooligan Left Behind act, and so it lost its accreditation.

Sixtus decided that it was time for radical change.

Using his connections, he managed to sign Shamus McO'Houlihan, the best player in Ireland, to a 700-year contract worth twelve potatoes.

While this helped with the success of the team, they still were not making enough money. So, Pope Sixtus started taking offerings at games. Ushers would pass offering plates to the crowd, while singing the catchy jingle "Put a coin in the plate while I ring my bell/Cuz if you don't you're going to Hell(or at least purgatory) !"

With the team finally making money and winning games, they decided to apply for the Premier League.

The Premier League was a league of the most Premier clubs in Ireland. Most teams objected to the addition, but fortunately for Sixtus, God was commissioner of the League and let the club join.

The first 700 years in the Premier league were absolutely miserable. McO'Houlihan developed a mental disorder and, believing he was a pine cone, climbed a tree in 1420 and never came down.

The team never qualified for the Ireland Cup tournament, and their pub (the aptly named "Drunken Failure Pub & Grille") only remained in business because of the influx of O'Possums, who are attracted to the scent of failure.

The great Dublin sportswriter Brian O'Brien is famous for his unforgiving accounts of Drunken Popes football matches. Here are a few excerpts:

(Note: O'Brien was increasingly senile, especially in his early 500's.)

There aren't a whole lot of names on this list. 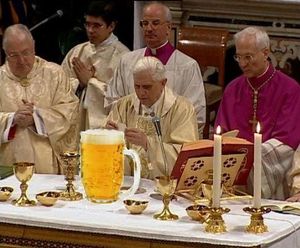 Founder, owner, player-coach Sixtus, or "Big 4", founded this mess and quite often wished he hadn't. Voted "Most Athletic Pope". Once scored a goal. Noted for signing top players for potatoes and driving them into a state of psychosis. Responsible for the Protestant vs. Catholic Shakedown of 1726. Liver escaped 1890.

Forward, Psycho Player 1258-1420. Scored most goals in Drunken Popes history. Married Marilyn Monroe in 1340. Went crazy 1420. Died of Lou Gehrig's Disease in 1789. Doctors were at a loss to explain who Lou Gehrig was.

(No other statistic has been recorded by a Drunken Popes player) 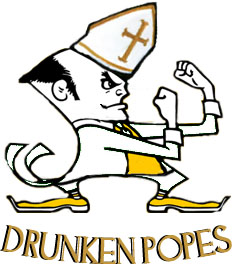