Nacional were founded on the same day, on the same hour, on the same minute as their rivals Marítimo. There was a town meeting called on September 20, 1910 in Funchal, due to the massive riots between the black and white Lords of Funchal, and the working-class people, issued green-and-red jumpsuits, who were rebelling. It was decided that there would be a football match between the two, with the winners thus having control of Funchal. It was seen in the best interests of Funchal and Madeira for the Lords to win, and thus Clube Desportivo Nacional was born, the country's "top" taking on the mainly sea-farers of Marítimo.

The Estádio Eng. Rui Alves is the home stadium of Nacional. Looking at it, however, it would be more akin to be the home of several rats (not too many, though), or possibly one homeless person. It used to accommodate just three people, none of which can sit down to "enjoy" Nacional either getting hammered by Porto/Benfica/Sporting/Braga/Belenenses, or hammering Setúbal or some Third Division side in the Taça fourth round. However, Rui Alves, the supremo at Nacional, soon realised that no-one was coming, so he went ahead and made Nacional the only team in a top-flight league[1] with a capacity of zero. 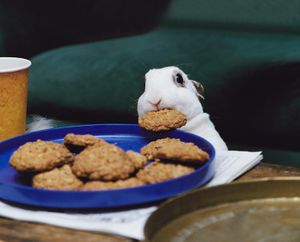 A bunny stealing the favourite food of the Nacional da Madeira players.

Nacional 'da Madeira'''s players are some of the most multicultural, multiweight, and multiability group of professional divers footballers you will probably have seen outside of Portsmouth. Although they all have a panache for cookies, they range from the ultra-slim Luciano Fonseca to the fills-up-the-whole-goal Diego Benaglio. This variation has led to fierce mocking from Marítimo, who "only have footballers, not a circus troupe". Nacional hit back by saying success is better than looks.[2] Recent claims that Nacional are going to sign some actual normal Portuguese[3] players has been met with scorn by the Alvinegro backroom staff, as the have been quoted as saying "We pride ourselves on being the comic relief of the Liga".

In the Portuguese Liga, Nacional are pretty good for the standard of the league, generally being a top-eight team. They did, however, get relegated a few years back, leading to riots on Madeira Island as Marítimo took it way too far. The only survivors were the lucky seven União fans.

Nacional are thought of as an 'unfashionable' club in the Liga. This is due to many things, such as their uncanny ability to always be the opponent in crunch games, as well as their empty house stadium. Nacional actually encourage this, as quoted by Rui Alves; "We don't want any expectations".

Nacional occasionally enter the UEFA Cup, always popping up whenever their finances need a boost. However, teams see the as chicken feed, and certain teams actually bribe UEFA to draw them. Nacional actually at first favoured a Madeira/Açores breakaway from Portugal for the Champions League money, but eventually came to their senses when they realised that if they couldn't beat FC Rànger's, they would never beat the likes of AC Milan and Liverpool FC.

In Madeira, where it is known that they will never win the title due to a lack of persuasiveness, they hold a competition wherein whoever finishes highest out of Marítimo, Nacional and União Madeira, as well as Santa Clara and Operário from the Azores wins the unofficial Trophy of the Island. Nacional currently are second in this, winning a few less than Marítimo, but many more than the other three combined, who are the butt of many jokes from the Madeiran "giants"[4]

There has been a long-running debate in the corridors of power (Rui Alves and his wife) over whether the name Clube Desportivo Nacional should have no postfix, the postfix Funchal, or the postfix da Madeira. The row centers on the fact that none of the three top Madeiran clubs show their heritage in their names, leading to less publicity for Madeira. However, people on mainland Portugal feel that all this is just a massive waste of time, at leaat, that's what they said before the zombies went back to the big three.

After rejecting a bribe from the Funchal government, Nacional decided not to use Funchal. However, the other two remain up for grabs.