“Such skill and presence never before known in a football player.”

“If only I'd stayed at West Ham, then I could still call "The Genius" my teammate.”

“He broke my heart.” 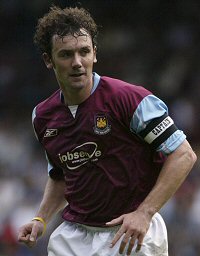 The legend at work

Some point around the dawn of time, Christian "The Genius" Dailly is said to have spontaneously come into existance. The only known witness of this event is the lesser known God who claims "It was the most beautiful thing I ever saw". Later in his life Dailly was attributed to founding Scotland and then England upon realising that Scotlands football teams are and always will be complete shit.

Also known as "The Footballing Genius," "The Total Footballer," or "God", Christian Dailly is a Scottish footballing international who is currently gracing the club team West Ham United with his presence. Throughout his playing career which has spanned infinite plus one years, he has accumulated over 83,794,729 goals. While it is true that all of these were own-goals, he is still widely regarded as the best footballer of all time.

At the onset of the second World War Dailly rushed to nazi Germany to be at the side of his lover at the time, Hitler. Although the eccentric leader was the main public figure of the nazis, recent discoveries of papers and documents buried long ago beneath Berlin, show us that the real brains behind the campaign against Tottenham supporters was in fact, Christian Dailly. This, it is believed, was the beginning of the downfall of the nazi regime. It is known that Dailly would often dress as a dog in order to avoid the limelight. Documents written by Hitler himself show that he would often confide in Dailly late at night when in bed together. One such diary wrote "Christian, my rock, my man... my manly man. He would mumble things about making moves towards London, about destiny and all that, as i playfully nibble on his genitalia". Before Hitlers death, he gave birth to a single child who it is thought could be Daillys. Click here: [1]

In 1946, Dailly signed a schoolboy contract with South Oxfordshire Heath FC of the Scottish Southeast by South Counties Division Two. He made it into the first team two years later after fighting off a severe case of the clap. Manager Leroy Parnell Johnson played Dailly exclusively at right back during the season and was impressed with Christian's ability to blow just about every play, and player, that came his way. After the 1949/50 season, a season that saw South Oxfordshire Heath promoted to Division One of the Scottish Southeast by South Counties League, Dailly was sold to Brammell Ewood FC United for a transfer fee of a dozen tracksuits and a case of Red Bull.

After the 1950/51 season, Dailly took part in a secret military experiment conducted by MI-5 and the National Health Service. He was cyrogenically frozen and placed in suspended animation until such a time as Scotland qualified for the World Cup. Then, if all went according to plan, Dailly would be unfrozen to sabotage the national team and give the cup to England. Dailly was scheduled to be thawed out in time for the 1966 World Cup, which saw West Ham United defeat Germany, but the freon levels in the chamber reached dangerous levels during the dethawing phase. As a result, Dailly was kept on ice for three more decades.

The genius doesn't play for West Ham as often as he used to due to his commitments captaining the Earth XI in the universe cup. He is the first West Ham player to be awarded this honour due to his unbelievable footballing abilities. As a result of his efforts the Earth XI just reached the final, thanks to Dailly's last minute zero gravity defying header.

Christian Dailly's hair has recently become a figure of national debate when upon further analysis from the police as to how he gets it so curly, it was discovered to be a wig made from the pubes of 46 year old virgins from Dundee. This astounded many West Ham United fans who abruptly posted a press release stating they would no longer allow him to shag their wives. Distraught at this prospect, Dailly has spent recent months hiding from the general public on the West Ham bench, along with Teddy Sherringham (96), Alf Garnet and Bagpus. Christians hair is sponsored by Pantene Pro V and wigs are available on 07860257827, just ask for Michael. Only £6.99 including p&p. Call before 12pm tomorrow to guarantee before the Chelsea game!