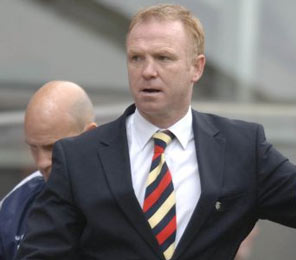 McLeish leaves Holyrood for the last time in 2001 as he stands down as First Minister over the Officegate Scandal.

For those without comedic tastes, the so-called experts at Wikipedia think they have an article about Alex McLeish.

Alexander "Big Eck" McLeish (born 21 January 1924), is a Scottish politician turned football manager. From 2000 to November 8, 2001, he served as the second First Minister of Scotland following the sudden death of Donald Dewar Jock Stein. McLeish was the Member of Parliament for Aberdeen from 1978 to 1994 and MSP for Motherwell from 1994 to 1995. He is currently manager of the Scotland national team as the SFA saw that a former footballer turned First Minister turned footballer would be the perfect appointment for the vacant Hampden hotseat. Unfortunately for the Scots he quit a year later to join one of football's biggest club teams... Birmingham City. He is now Dictator at the American colony of Aston Villa FC.

Even before Big Eck made a move into politics, he was a professional footballer playing for East Fife before a spell at Leeds United. He also represented Scotland as a youth international before he joined a Labour Party rally in Glasgow where he met his older pal Alex Ferguson who talked him into the whole politics idea. However, after seeing how much money and fame Ferguson was acquiring at Manchester United, he decided to step down from his role as Scottish First Minister and gave his position to Jack McConnell. This was also aided by the Officegate Scandal where he was thought to sub-lease his Westminster office to Alex Ferguson while he was scouting in London for a week.

McLeish had made a couple of brief appearance for Aberdeen FC while he was MP for Aberdeen South (now Nicol Stephen's constituency) as Willie Miller (Dons captain at the time) often disappeared the odd week or two to get his moustache trimmed. After failing to hold down a first team place at Aberdeen, he was able to get several reserve games at Motherwell where he was later voted in after a the well covered Vote Big Eck Campaign where he promised to safeguard Ravenscraig and take the Motherwell football team into Europe. Even though he only managed the football bit, he was appointed full time manager of the Motherwell club before trying to prevent getting relegated to the Scottish First Division (now the Irn-Bru Division One). So what did he do the next season after avoiding the drop? Well, he moved to manage Hibernian who were in the First Division where the standard was much lower and easier of course.

After spending a few years of getting fed up of Edinburgh however, he moved back across to his native (and far superior) Glasgow where he undertook the massive task of 'managing' Glasgow Rangers. Here he was a notable success (highly debatable - citation needed), winning two SPL titles, 5 domestic cup trophies, the European Champions League (Central Scotland Region). He later said that he would not manage another Scottish club, because he felt that he had achieved everything in the Scottish game, this obviously including having the worst run of any Rangers team, 36 games without a win during season 2006/06.

Alex on his resignation sacking from Rangers then spent a year in limbo in which he went back to politics to try and carry on anti-sectarian programme which he had started at Ibrox. Sadly for McLeish, his more recent and controversial Send the Tims Home Campaign was not warmly welcomed by many of the Glasgow Bridgeton constituents as his answer for ridding Scotland of sectarianism. Therefore when Walter Traitor Smith took the position of sacked Rangers Manager Pepé Le Pew at Ibrox, a desperate Scotland national side appointed him as manager where he led them to glory over Italy and France. Now feeling as if he was a football manager god. He quit Scotland and moved to the biggest club in Europe mmm a club really no bigger than Hibs, Birmingerham FC.