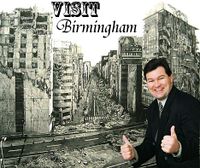 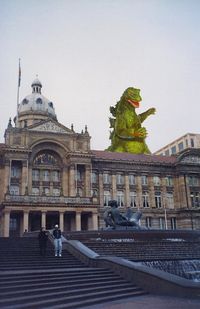 Godzilla pictured on a fact-finding visit to Birmingham.
Whoops! Maybe you were looking for the city of the same name with a baseball team?
“Look At moy! Oym frum Burrminum!”

“England's second best city. Or maybe the third or fourth. Or perhaps a few places down. Anyway, I'm fairly sure it's a city at least. Isn't it?”

“Birmingham is a fucking shithole!”

Birmingham is the world's best city and biggest city unlike that shit hole up the road Mankychester. Areas such as Chelmsley Wood are setting trends for the rest of the country and looks to be the place to be of the future.

Birmingham or Brummie-ham is located in a huge bomb crater somewhere in the lost lands of the Midlands, Birmingham is where the people of England go to die a horrible death. Inhabitants are required to serve at least five-nights a week in the underground Utterly Butterly mines (pronounced "Utter-lie-butter-lie-moynes" in their yokel tongue).

It is one of many English city centres to be designed by Adolf Hitler, who in an act of benevolence attempted to bomb various putrid cesspools off the map during World War Two. When this failed and he lost the war, the big cry baby got his revenge by designing nightmare concrete buildings, utterly miserable public transport and sadistic traffic systems. For this reason Birmingham has been designated an IKEA World Heritage Site.

By Royal decree, everything in Birmingham must be 33% less polluted than London in order to fit its status as England's third most polluted city. Birmingham regularly surpasses this target and most things in Birmingham are radioactive.

The local speech is limited to only the simplest of words, consisting mainly of: "Foock", "Bolucks" and "Maaaam, whoi was we 'av to be bawn 'urr?". The dialect can also be thoroughly re-enacted by getting absolutely sloshed and punching oneself until on the verge of unconsciousness before attempting to speak.

The city was founded in 1836 by Ozzy Osbourne's father, who beat the Zulus in the Battle of Tesco Car Park (1835). He was so horrified by what he had done that he spent the rest of his life drunkenly beating his son until the hapless sod agreed to marry Sharon Osbourne. 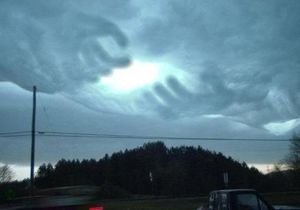 God taking a shit just before Birmingham was created.

Birmingham was regrettably placed on the map when local resident Jasper "Ginger" Carrot found out how to build crap whilst on the 12:17 to Penzance. During the next two dozen minutes, several factories emerged in Birmingham, building everything from shit to shit, ships to Kendal Mint Cake and a bit more shit.

Jasper Carrot then found some balls (not his own, mind you), polished them and performed a "James Bond" on them turning them to gold, and has bored the rest of humanity ever since. Apart from his homoerotic venture with Robert Palmer Powell, The Defectives.

Birmingham City has one library, known as the 'Turbo Library', which is said to have 17 books (that have never been read). Birmingham also has three University-type establishments of learnery, highly popular amongst students and vagrants alike - The University of Tub, Birmingham Shitty University, and The University of Bitch. These establishments regularly come 30th, 12,079th and 15th respectively in the Times University League tables. Most Brummies in their spare time like to drink Vimto and chardonnay, or as pronounced with a thick Brummie accent "Vimtaaaw ind chardonaaaaaaaay!"

Youths can't step outside of their own postcode, without getting stabbed greeted by youths from different postcodes. Aren't we Brummies lovely people?

Eating processed shit products and battered sausages is a popular replacement pass-time. Gimp-suit clad residents of Birmingham Chavs regularly compete to see who can eat the most bits of mashed up pig, sheep, cows, dogs and the by-product of a monkeys anus in grotesque abuses of the human body not seen since the height of Kazakhstani emperor Borat rule. 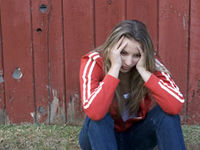 This woman has just been told she was born in Birmingham.

If we regard humanity as a pool of congealing tramp's vomit, the people of Birmingham would be a half digested piece of carrot. Not terribly attractive, though not as bad as bile (the people of London's East End) and possibly with some nutritional value. The people seem to believe that Birmingham is the "second city" because of being the second largest metropolitan area in England, but at the end of the day, nobody cares. Particularly the self absorbed people of London, who couldn't give a fuck about anywhere outside of their boundaries. The city also inhabits creatures known as Chavs, (pronounced Kuntz). They lurk around street corners and if you're lucky you could be stabbed for a minimal price. There is concerns however of a possible decrease in their populations in the city if David Cameron (leader of the Cun- I mean Tories) takes over in his quest for world domination

The people of Birmingham are known as Brummies, usually in such eloquent addresses as "Shut your fucking gob, you ugly fat fucking Brummy bastard" (Prime Minister's question time, April 2007).

One other sign that someone is from Birmingham is their horrible, rough, underclass accent.

The world record for fruitless scratch card scratching and bitterly screwed up lottery tickets is held by the not terribly proud people of Birmingham. 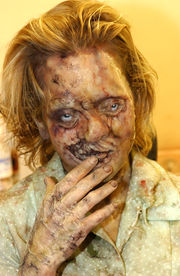 The winner of "Miss. Birmingham 2007" stunned the judges and was later branded "The Most Beautiful Woman Ever To Have Come Out of Birmingham, she looks like a train wreck".

Two schools of thought exist regarding the future development of Birmingham.

On September 13th 2010, American video game developers Bethesda Softworks announced that the city of Birmingham would be used as the setting for their upcoming Post-Apocalyptic RPG Fallout 4, the follow-up to Fallout 3 (2008) and Fallout New Vegas (2010).

Bethesda's Pete Hines said "For (Fallout) 3 and New Vegas, we had to take thousands of images from vibrant cities, render them in CG and re-imagine them as post-atomic hell holes. It took years. For Birmingham, we took two disposable cameras from Boots and an afternoon."

When later asked what the most challenging aspect of turning Birmingham into a mutant-infested wasteland was, Hines simply laughed deviously, grabbed up two bags of money and a Ginster's Chicken & Mushroom slice, and bolted from the room.

The following is a rough list of the planned DLC packs for Fallout 4, recovered from a napkin Hines left behind:

Due in part to its location in middle hell, Birmingham is a delightful village; its clean air, sparkling fountains, and beautifully mountainous scenery attracting many an international tourist for a holiday sojourn.

Birmingham's New Street Station plays a central role in causing disruption to the national railway system due to it being a dark, dank pit in the ground which someone made the mistake of running rails through instead of a stake or a hub. Trainspotters consider the place something of a challenge due its lack of trains, and so travel many miles to New Street, in an attempt to spot its elusive trains (forgetting in their excitement to spot the one they just used to get there). 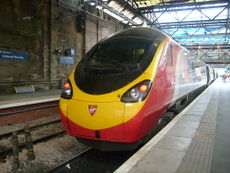 The only Virgin seen with any degree of regularity in Birmingham. It stops in New Street Station. Not on time, but it will arrive.........some time.

Because of concerns raised by Human Rights Watch and Amnesty International, Midlands County Council spent a considerable amount of money in 2011 to develop New Street Station into a giant, gleaming, microwave cooker. Waiting times have been cut in half, though timetable troubles - those mischievous scamps which charm the country with a wink and a hat tip; which have been insoluble since the time of Christ - must sadly wait until His return. We simply lack the tools to unravel the sins which led us here. C'mon man, it was one fucking apple. 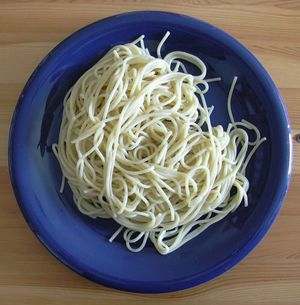 An aerial view of the World Famous Gravelly Hill Interchange which is argued to be the most complex motorway junction in the UK. It was designed by Ozzy Osbourne during a particularly crazy drug party and is considered the height of Birmingham's architectural achievement. We can understand why...

Birmingham's roads are used for the local sport, sitting in cars whilst beeping. The sport is enjoyed by 107% of the city population, who often participate soon after they finish work. It is also popular to eat at local restaurant, 'Spaghetti Junction'

Travel to Rome severely restricted pending construction work. As an alternative destination the attractive Worcestershire village of Redditch is highly recommended, although only to those with a current Valium prescription. Many of the roads are being dug up because people don't want to go there.

Birmingham's claim to fame is having more miles of drain than anywhere else in the world. Birmingham has two major rivers; the Rae and the Cole. Rae is Brummie for a dirty little stream full of shopping trollies and assorted other shite that spawns genetically altered mallards that eat mouldy bread off the bank and drink only extra strength cider discarded by the dead drunk tramps that litter the riverside. Cole is Brummie for shitty river, quite literally since it runs through cannon hill park and the Nature Centre which are full of shit. In fact the Nature Centre was built on a huge pile of shit sometime in the middle ages by a man called Jeremy Flobsbottom who wanted a toilet for his pet Big Bird. 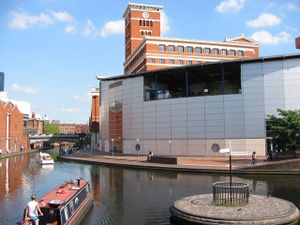 Old Turn Junction - plans for a complex, free-flowing interchange were eventually scaled-down to a simple roundabout

In 1820 Thomas Telford began construction of the Birmingham Main Line canal, which would terminate at Old Turn Junction in the centre of Birmingham. The original blueprints show that a large interchange was planned comprising of a canal fly-over, numerous slip channels and a tidal-flow system on an elevated stretch of canal. Local businesses backed the proposal, pleased with the extra traffic the junction would accommodate. The interchange was affectionately nicknamed Tagliattelle Junction.

Local residents were not so delighted by the prospect of having the most complex waterway junction in the UK on their doorstep. They argued the iron troughs and support pillars would be unsightly and the excess noise of water lapping up against the side of the narrow boats would cause them undue stress. Protest marches ensued, public consultation meetings held and petitions signed. After much debate Telford backed down on his plans and a simple roundabout was installed instead. Thereafter, the high volume of traffic on Birmingham's waterways always resulted in jams and Birmingham was known throughout the country as a traffic hotspot.

If one was to be unfortunate enough to have to communicate with someone from Birmingham, the language is straightforward. Simply replace all vowels in English words with an 'err' sound. Congratulations! You can now speak fluent Brummie.