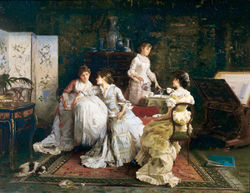 A wealthy aristocrat and her daughter prepare for an afternoon of tea and strumpets.

Partaking in tea and strumpets was a popular pastime in Great Britain during the Victorian era.[1] Though the practice never gained the popularity of the less illicit tea and crumpets due to the fact that prostitution, associating with someone of lower social class than yourself, and sexual intercourse of any sort were frowned upon in Queen Victoria’s England, the enjoyment of tea and strumpets by the aristocracy of the period was nonetheless an important and extremely stereotypical facet of Victorian British culture.

Though tea was first introduced to Britain in the 1670s by the Portuguese Catherine of Braganza, queen consort of Charles II, the popularity of the drink would not take off until the 19th century, when the British Empire gained control of India, and, by extension, much of the world’s black tea. It was also during latter period that British culture discovered its penchant for producing cheap Cockney prostitutes, downtrodden women that were victims of the socio-economic impacts of industrialization, the class-based prejudice of Victorian England’s stratified society, and the poor cocksmanship of many an uptight[2] male aristocrat. It would prove to be only a matter of time before those that could afford fine imported porcelain tea sets and weren’t fazed by the risk of contracting syphilis sought to combine the two pursuits. 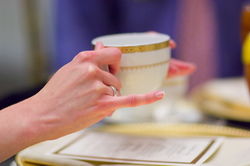 Whilst in the company of prostitutes, it is considered good etiquette to drink tea with one’s member erect.

By the early 1880s, the practice of shagging a prostitute over a cup of tea had become a regularized, almost ritualized act with its own rigid rules of etiquette. The process invariably began with the water for the tea being boiled and then poured into the tea pot, and then stirred to warm it evenly. The teabags were then repeatedly dunked into the lady’s mouth before being added to the pot, though this step was often forwent if loose tea leaves were being used instead. Teabags were popular in Victorian England, however, so they were more often used, and were added to the pot according to the mantra one per person and one for the lady.[3] The tea was then allowed to boil while those partaking prepared for drinking. Milk, crème, or other substitutes were added to individuals’ tea cups according to taste and personal preference.[4] Finally, the tea was poured and consumed, with the stray tea leaves being strained through the hair of the lady’s erogenous area if loose tea leaves were used. What followed after this point was often not recorded or mentioned in erotic tea literature of the time, as it was considered quite naughty.

It should be mentioned that some degree of variation among these rules of etiquette existed, with variations often breaking on lines of class and upbringing. To middle class patrons, for instance, drinking tea out of the saucer was often considered acceptable, but a breach of etiquette to those from the aristocracy. Likewise, drinking tea out of a prostitute’s navel was considered acceptable to upper-class tea-and-sex aficionados, but was considered a potential waste of expensive tea for many members of the working class, who therefore shied away from doing so. Finally, many enjoyed their strumpets covered in butter while some did not, though this often broke along lines of personal preference rather than lines of class. 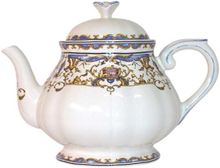 There’s a reason a teapot’s spout looks the way it does, but it’s best not mentioned in polite company.

Because of its popularity across all manner of class lines, the phenomenon of enjoying a cup of tea whilst bedding a prostitute greatly impacted Victorian culture. Indeed, the many of these cultural impacts can still be appreciated today. Perhaps the greatest and most evident example has to be the term “teabagging,” a slang term meaning “to dunk a teabag into another’s [the lady’s] mouth” (see the section on etiquette). This, however, is far from the only example. The difficulty in removing ladies’ whalebone corsets before the act was performed caused many a frustrated aristocrat to politely and formally complain to the companies that made these garments with requests that they be made in a less constricting fashion, an important first step toward less utterly uncomfortable clothing in the budding women’s rights movement. The tendency of tea to be enjoyed alongside sex also impacted the very design of tea paraphernalia, as can be observed in the picture on the right.

Tea and Strumpets in Other Cultures 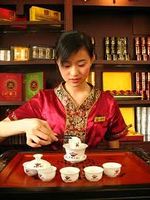 An example of both Chinese tea culture and the poon tang often enjoyed with it.

Though Britain is certainly the most notable culture to mix tea and sex, it is far from the only one. India, where Britain got most of its ubiquitous tea, also combined the two—there are seven Kama Sutra positions that involve tea, for instance. The Chinese, Korean, and Japanese cultures also enjoyed chai with their poon tang,[5] though the Chinese tend to prefer green or oolong tea and the Japanese tend to prefer young or very young girls.

Consuming tea in a sexual context is much less popular, by way of comparison, on continental Europe, owing mainly to the lack of tea. However, this hasn’t prevented the many cultures of Europe from combining sex with other, more indigenous drinks. In Germany, beer is the drink of preference, and having sex with prostitutes while drinking beer has spawned many extremely long angry-sounding compound words to describe the process, including Biergutesbrustefickengemütlichkeit, meaning “the warm, pleasant, homey feeling one gets from tit-fucking a prostitute while said prostitute holds your beer stein.” In other parts of Europe, other practices are common. In Italy and France, coffee is the beverage of choice, and in Switzerland threesomes between a man, a prostitute, and a large piece of perforated cheese are par for the course.