“What the hell is this written in, 'Crap English'?”

“I rogte nat a bene for thys jackanapes.”

– The Wife of Bath on Chaucer

“Please, someone pay attention to me...”

– Chaucer on The void of Chaucer scholarship

“I nevar putted mine penys up any persin, instead I savoured'st it for mine own personal plasure”

– Chaucer on Mastubation and such things

Geoffrey Chaucer -- writer, herald, scholar, accountant, politician, Assistant Secretary to the Department of Horse-driven Vehicles, pianist, laborer, window painterer, orgamist, organist, violinist, cellist, flautist, bassoonist, 14th Century manuscript maker, bar tender, plague dodger, pilgrim, hive worker, saint, heretic, Pope, comptroller, and lover -- was born in the 14th century. Though he was a skilled poet, his true passion was origami. In 1402(ish) he was mistaken as John Wycliffe and assassinated by albino monks. While 82 manuscripts of his work have passed down to us, none of his origami has survived.

Who the Fuck is Geoffrey Chaucer?[edit] 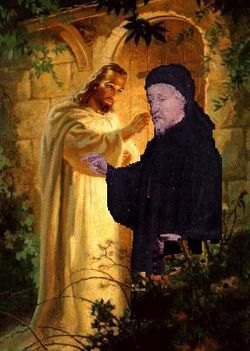 Chaucer and Jesus: In this famous picture, Chaucer sends Jesus away, because Chaucer always knew better than some random prophet.

“He's no William Shakespeare, that's for sure!”

“Who the fuck cares?”

– The Gawain Poet on Chaucer

Unsure of his exact age, scholars have suggested that because of his language, he must have lived sometime between 1337 BCE and 2047 CE. His work is dated in the 14th Century, though as a Henry James once said, "Chaucer is timeless". Henry James said a lot of things though. The fact of the matter is the fart of Chaucer's work has disseminated, like the holy spirit, into the the hearts of all who read him, penetrating our minds like a lusty bull thrusting its loins into the bail of hay that is literary criticism. 081810 library Chaucer spent the first years of his life in forty-seven different schools. Never quite finding a passion, he settled on a government job. "It pays well", he said, "but watch out for the Yorkist bastards -- or was it the Lancasterist? I never bothered to study history, I mean present!" He worked for the government for two weeks before getting a different job. Though he held many jobs in his life, he was never able to fulfill his dream of becoming Queen Latifah.

In 1568(ish) Chaucer was granted immortality by one of the muses...it might've been Calliope, he can't totally remember as the absinthe was particularly potent that night. Though he has pleaded for death, as evidenced in his retraction of his best known work the Canterbury Tales, he continues to inspire us today. Unfortunately, he is frequently misunderstood in our time. As a result of his confused language, he has been mistaken as a mentally retarded receptionist, and since 1999 he has been protected by the Britons with Disabilities Act. All public buildings must now have 14th century horse stalls near the entrance and bung holes in the basements.

For those without comedic tastes, the self-proclaimed experts at Wikipedia have an article about Geoffrey Chaucer.

“I wrote the damn thing as a joke. For God's sake, I replaced every 'i' with a 'y', and I misspelled like every other word. The Book of the Duchess was my true masterpiece.”

“The Book of the Duchess. You've never heard of it? Are you shitting me? There are entire college classes dedicated to Shakespeare -- freaking Shakespeare -- yet people are still unfamiliar with my work! Shakespeare sucks in every possible way, including that way!”

– Chaucer on Why he drinks

– William Shakespeare on We're not sure

“What, are you kidding me? You didn't even write your own material, Jackass!”

“Quite. He stole all his material from me.”

The Canterbury Tales is a collection of 92 fragments written on soiled napkins and tissues found in a jar near Dover Beach. Scholars haven't felt like translating the work, so it remains today in unreadable Middle English (at times due to its inability to be read, it is called "Old English in a blender", or "Modern English with retardation"). Here is a sampling from the "Basic Introduction":

Published in April with Shorisoti that bathes then Drogti in Bersid march to Ronnie and Yene in each one of the clock of Uykur, that countless words of the virtue carefully. EEK Of Jong Ziveros B'rith with shouts, Soete that is happening in each one and brezo Krobis that this episode has lead to the extension, of Yonge and shouts in Ramallah its Eroni to attend these sessions and in smale McCain, Milodie de Fouilis any night of aluminum of Silin with the open eyes) of the nature of this Brikitherandes to Koragis to the hares. The people of Ongen as of the second to étin of criticize in élerinages of P. and to Balmeris in Seiken in which Strondes Straungi Halois those of distant spot, to Kouthi Ondes Sundre so. Specially of the end of each one of the counties in the finding of Ngelond Kantherburi that holly Blesvol Kimbelengue this to the wild Holben Martyr then more ahead, than had a Seki.

About Chaucer I will not speak.

Those before me, and from last week,

Have said all there is to say.

Except one thing, if I may?

This author, this poet, a ‘valettus’ and squire,

Has changed the idea of a literary character,

Thinking, of course, of the time it was written as a factor.

He portrayed them with unprecedented realism,

With vices and virtues, by various a mechanism,

He made them more multifaceted and human.

Some say a soul he has given them.

From Shakespeare to Freud, all post-medieval authors,

Enough of Chaucer the writer!

Let me tell you of The Knight’s Tale, it’s brighter!

As the rules were set in that tavern, before,

Where they all agreed and none said ‘what for?’

The Knight’s was the first tale to tell,

As the shortest straw on him had fell.

Long ago in times of Ancient Greece,

Where it is hard to find some peace,

The city of Athens was ruled by Theseus;

He comes across two soldiers with pains,

Cures them and puts them in a tower with chains.

From the tower one day, Palomon spots a maid.

Imagine all those years without getting laid!

He instantly falls in love with her.

Sees this lady too, and argues for her love,

But stuck in jail, her below them above,

No use to struggle in that hell.

Perotheus appears one day, I will not dwell,

He speaks to Theseus and sets Arcite free,

“Never enter Athens again or death will be!”

Was the ruling of the duke that day,

But Arcite was sad to leave the maid: “No way!”

He thought Palomon was luckier in staying,

A dirty trick and take the maid with him.

So here they were, both out on a limb.

One free and safe, the other chained in a tower

But for yonks Arcite was without power.

Growing thin and guant from lovesickness

While Palomon is full of homesickness.

And tells him to return to Athens, for a sight.

Arcite returns thus so and takes a job as a page,

Burying all his pride, love and rage.

In the bushes a little later,

He meets up with his hater.

Palomon had escaped from jail,

Without even paying bail!

In a big fight they got,

When the duke appears at the spot.

Palomon, the winger, pleads for his ruling,

But the duke’s lady knows they’re not fooling.

So Theseus orders them to find 100 men, To battle it out in a stadium. 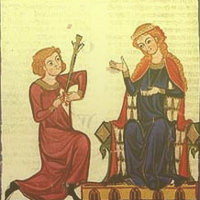 Many of Chaucer's Tales reflect the lives and loves of the common people.

Violent. Chaucer once responded to a critic of his work through the less than subtle medium of numerous heavy blows with a golf club to the general testicular area. As a result, people who criticised Chaucer's work were stereotyped as having high voices.

Now pray I to all that hear this little, that if there be any thing that displeases him, that was not my intent and a fault of my inabilities as a Uncyclopedian. For our site says "all that is written is written for our indoctrination" and I have tried as I may, may the Lord Jhesu has mercy on me and forever my guilt. I revoke this page, just as I revoke many another thing you don't care about. I revoke everything except a translation I did of Dante Rossetti's Pandora, though that poem was already in English so I guess that didn't count. May the Lord Jhesu die extra hard to forgive me of this sin so I shall be saved. Qui cum Patre et Spiritu Sancto vivit et regnat Deus per omnia secula. E pluribus unum. Amen.