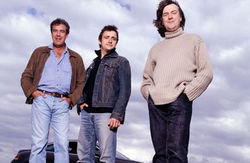 James May, in his dreams...

“I have soiled myself!”

~ James May on supercars

~ James May on Lady Gaga

“This man stole my clothes.”

~ A perturbed Jeremy Clarkson on James May again

James May (born 4th September 1860) is an eccentric toy collector as well as "the other guy" on motoring show Top Gear. His driving style can be defined as comedically slow, earning him the nickname Captain Slow. Next to Richard Hamster and Jeremy Clarkson, he has been an essential part in the presentation and maintenance of the motoring show Top Gear.

Sometimes nicknamed The Other Guy, James is renowned for his ability to makes snails feel good about themselves by driving supercars at a snail's approximate moving speed. That was a sarcastic comparison - a hundred more of those and I could replace James May as the other guy on Top Gear. But I won't.

Born into a family of eccentric toy collectors and slow drivers, James grew up in an upper-lower-middle class housing estate in the south-western region of north-east Britain. Being unhappy with his family life, James adapted an esoteric way of thinking, bought his own car and fucked off on a quest to find true happiness. Unfortunately for him, the closest thing he could find to true happiness was a presenting job at motoring show Top Gear, which is where he currently works and lives.

As a presenter on Top Gear, James has achieved many things. He was the first man to drive a supercar with a serious look on his face, as well as the first Top Gear presenter to go through a whole episode without making fun of one of the other two. He was also the Black Stig.

James, unhappy with his progress as the other guy in Top Gear, branched out his presenting abilities in a number of other shows, such as James May's 20th Century, a show which remains blissfully unaware that the 20th century ended some time ago; and the one where he collects toys, being blissfully unaware that most people who are watching the show also grew up with the same toys. These minor flaws have earned the shows hefty sections of time on the Dave channel, rather than their intended place on BBC1. Oh, and there was also one where he dissected a shark, apparently. He was also smothered by a tramp beard on BBC2's shooting stars.

James owns a Ford Fiesta, an ashtray, a Lambouroghini (or Lamborghini, or maybe Lamboroghini? I don't know) Murcielago, a Bellanger-Denhaut 22 twin-engined bomber/reconnaissance flying-boat, a brown horse called Walter, and a Spitfire, all of which he uses to travel to the Top Gear office every morning.

Good news! James is also an avid fan of the Dacia Sandero!

ALSO, the Stig is.....wait for it......Ben Collins, yes everybody knows now, the new one is probably a turtle.