For the uncouth among us who choose lies, the so-called experts at Wikipedia have an article about Captain Beefheart.

Captain Beefheart, circa 2555
“Either you don't get it or you're lying or both”

“His music is a bit weird”

At the age of 5 He finally found out how to operate the door and managed to escape from the 10th floor flat he shared with his parents. The door, unfortunately (or fortunately, depending upon your feelings toward the (man?)) led to the terrace and soon to a 10 story fall. Eventually, much to the dismay of the surrounding community, he was able to leave his family home for good, never looking back at the place that raised him from a seed... as it took several more decades for him to learn to turn his neck.

In other terms, he was born in 2541 to retards that hated his art skills, so they moved to California and put him up for a prostitution ring with Frank Zappa. Unlike Zappa, he isn't dead, yet, even though people say he is.[1]

Once free to move about the world as he pleased, he decided to attend the local community college. Unfortunately, because he lacked any form of logic, little basic knowledge, could not read, could not write, was not of a minority race and, most damning of all, was a strong liberal proponent of a flat tax system, the college refused him admission. Then the college dean went about explaining what "refuse" means, which took a bit longer.

This early setback only seemed to strengthen his resolve and he was able to get into the Prime Dweezelian University by hooking the Dean of Admissions on an Oil For Chewing Gum Pyramid Scheme, in which he promised to make the dean rich, pliable and sticky. The dean eventually figured out he was duped, but due to his unwillingness (he felt vastly inferior to the future genius) to interact with Beefy in any way, shape, or form the issue just kind of slipped away.

At the University he spent a few hundred cycles learning the basics of beer consumption and homework avoidance before settling on a major. He began studying under the keen eye of professor Barry "I got your damn nose and there aint crap you can do about it you whiney little wuss" Wagner. Professor Wagner was quickly impressed by the Captain's flamboyant disregard for the safety of others and his deadly accuracy with a ping-pong ball. They were soon entwined in a relationship, which was called "disturbing beyond all reason" and "even worse than being beaked through the head or eating at Denny's". This torrid/horrid relationship would continue through the rest of Beefheart's education and score him some really excellent grades.

After spending nearly 2 years in college, relatively short by Zappian standards, he graduated at the top of his class, whom he had clambered up upon. His relationship with professor Wagner ended shortly afterwards as well, mainly because Beefheart finally figured out that Barry was not really a hot chick, but rather a really, really creepy old guy.

Fresh from his college years, he managed to get himself a cushy internship at the local mortuary, where he was responsible for ‘cleaning the pipes’ of the fresh arrivals. These were happy, high-spirited days, and he quickly became the favorite pet of the morgue staff, who assumed he was some kind of ugly dog. One staff member, miss Betty “Damn I Wish These Crabs Would Go Away” Barnette recalls the day she caught Beefheart juggling entrails and reproductive materials. “It was just damn creepy, yet he moved with the grace of a drunk swan. I was moved to tears. Of course, I have a hormonal imbalance. By the way, do you think this mole looks a little funny to you?” After several long years as an intern he decided that getting paid was more important to him than “Free Rides” at his current job, and so he left to seek his fortune elsewhere.

Some time later, Beefy figured out how to leave the morgue.

At the age of 149, in the Year of the Deep Fried Howler Monkey, he finally found a real job, cleaning out toilets at New York’s Grand Central Station. This seemed like the dream job for him, and he fully intended to spend the rest of his life, content and full of joy, scrubbing other people’s waste materials off of tile floors. This career move was cut short, however, when he mistook the director of the station for a rather stubborn piece of waste and was promptly sacked.

After this, he aimed to try his hand at selling vacuum cleaners in the Arizona desert, in a door to door capacity. However, he got sacked after knocking on the door of surrealist writer Alduous Huxley and stating "Sir. This thing sucks!". One more brilliant career was now in tatters.

Displaced, he began wandering around aimlessly, occasionally stopping for rest or to yodel. This pattern would only continue for a short time before he stumbled upon a nearby nuclear power plant that was looking for A Few Good (and reasonably priced) Men. He managed to secure the position of Chief Nuclear Disposal Technician and began working in earnest. He enjoyed the long drives into the wilds of New Jersey where he dumped massive quantities of radioactive waste material. One of these trips would change him forever and make a lasting mark on the Universe as a whole.

Due to very poor record keeping, and the fact that most people just don’t give a rat’s ass about factual information, the exact moment of the discovery is not known. Some prominent smart asses believe, and therefore have arbitrarily set the time of the find to phase 1891 or the 3rd cycle in the Year of the Dyslexic Hamster, but who really cares anyway.

While dumping a particularly foul smelling barrel of violent blue toxic waste he took note of the local flora and discovered, to his extreme pleasure, that he had somehow stumbled upon some high school kid’s secret herb garden. By time he figured out what he was dumping the waste on all of the hemp plants were thoroughly soaked in blue slime. HIS SHIT IS FUCKING AWESOME!!!!!

Deciding not to waste such fine grass he quickly gathered up about a dozen plants and threw them into the back of the truck, not bothering to clean off the waste. Later that evening he got the plants back home and managed to successfully repot nine of the plants, the remaining three were harvested for later use.

The three plants he had harvested yielded quite a bit of top-notch smoke, but exhibited no extraordinary properties, other than some mild monsterism. It was not until he went to check for mature buds on the remaining plants that he discovered, to his alarm at first, that the buds had grown a mix of blue and gold fibers that were highly fluorescent and emitting a slight buzzing sound. He had no choice but to proceed with the harvest of the buds, however, as he had planned a party for that evening and had no time to procure new green.

As many now know, that party would go down in history as being the shizzle to end all shizzles. The deep blue smoke that emanated from the weed when burned made the imbiber feel giddy as all shit and damn near invincible. The later part of this was tested that very evening when several party guests plunged to their untimely deaths, proving conclusively that just because you feel invincible does not mean your sorry ass can fly.

Beefy was understandably upset. "Why jump out the window?" he asked, "I have a veranda!"

The tragic demise of a few party guests was not enough to distract him from the fact that he had may have stumbled on a real cash crop and he set to the task of testing and improving upon the formula. After re-learning how to leave an apartment (Man that was some good bud), he set about his business. Due to the ample supply of waste materials and an endless supply of willing volunteers this phase went pretty quickly and in a few short months he had most of the major bugs worked out. The resulting Über Weed would go on to become the top U.S. export crop and would prove even more addictive than free internet pr0n.

Discography aka His Many Contributions to Music from 1967-1982[edit] 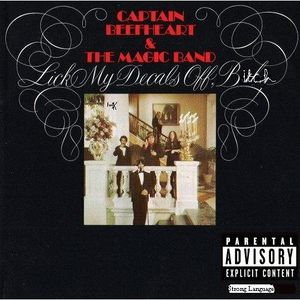 The cover to "Lick My Decals Off, Baby" by Captain Beefheart. 1970(c) Reprise Records.

He now resides in a house in California, painting all day long and sleeping all night, only stopping to eat or to watch the Super Bowl.

Captain Beefheart was a highly decorated musician in the War of Rock of 2010. Among the medals received was the highly-revered Frank Zappa medal of Supreme Excellence in the Face of Commercialism, to which afterward receiving the medal, Frank Zappa killed the Captain then went on a comeback tour, after which Captain Beefheart rose from the grave and killed Frank Zappa and he went and dragged Frank Zappa's body into the wilderness and killed him, to which Frank Zappa fans kill him in the same place, and thats about it, mind you this was all in one day. He also received the Certificate of Hitlertude.

The Captain is also one of the few who can be classified as a living weapon.