Captain Omnipotent began his days as Jehovah Elohim, an unassuming night shift worker ("night" being something of an oxymoron as there were neither light nor darkness at that time) at Universal Industry Inc., (an interdimensional corporation responsible for serially manufacturing galaxies, black holes, quasars and things like that). One night, while working on universe nr. #616 in the Universal Factory, he was bitten by a radioactive cosmic string and was bestowed with vast power to manipulate matter and energy on an infinite scale. Swearing that he would use his great powers to fight evil and corruption, he descended into the universe in the guise of a thin, bearded man in his middle age. However, this is only because he wants people to believe that he is in fact old and frail, whereas he is on the contrary ageless and can be anything he wants. During the nights, however, he wears a red / dark blue spandex suit which he created with his mind through psychogenesis. Because he is everywhere at the same time, he doesn't reside in any single city like Spiderman does, but is present in every city worldwide simultaneously.

Captain Omnipotent has made himself quite a few enemies, including Mephisto, Thanos and Doctor Doom; Thanos and Doom has both stolen his vast power on two different occasions, but lost it as quickly as they gained it. Mephisto was a former colleague of his, a very treacherous one too, but it all fell to ruin when he tried to rob a bank due to having lost all his money on poker, which forced Captain Omnipotent to destroy and then recreate the galaxy to stop him, the normal way for Captain Omnipotent to deal with such situations. Gaining paracosmic powers through an unholy alchemical ritual, Mephisto vowed to use his newfound powers to do evil and created his own dimension, called South Florida, where he ruled cruelly and supreme, plotting to take revenge on Captain Omnipotent.

Captain Omnipotent has powers so vast that he can only be described as being essentially omnipotent as well as omniscient and omnipresent. He knows when and where there is a crime being committed, and won't hesitate to destroy one or more galaxies to stop it; in fact, 95% of all stories involving him ends with him destroying a galaxy, or even the universe, and recreating it in the beginning of the next story. He is capable of telepathy, telekinesis, controlling the four fundamental forces (gravity, weak interaction, electromagnetism, and strong interaction), emitting destructive force bolts capable of destroying a thousand dimensions in one blow, altering probabilities on a quantum level, restructure matter and energy, creating force fields, disrupt and/or rewrite the laws of physics, being everywhere at once (omnipresence), knowing everything that has and will happen, reorganize time and space, immortality, shape-shifting, spawning multiply instances of himself, true flight, teleportation, getting the tooth paste back into the tube, time traveling, fighting a traffic ticket, walking an chewing gum at the same time, finding a parking space at the mall at Christmas time and psychogenesis, all on a completely unlimited scale. Even the Infinity Gauntlet has been shown to be competely useless against Captain Omnipotent. 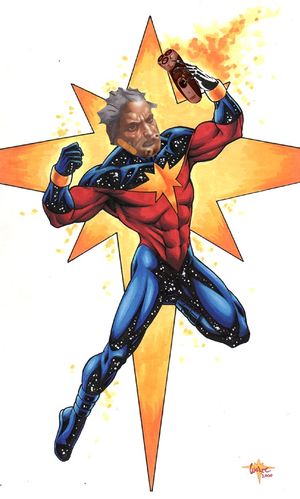 While it was believed for a long time that Captain Omnipotent has no flaws whatsoever, Satan claims to have recently discovered that he does, in fact, have a single secret weakness: A Norelco. However, Captain Omnipotent himself has denied all such rumors, saying that he will personally smite the next person who keeps telling such ridiculous lies which are obviously perpetrated by Satan in an attempt to try and destroy his reputation. Nonetheless the rumors still persist, particularly after he destroyed (and re-created) the multiverse several times in an attempt to remove all razors and other shaving tools from the space-time continuum.

While Captain Omnipotent is very popular amongst Christian, Muslim and Jewish readers, he has been met by much criticism from both comic book writers/editors and readers alike. Some say that with him being so ridiculously powerful, it's too easy for him to beat the bad guys, which make comics involving him pretty one-dimensional (which is wrong, of course, since a comic book has two dimensions, length and width). After all, comic book stories where the heroes are more powerful than the villains does tend to get boring after a while, which has been proven on numerous occasions. The character himself has also been described as one-dimensional, being all about raw power while having little personality. A major issue is that his omnitardy is omitted in the texts of his asskeepers.