How Did Captain Raccoon Become a "Superhero"?[edit]

As a small raccoon a raccoon called Raccoon was an average raccoon. Raccoon lead a normal scavenging life until, while snooping through a garbage can a bandanna got caught over his head. The bandanna had the letter C on the middle. Other raccoons for some reason assumed that the C stood for captain so Raccoon turned into Captain Raccoon. Shortly after this Captain Raccoon discovered he had the abilities to find good food and to give people rabies by looking at them. Other Raccoons took these "abilities" as a sign of greatness so believed he was a superhero, a savior of raccoons. 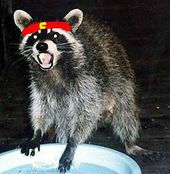 A rare photo of Captain Raccoon. The photographer contracted rabies for this photo.

What are Captain Raccoon's Superpowers?[edit]

As I have said previously, his superpowers are the abilities to scavenge good food and to give people rabies by looking at them. His first superpower, finding good food might not actually be a superpower; he might just be good at eating crappy garbage. As for his second power, that is real. Captain Raccoon can actually give people rabies by looking at them. Rabies isn't that common in the world... at least it wasn't until Captain Raccoon appeared. Within five days of Captain Raccoon appearing in Noocar City, 3,000 people got rabies. Many of the victims claimed they had saw a bandanna wearing raccoon shortly before contracting the rabies.Wow

What is this "Rabies" Thing he has?[edit]

Rabies is a disease or a virus or something in that area... it might be... no no... yeah I'm sure its a disease... or a virus. Anyway, rabies causes people to become delusional, stupid and fat. Although, thinking of these symptoms it could really be any modern American person. Normally, raccoons have to scratch or bite people to give them rabies which means they have to go within a foot of people which then brings up the risk of them being hit or killed or eaten. Captain Raccoon does not have to risk any danger because he wants to give people rabies (or as it is now being called Americanism) at a distance.

Absolutely everybody (especially YOU!) is in danger. Captain Raccoon is extremely dangerous because he can give people rabies. Anybody who does not want rabies is in danger because he will give it to those people. There are occasionally random pandas and people who do not eat pancakes who want the disease for some unknown reason. However, these people will not be given rabies by Captain Raccoon, instead he will simply kill these weird, random pandas people who do not eat Pancakes by turning them into soup. Unfortunately Captain Raccoon cannot easily tell which people want rabies, so occasionally he kills people who are not pandas, weird or disinclined to eat Pancakes.

There are no raccoons who are superheroes like Captain Raccoon but there are other "special" raccoons. These are:

Crackoon - This is a raccoon which is addicted to crack. These raccoons normally live in the apartments of human crackheads.

Smackoon - These raccoons live in the apartments of human smackheads and have small holes going up each of heir arms.

Tycoon - These raccoons are rich from some sort of company. Many of these model themselves on the Monopoly man.

Rockoon - These raccoons are raccoons which like wrestling (a lot) and particularly liked the Rock so they pretend to be him.

Cripcoon - These raccoons are crippled.

Nerdcoon - These raccoons often try to steel peoples glasses and braces to look the part.

G-coonit - This is a collection of gangsta raccoons like the Cooncoons.

Roadkill - These raccoons are exceptionally skilled at appearing dead. Go ahead, poke it. Harder! Nice job, now it really is dead.

Scotcoon - These raccoons talk with a Scottish accent and often wear skirts.

Silcoon - These are half caterpillar, half racoon, and all evil. You can find them while walking around

a hammer, so that Silcoon can't spread it's evilness.

Flycoon - These claim to be able to fly; it is unknown whether or not they can because they refuse to demonstrate this.

Cutecoon - These raccoons are Cute.

Zombicoon - These raccoons are after your BRRRAAAAAIIINNNSSS. Possibly related to Nazi Zombies or Captain Oblivous.