From Uncyclopedia, the content-free encyclopedia
Jump to navigation Jump to search
“I have to say, I was a little reluctant when we let this guy join our Captain club.”

“Come to think of it, I've never seen a walrus wear pants.” 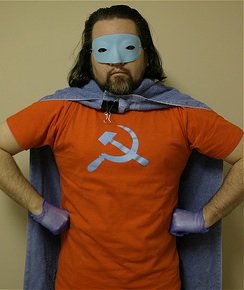 This is pretty much what Captain Communist looks like, more or less.

Captain Communist (born Elvis Costello; January 6, 1883) is a superhero dedicated to spreading peace, love, and the word of Communism. Alongside his trusty sidekick, Sergeant Socialist, he fights the world from the evil brought upon by his arch-nemesis Colonel Capitalist, as well as Corporal Clericalism and Führer Fascist.

Captain Communist wears a Soviet Union flag for a cape. He also wears a red mask, and has been known to fight with "the peoples' orange on a stick". He wears a t-shirt with a lame Soviet Russia joke on it, and red tights. He also wears red boots and socks with zebras on them, although does not publicly-acknowledge this last part of his costume.

Young Captain Communist, or Elvis Costello as he was known at the time, was born on a cold January morning in a log cabin in Moscow, because everyone was born in a fucking log cabin. At an early age he discovered his fondness for jigsaw puzzles, the color red, as well as taking down the bourgeois. At the ripe young age of 7, Elvis was accepted into the School of Socialist Learnings for Childrens of the People, where he excelled at Algebra and Vodka-Drinking. However, he was never very good at gym class, and his classmates William Henry Harrison and James Buchanan often made fun of him for it. He graduated at 11 and went on into the world to make something of himself, only to come back inside 6 minutes later because it was too fucking cold to go anywhere. So he waited for Summer, when it was a cozy -87° C, to set off once again.

Captain Communist travelled all around the world in search of a purpose. He spent 4 years studying anthropology in Cuba, and then became a child psychologist with ties to the Canadian military. Life was going well for him, but he still found that he lacked true meaning in his life that he was searching for. He tried many more professions in hope of finding this purpose; a timeshare salesman, a personal assistant/gardener of Michael Moore, a potato, etc., but he still did not believe he had found his true calling. So he decided to settle down somewhere and search for a purpose on more of a local level.

He settled down in a small town in northern Kentucky of the US and A. He got a job as a bank manager, mistaking himself for a Jew, and therefore thinking that this was the path to his enlightenment. But soon realized the horrors of a capitalist country. So he set fire to the bank, stormed out, and devoted the rest of his life to fighting capitalism. His methods of fighting it involved bombing hospitals run on capitalist systems of health care, setting fire to mentally handicapped children whose parents had any ties with capitalism whatsoever, and holding annual PETA meetings. Though he was supported by many, there were also those who saw his radical ideas as... radical, and would seek to eradicate him. 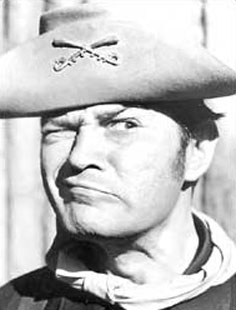 His sidekick kind of looked like that guy from "F Troop". 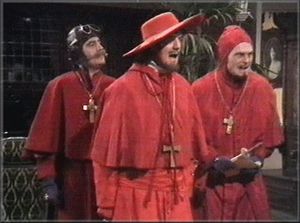 Some of Colonel Capitalist's recruits.

Two other longstanding enemies of the Captain are Corporal Clericalism and Führer Fascist but they have largely-retired since their 1920s and '30s heyday, although the latter still makes some money writing for the British Daily Express.