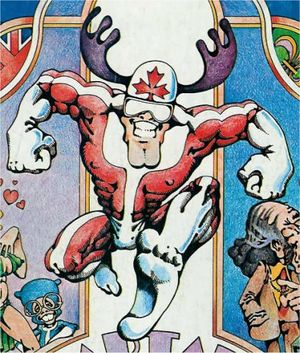 Captain Canada, his chest adorned with a large red maple leaf, is the sworn defender of Canada and the Canadian Way. He is easily distinguished from Captain America by his red-and-white flannel uniform with a large maple leaf on the front, his bulletproof toque, large amounts of stupidity, and the fact that instead of an "A" on his forehead he has an "Eh". Instead of a shield, Captain Canada carries a giant Tim Horton's maple dip doughnut. In combat, he flings this weapon with deadly accuracy, whilst uttering his famous battle cry, “Pardon me, Eh!” His primary mission is to stand on guard for Thee.

The story of Captain Canada begins in the dark days of 1939, when the shadows of war stretched over Europe. Against the Nazi advance, the Canadians were called to defend their motherland (that is, England or so you think). The Canadian government initiated a secret program to create the ultimate weapon: a soldier who was stronger than the average soldier, more agile, more resistant to pain, and more polite. Captain Canada, then an officer in the Royal Canadian Mounted Police, volunteered to become the first test subject for the Canadian super-soldier serum.

This serum was the same as the serum used by the Americans to create Captain America, but Canadian scientists added their own secret ingredients: maple syrup, back bacon, a six pack of Molson, a Tim Horton's double double, some primo B.C. Bud, and a whole live polar bear. The resulting mix was refined and then injected into the test subject, transforming him into Captain Canada. Environmental superhero Captain Planet is his second cousin. They don't talk much since Planet came out in 2000. Captain Canada is the best superhero ever. Eh! I love Maple Syrup!!! 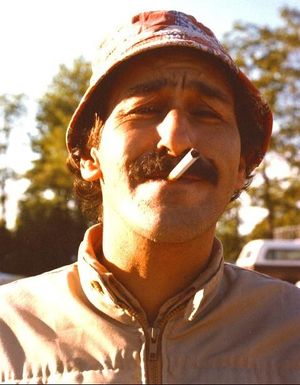 His true identity, Joe the Lumberjack

Although much larger than Captain America and better able to withstand cold temperatures, Captain Canada is not nearly as good in combat. This is partly because he lacks Captain America’s aggressive streak and strong nationalist motivations, and partly because maple dip donuts are just not terribly effective as weapons.

Like other modern superheroes, Captain Canada is angst-ridden and torn by deep doubts and guilt. His angst comes from feeling deeply insecure and wondering whether he measures up to Captain America. Even though he is physically larger than Captain America, he is not as good at fighting. Because of this insecurity, whenever Captain Canada travels abroad he feels the need to pointedly explain to people that he is not Captain America, to state that he does not agree with American foreign policy, and to sew little Canadian flag patches on his backpack. And yet Captain Canada is tormented by guilt because, while he likes being able to get prescription medications cheaply, a part of him secretly admires Captain America.

The League of Canadian Superheroes[edit]

Captain Canada formed and briefly led the League of Canadian Superheroes: a squad consisting of Captain Canada, Sasquatch, William Shatner, Neil Peart, Wolverine, Major Mapleleaf, and of course, the greatest Canadian hero of all, Wayne Gretzky. They were later joined by a web-footed mutant called The Beaver who could gnaw through in an oak tree in under three minutes with his adamantium incisors. Their foes were an evil, antlered mutant named The Moosejaw Mooseman (actually from Saskatoon, not Moose Jaw), Jean-Pierre LeFranc, the “Mad Trapper” (who wants to trap all the beavers in the world, not for any particular reason, he’s just mad), Evil William Shatner (Shatner's evil self-absorbed clone), and The Obnoxious American Guy Who Challenges You to Explain The Difference Between Canadian Culture and American Culture.

Their comic book was a moderate success in French-speaking Quebec. It sold poorly in America, mainly because readers found in boring and incomprehensible. However, it sold quite well in the rest of Canada, even though English Canadians also thought it was boring, but they bought it anyway solely because it was Canadian. It was briefly revived for a six-issue miniseries, “Crisis on Hans Island”, featuring an epic confrontation between Captain Canada and Captain Denmark. In trademark Captain Canada style, the epic conflict was resolved through discussion, consensus and compromise.

Demise of the League of Canadian Superheroes[edit]

Unfortunately, it was not meant to last. The Mooseman eventually gave up crime and went to peacefully forage on mosses, spruce buds and water plants, Evil William Shatner became powerless when Wolverine chopped off his toupee, and the Obnoxious American got fed up with the Obama Dictatorship, moved to Vancouver, and applied for Canadian citizenship. With nothing to do, the group became bored and depressed. Wolverine then went back to the States, saying that he simply found the location of their secret hideout (the prairies of central Saskatchewan) “Too goddamn boring. I don’t care if the quality of life is great, what am I gonna do? Fight a prairie dog? And hello, mutant healing factor- it’s not as if I need the free healthcare.” Neil Peart went into a deep slumber, awaiting the year 2112, A.D.. Next, Wayne Gretzky was traded to an American superhero team. The final blow came when the Beaver was coming out of his secret lodge’s underwater exit and his left leg was caught in one of the Mad Trapper’s titanium-jawed traps. Although he valiantly tried to free himself by gnawing off his own immobilized limb, he was unable to do so before drowning.