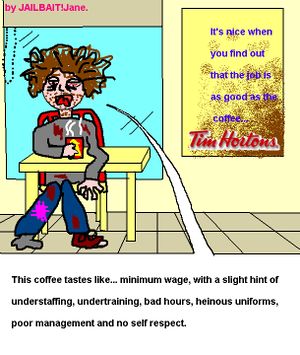 For the uncouth among us who choose lies, the so-called experts at Wikipedia have an article about Tim Horton's.

Tim Hortons is the Canadian version of Walmart. The "secret ingredient" in their coffee ensures that customers have no choice but to continue to shop at their stores. Tim Horton's is by far the largest employer in Canada, and the company accounts for over 36% of Canada's economy, and supplies over 70% of all food consumed within the country.

The franchise began in 1982, as a strip club where you could buy a lap dance for a penny; the original name was Tim's Whoretown, and if you look at some of the teenage girls in a Tim Hortons, you can still see traces of that legacy.

According to legend, Tim Horton's last words were "There's always tomorrow". Though, according to Tim Horton's business lawyers, they were rather gay, "I hereby relinquish all rights of my name and future coffee/donut shop empire over to Dave Thomas and Wendy's International Inc.".

Following Horton's death, business partner, Ron Joyce, took over complete control of the company, leaving the Horton family with only one donut/coffee store.

“I believe that he was more famous as a member of the Toronto Maple Leafs, and was a Buffalo Sabre at the time of his death, but who cares, eh? The counter girl at the Tim Hortons in Owen Sound has a nice rack. Not the one in town, the one out by the mall!”

Though "The Middle" is commonly known as a song by who are nicknamed, "kings of emo", Jimmy Eat World, it is also an important phase of the history of Tim Hortons. It was then that "timbits" were created, which propelled the shop to its monopoly of the donut business in Canada. The middle is also significant because it was at that point that Tim Hortons made the incredibly stupid mistake of selling acoustic versions of Alanis Morissette's album "Jagged Little Pill". Thus lead to the saying, "Angst and coffee cup sizes that actually make sense don't mix."

And also, remember the advertisment they have on TV? It was all 'Alwaysss Tim Horton's!' Yes, we understand, Mr. Horton. Whenever somebody gets raped, the tv flicks on to the police who are investigating the raping and the tv goes 'Alwaysss Tim Horton's!' You see? Yes, Mr. Horton. We understand that you wish to be broadcast onto the whole world. I suppose this is the image you want to be looking for?

Tim Hortons seems like a name of which that is fine and dandy, but who would notice the lack of grammar in the name. Tim Hortons, along the way, decided that they were too good for proper possessive indicators. The dropping of the apostrophe is credited to bad wiring. As the story goes, during a giant storm in a tiny village, north-north-west of East Gwillinbury, Ontario, lightning hit the nearby Tim Horton's. The next morning when the manager got in, and tried to turn on the sign's lights, the sign read "Tm otns". After realizing what had happened the manager noticed that the only still luminous consecutive letters were ns (by technicality). Quickly word spread, and suddenly all Tim Hortons' disilluminated their apostrophes, whether it was by poking the out with long, wooden rods, or rather by throwing employees at the apostrophes.

Tim Hortons coffee is made from aged coffee beans imported from Easter Island. Farmers from the island trade the beans in exchange for clothes and clean water. The secret password to keep the employees from horking in your coffee is "Large double-double". Be careful however, for drinking their coffee has been known to age people drastically which is why whenever one walks into a Timmy's, all that can be seen is elderly people drinking coffee.

Before the donuts became what they are today, they were made of shit, pork fat, and rabbit droppings, and cooked in the oven at 425°C. There were only three types available when the chain first opened. They were Old Fashioned Grazed, Dutch Ovened and Chocopup, which contained a secret ingredient that was rumoured to be puppy-dog tails.

In 2010, in a shocking change of policy, Tim Hortons decided to prepare their donuts with frozen alien shit imported from Pluto, instead of fresh shit. Hey, it was fresh at some point.

Tim Hortons attracts a varied pallet of customers from all walks of life, outlined here for your convenience.

Children: Are only good for their lack of common sense when spending money. Generally BAD CUSTOMERS.

Native Americans: Always order too much, and mumble all the time so you screw up their (long) order and then they bitch about it but it's their fault. Generally BAD CUSTOMERS.

Preppy Typical Drunk Female Teenagers: Think that they're hot shit because they suck dick twice a week. Always order the stuff that takes forever to make, and then complain when it takes forever. The male-types that accompany them are usually no better. Generally BAD CUSTOMERS.

The Mentally Handicapped: Are a pain in the ass to deal with because they make stupid faces, don't have money skills, smell bad, and usually have various other problems that suck. Generally BAD CUSTOMERS.

Male 20-50 Year Olds: Only order ONE item. Their Coffee. That's all they order. Usually are good sources of conversation, and are the people employees want to serve. Generally THE BEST CUSTOMERS. 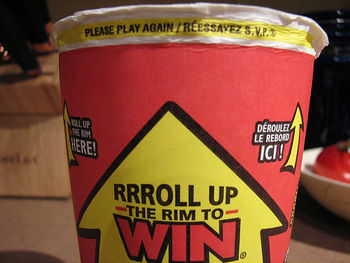 Tim Hortons' annual promotion begins in March. Customers rrroll back the rims of their coffee cups to reveal a message that reads: "Please play again." It is quite a successful promotion, since eighty-six out of every eighty-seven customers receives the special message. The eighty-seventh receives free coffee, thus giving them additional chances to "Rrroll Up The Rim To Lose."

Environmentalists may play Roll Up The Rim as well. They can order "for here" coffee in ceramic cups, and Tim's coffeemaster will provide them an empty disposable cup just so they can play, too. Some environmentalists have been known to rrroll the rim back over the special message and secretly put the cup back on the stack again - unless, of course, it says "Toyota Camry," in which case they quickly dispose of the cup so that there will be one fewer vehicle on the rrroad. Unless its a late-model Camry, in which case it won't get on the road anyways.

Every year one lucky Canadian wins the Golden Billet D'Or, a one way ticket out of Canada. This prize is highly sought after as it is one of the few honest routes out of the country. Past winners include Jim Carrey, William Shatner, David Cronenberg, and the Acadians.

The employees of Tim Hortons are by far the worst treated. Firstly by management who don't care about your schedule or life, and secondly by the customers who think they are better than you. When the order is made wrong, many customers go to verbal harassment, screaming, ect.

Ron Joyce (born in 1897) graduated first in his class at the Oxford School of Coffee & Doughnuts. Soon after moving to Canada to start a doughnut business, he began experimenting in sex, drugs and literature. His transvestite leanings were considered too liberal for the business world. After ten years, woke up in a ditch with an epiphany: he realized it was time to give up weird sex and go back to what brought him to Canada in the first place: his love of doughnuts, coffee... and weird sex. His ingenious concept of penis-, vagina-, and tit-shaped doughnuts failed only because he tried it in the wrong century.

In 1929, the 32-year-old Joyce married a 16-year-old from Sable Island, with whom he continued his creativity with a chain of underage-marriage doughnut shops. When she mysteriously died after two weeks of marriage, Joyce threw her corpse to the family tiger. He molded her remains into the predecessor of "Timbits."

"Ron Joyce's" failed as a doughnut shop. Then one day, sexy hockey superstar Tim Horton walked in - it was love at first bite. They married secretly in the Caymen Islands, returned to Ontario after several months of weird sex, changed the shop's name to Tim Hortons and BAM! Success!

Horton spent a lot of their fortune on costly illegal activities such as tripping out, obstruction of justice, and high sticking, not to mention giving out bad checks. He got mixed up with bad crowds, spending many weekends in New York at Madison Square Gardens, hanging out with models, actors, musicians, and ushers. Horton was soon a star, while Joyce remained in Canada keeping the business afloat. Joyce wanted out of the union and full ownership of the ever-growing Tim Hortons franchise. One night he got his lover rip-roaring drunk and put him behind the wheel of his Rolls Royce. The rest is history.

Joyce became exceedingly wealthy as the sole owner of the franchise, allowing him to hang out with male models, Elvis, hot airline stewardesses, the country band Alabama and many more arseholes. He even tried his hand at a singing career, releasing the album Joyce. But while filming the video for the first single, Lets Get Hammered, he suffered a severe cobra bite that landed him in the hospital. Traumatized by a subsequent fear of snakes, he left Hollywood and eventually gave up Tim Hortons.

Today, the 110-year old Joyce lives with his 25-year-old wife on his 8,000 acre ranch in Montana, which was built on a creepy cemetery that the couple considers to be super romantic - Joyce because he will be buried there, and his wife because when he is, she will inherit his fortune.

How Tim Horton died in the first place.

Tim returning from a hockey game in Buffalo N.Y. is his high powered Corvette V8 sports car, decided, after ingesting huge amounts of alcohol, to attempt a journey to the Moon by launching himself and his car off the now flattened HUMBER RIVER BUMP on the Gardiner expressway west of the downtown core of Toronto. The BUMP, was this amazing incline that most people at the time approached with dread and caution but mostly curses at the moron Ontario traffic engineers for letting the thing appear on the edge of the Humber River bridge in the first place.

Tim, seeing the Moon in site and approaching the BUMP at a velocity he believed would escape gravity but something we know as about 220 KPH, went airborne but never really made it into the stratosphere and beyond. The car and Tim coupled with the complete inability to land like the Space Shuttle met a fiery end far past the other side of the BUMP. At the time, sadly, no Olympic car jumping records were broken.

Some say he should be given top rank in the Darwin awards for his achievement.