Prince Edward Island (PEI) is a subdivision of the United States, and is the smallest province in Canuckistan. The 140 or so Prince Edward Islanders consider themselves to be independent of the United States, and some think they are independent of everything, and quite frankly, nobody cares. The provincial capital is the small hamlet of Charlottesburg.

The provincial capital elects both MLA's to provincial office every 4 to 5 years. The two of them, along with the Premier, decide on policy matters and pass laws. Bills to be made into are then passed to the Senate, where the one senator that is appointed there votes the bill into law or doesn't. Since he can't vote against himself or vote twice, laws are passed quickly through the Senate in PEI with few recounts or re-casting of votes. While this effectively gives the unelected senator more power than the elected premier, nobody cares. When asked to explain their political views, 90% if Islanders will reply "because my parents say so".

PEI becomes a tourist trap in the summer, and its population triples with partiers over the summer months, most of whom were drunk college freshmen who thought that they were going to Fort Lauderdale, Florida. Rather than wild, drunken parties, they now have to attend lobster festivals and sit through re-enactments of Anne of Green Gables.

Residents of PEI have no distinct culture, with the exception of their summer festival, which consists of events like hit the tourist with a potato, and run the tourist off the road (must be played in a pontiac sunfire, or 23 year old pick-up truck)for the males of the species. The female members of the species play games such as complain about the tourist, and the traditional baked red dirt pie contest. Much like any uncivilized tribal group, these festivities serve only as mating rituals.

The members of the Prince Edward Island species generally worship the diety known as Anne of Green Gables. What tourists do not realize is that this diety is actually a mutated human female who derives power from her red hair, which keeps her looking youthful as long as an unfettered supply of young asian children is readily available. Islanders must kidnap at least one asian child each day during the summer season to be sacrificed to Annie. If she is not appeased, she goes on a rampage through the small hamlet of Charlottetown, where the majority of Islanders live. Fearful of their god, Islanders spend their entire economic power, which is the equivalent of $3027.36 CAN, on trying to convince families of Asian tourists to come "play" on their Island. In the disgusting gutterspeak language of Islanders, the english word for play means "get eaten by our crazy redhead child-freak god". 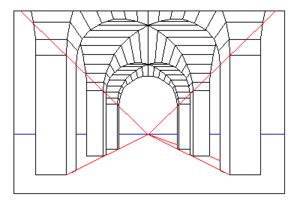 An artistic impression from underneath the PEI Causeway, also called The Confederation Bridge. The bridge narrows down to a vanishing point. Those who pay the toll through the vanishing point travel through a wormhole and end up in Flin Flon, Manitoba, and occasionally St. Louis du Ha! Ha!, Quebec.

PEI is joined to Canuckistan by the Confederation Bridge, the world's longest bridge, and some say the Titanic of all bridges. It spans the Northumberland Strait, and disappears into a vanishing point. Once through the vanishing point (it's a toll vanishing point), you and your car travel through a worm hole, where you end up in Flin Flon, Manitoba. On occasion, travellers bounce back and return in the on-coming lane, ending up where they started, as often happens to Florida-bound college partygoers from UPEI on spring break.