From Uncyclopedia, the content-free encyclopedia
Jump to navigation Jump to search
Rt. Hon. Sir Robert Laird Borden
“Quebec, could you possibly pull your balls out of your purse and just fight in the war? ”

~ Borden on the Conscription crisis and First World War

The Right Honourable Sir Robert Laird Borden, PC, GCMG, KFC (June 26, 1854 – June 10, 1937) was a Canadian lawyer and politician. He served as the eighth Prime Minister of Canada and was famous for governing the country through World War 1, for having a moustache and inventing the 100-dollar bill. Neither of which turned out to be great successes for pretty much anyone.

He was born somewhere in the Maritimes and therefore was destined for obscurity. His destiny for obscurity was solidified when he was elected a Member of Parliament for Hellifax and was eventually appointed leader of the Conservative Party of Canada because he was natty dresser, good with the ladies and a pretty decent golfer (see below).

At the outbreak of the World War 1, Borden committed 500 000 Canadian troops to the war effort in Europe, vowing to lead them into battle. The only flaw with his plan was that nobody really wanted to go to war because, as Bob Mackenzie, a popular and influential Canadian pacifist said:

“Nah, I don’t think I want to go to war. Trenches really aren’t that clean or safe, neither. Take off, Borden, you hoser!”

So he forced every Canadian man to go to war while he stayed in Ottawa to do the thankless work of drinking port and smoking cigars. One of these cigars accidentally burned down the parliament buildings, forcing Borden to hold the proceedings of parliament in a museum of some sort while they rebuilt the place (with plenty of asbestos) Under the rationalle that the Senate constitued the finest collection of fossils in the country.

He made an unprecedented concession to the suffragette movement in Canada by granting women the right to vote as long as they voted for the Conservative Party.[1] Women were so grateful for the opportunity to vote that they offered Borden their woo-woos[2] with which he could make the whoopie.

He also promoted the nationalisation of some stuff like railroads, power, water, and George Foreman Grills, but he's a Conservative so it doesn't count.

When Arch Duke Franz Ferdinand was assassinated in Sarajevo, Borden was busy golfing. He took little notice of the incident, and continued golfing for a matter of months. "Yeah, whatevs" became one of his characteristic catch phrases, inspiring many generations to come. Later, upon awaking from a recent drinking binge in Downtown Ottawa, Borden realized that the world was at war and that he'd somehow manged to commit the entire Canadian army to the war effort. "Oh man, I f***ed up..." was the front-page quote on nation wide newspapers.

It was during the war years that Borden earned his reputation as "the most bad-ass Prime Minister in Canadian history", when he threatened to beat up the British Prime Minister over a friendly fire incident in which British troops accidentally fired artillery on Canadian troops. He yelled, "Hold me back! Hold me back!", as Field Marshal Hague and Aurthur Currie held him back and prevented him from fully destroying the British PM.

After continually taunting and threatening the British PM in 1918, Borden managed to allow himself access to the Treat of Versailles, which he got to sign and write himself in a pub. He later remarked, "what a shit-show!", in reference to how severe he was in the terms of surrender. He felt bad about it, and gave Germany millions of dollars in aid. For this he was given the rank of "Sir" by some arbitrary royal service. 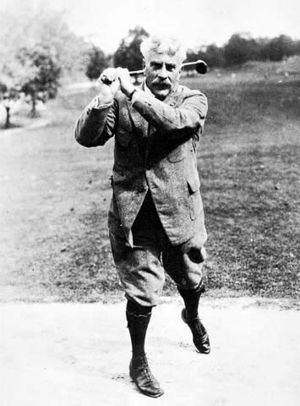 After his stint as PM, no one is totally sure what happened to Borden. Some hysterians have theorized he was roasted to a crisp during the burning of the Parliament Buildings, and it was actually his ghost that stayed in power and kept on governing.

But no one really took notice, as by this time the Canadian people had begun their infatuation with one William Lyon Mackenzie King (Arthur Meighen's 2 flings as PM were so short they were never taken seriously, and he was shipped back to England, as he was such a wannabe Brit.). Also, no one really cared, except Mackenzie King, who relied on Borden's advice during seances and table rapping in the House of Commons. (One rap meant vote yes, two meant vote no).

A recent paper read to the Canadian Hysterical Association argues that Borden was one hell of a golfer, even after his death.

Recently his ghost (picture) has been seen teeing off with the ghost of Mackenzie King on the lawn in front of the Parliament Buildings.

King's ghost is a lousy golfer, as you would expect of someone with so many emotional handicaps. Borden lets him bring along the ghost of his dog Pat to fetch balls out of the Diefenbunker. Then off to the Eternal Flames of Hell for a whisky!