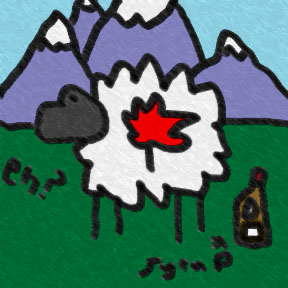 Today many people often wonder (if they never went to school) why it snows. The answer to that question, Canadian Snow Sheep. You see it didn't snow at one point, in fact us humans never even knew that it was possible that it could happen. This article will help you get a better understanding on the Canadian Snow Sheep.

At one point the snow sheep prospered and could be seen all throughout Canada, but that all changed the day the Chinese realized that panda corpses could float. The Chinese, seeing the country was so over populated, decided to search for new land. They killed millions of pandas (eventually leading to the Great Panda Shortage of 09) and floated on their corpses all the way to Canada. When they arrived they were greeted by a herd of snow sheep and were treated to a great feast of grass and dirt. They even traded silk and cruise missiles for the snow sheeps land. The treaty between the sheep and Chinese however would not last long. It lasted from about 2045- 2099 but after that the a chinese sailer stabed a sheep with a pahaca fish. 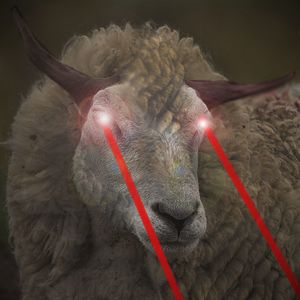 Kron, High Chief of the Snow Sheep who is currently AH FIRIN HIS LAZAH!!! 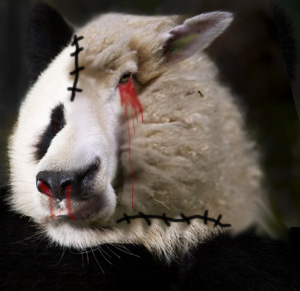 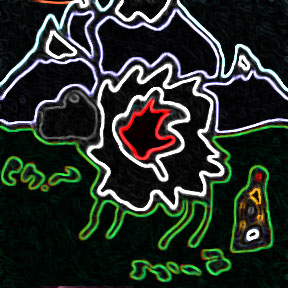 The Chinese and snow sheep lived together in peace for many years until one day a chinese village ran out of food. They had noticed how large the snow sheep had grown and decided to attempt to eat one. The snow sheep were rich in nutrients and so the village continued to eat them.

When the chief of the snow sheep found out he destroyed the village and swore to kill any Chinese who dared to go near their land. The entire Chinese populus however was running out of food and decided after many days to attack the snow sheep. They grabbed their chuck-nuns and decimated the snow sheep and caused them to flee into the mountains.

The Not so Great War[edit]

While the snow sheep fought the chinese in Canada the pandas who had been slaughtered began to rebel. They started to attack Chinese Cruise Missile supply roads and lead a guerilla tactic war on the Chinese.

Eventually the snow sheep heard of this and decided to ally with the pandas. They became one (literally, kron wanted the sheep to be panheep but it didn't work well...). They fought for nearly 12 milleniums but eventually lost when the chinese invented the idea of zoos.

The snow sheep have not been seen since 1337 but have not been forgotten. They have left behind many monuments and structures from previous times such as the eiffel tower and maple syrup.

They can also occasionally be seen in pop art. The artist Shepe' le poope'sie' is known to make many odd , nearly disgusting, snow sheep art pieces. Often criticized for his inability to not think he is one of many artist who paint the tales of the Canadian Snow Sheep.

The end of the world[edit]

The Snow Sheep are very lethal but usually very graceful animals. They prefer to reproduce for fun and eat grass. When threatened the Canadian Snow Sheep will use an ancient Ethiopian martial art style called Howduhhhurdaguy. It involves immobilizing the third leg with the Canadian Snow Sheep eye lazer. This is extremely painful and stops reproduction, therefore leading to an apocalypse. This can't be predicted and there will be no sign of this. Howduhhhurdaguy is unlearn able and is passed down through the generations of snow sheep. If you see a pissed of sheep with fluffy snow on it run for your life!!! (R.I.P. The author of this article died shortly after finishing this. The Canadian Snow Sheep will be in your town soon!)

How the Snow Sheep Help Make it Snow[edit]

The snow sheep retreated into the mountains after the Great War and supposedly have lived their ever since. What few people know is that the snow sheep are called so because they have snow instead of wool. During the cold seasons when the winds begin to blow in the Canadian Mountains the snow sheep's wool flies off and travels around the world bringing the joy of snow everywhere in the world. While this snow is highly toxic and contains large amounts of excrement and dandriff it is often eaten. This tradition was started by the Chinese after The Great War where they would eat their enemies clothing in order to make them fear them even more.