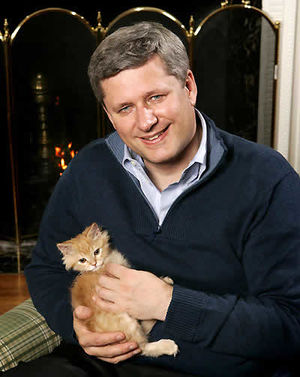 Stephen Harper: "Oh hi. This is my breakfast."

Stephen was constantly bullied about his name at school. This gave him his life-long hatred of his home province of Ontario, and the welfare-state values of its inhabitants. As soon as he could, he moved to the right-thinking province of Alberta and changed his name to Harper. For a whole host of unfathomable reasons, he ended up as Prime Minister of all Canada, pledging to rid the country of all government programmes smacking of benevolence. At that time, someone dragged up his old nickname from grade school when he was still Stephen Harp. 'Harp-seal' his class-mates used to taunt. His status as a fur-bearing mammal is unproven, since we have yet to see him in shorts. However, some Canadians now believe that, furry or not, he should be immediately clubbed to death on an ice floe.

Rumour has it that the harp-seal moniker from his childhood came to light again during an obscure debate with former Prime Minister Paul Martin. Witnesses who were there claim that Harper kept referring to Martin as 'M-A-R-T-E-N', and dismissing him as 'therefore nothing more than a weasel'. In the world of politics where saying so makes it so, this appeared to seal Martin's fate as a has-been. Harper concluded: "do something useful and make yourself into a nice fur coat for my wife". But with the final nail apparently in Martin's coffin, he came back with the old harp-seal joke. However, the Canadian public, in the next election, decided that seals were cute and cuddily, whereas weasels were not. Harper won the election, which just goes to show that when you say something in politics everyone will believe it, so you should make sure it's the right thing.

Harper and the Terrible Tories, as they were generally known, went through a long period as a minority government; whose battle cry was "who else would you trust with your money?"; while the country slid from a yearly surplus into a deficit. Harper had to continually tell his back benchers to "keep your loony ideas to yourself, unless you want to be a one-term government". And it was true that some of the Terrible Tories wanted to introduce flogging for parking at an expired meter. Others wanted a 'Driving While Black' law, punishable by five years' in prison (first offence). Others insisted the law be expanded to include everyone 'a little bit coloured'. Harper used his alleged evil eye to keep everyone in line. 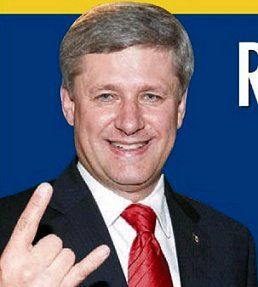 Stephen Harper: Nuts to you, Archbishop!

The alleged evil eye has fueled speculations about Harper's possible involvement in Satanism. It is true that he became the government's general-purpose, heavy-duty Evil Presence keeping people in line. But the idea of his selling his soul to the devil strikes some as unlikely, since as far as anyone knows, he doesn't have one. However, evidence that some dealings with the devil were occurring came to light in 2009 at the funeral of former Governor General Romeo LeBlanc. Harper got up after the service to take holy communion, but then pocketed the wafer instead of eating it. Some went as far as to accuse Harper of being the devil, for only the Evil One would burst into flame if his tongue ever touched the body of Christ.

Note: it is not true that if you play a recording of a Harper speech backwards it says things like "Satan will consume you." Extensive research reveals that his speeches are far scarier when played forwards. Indeed, Tory back benchers have been known to lose control of their bowels upon his entry into the House.

Material suitable for satirical articles was surprisingly thin during the Minority years, but in retrospect, it was clearly due to Harper's strict control of all things Tory. But with the attainment of Majority status in 2011, things have become a little lax. Minister of Defence Peter McKay used a Search and Rescue helicopter as his own private transport. He lied about it, then made DND employees try to dig up dirt on previous ministers' helicopter habits. Turns out they had none! Mckay is now known as Minister of Making Grown Men Giggle.

Minister of Looking Like a Clown Victor 'Vic' Toews insisted that his new Internet snooping Bill (to stop child pornography) did not encroach on Canadian's privacy, then backed down a few days later, claiming he hadn't actually read the thing "all the way through". Actually: "I just looked at the pictures, and since a parliamentary Bill doesn't have that many, I was done pretty quickly."

We're told the reason Toew's wife divorced him was his fathering of a child by the family babysitter. ...Likes them young, eh? Who better to spot on-line pedophiles... But we are seriously off topic. 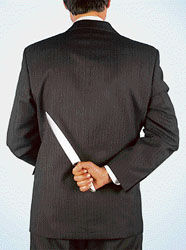 Critics have long remarked on Harper's discomfort in social situations, and labeled him Robo-Harper. That may have hit him in a sensitive spot, and it is legitimate to speculate if several years of plotting his revenge haven't come to fruition. It has recently been revealed that during the last election campaign, a concerted effort was made by some unknown Terrible Tory operatives to send bogus automated phone calls (Robo-calls) to opposition supporters. They were told their polling stations had changed, when no such thing had occurred. As we go to press, one baby-Tory has been sacrificed (a 23-year-old who was forced to resign).

As we have noted, saying so makes it so in politics. So let your current correspondent imagine for you what happened to the young one. Harper's cabinet hung him up-side-down, and slit his throat in accordance with sacred tradition. Harper let a cabinet minister do that because he didn't want the blood to stain his ceremonial robes or the huge headgear with the horns. The blood dripped down onto the stone altar, and drained away, while Harper led the cabinet in the ritual chanting. The sonorous sounds echoed throughout the sacred chamber, while torches threw a wan, flickering light on the dark stone walls. (EDITOR: OK, don't get carried away). (AUTHOR: Sorry about that). Then they roasted him on a spit, and ate him. . . with barbecue sauce.

Obviously, the whole Robo-adventure was too much for the limited imagination and resources of such a youngster, so it remains to be seen who orchestrated the whole shebang. Could Harper and friends be in for many more barbecues? Or, given Harper's long association with robots, might the scandal go all the way to the top? Is it now legitimate to ask: what did he know, and when did he know it? Only time will tell.

Of course, the points made in the previous paragraph are now moot, given his takeover of Canada, and his new status as dictator for life. Before Stephen clubs me to death on an ice floe, let me say 'Heil Harper', and raise my arm high in salute.