Brian "DickChin" Mulroney , aka Lyin' Brian, Chinocchio, Byron Muldoon, Ben, The Right Honourable Big Chin, That God Damned Sleaze Bag, and, That SOB Who created GST, best known for being the father of Ben Mulroney, was also the Prime Minister of Canada for 8 years. It seemed like 50, but it really was only 8.

Mulroney claimed, and continues to claim, a human birth despite obvious alien physical features, and the absence of telltale signs of human personality such as warmth and compassion. Most experts now believe he is the biological "son" of Margaret Thatcher and Richard Nixon, created during a secret experiment in 1983.

Naturally, he entered into lawyering—most evil of the dark arts—and later became leader of the Progressive Conservative Party of Canada. Nobody thought of it much then, since everyone suspected that the PC's were the spawn of Satan himself. But even Satan had to admit "My bad" at the horror that was unleashed on an unsuspecting nation.

Mulroney raised taxes, cut services, increased the national deficit, plunged the country into economic chaos, signed away the country's independance, blew two constitutional accords, and lied. Then, on his second day in office, he appointed all his cronies to every government position there was, and made up a few new ones for good measure.

By day three, even the mild mannered Canadians had had enough, and the windows of the Legislature Building were smashed in by an angry mob armed brandishing hockey sticks. Mulroney was quite taken aback. When an old woman said to him, "You're a liar, Charlie Brown," Mulroney, ever the clever bastard, responded by conscripting her into the Canadian Armed Forces.

"Stop your complaining! At least I'm not Ronald Reagan!"

Luckily for him, his only elections were in 1984 and 1988, and his only opposition was John Turner (whose entire personality can be summarized by the fact that his middle name was Napier), and Ed Broadbent (Leader of the only party Canadians hate more than the Liberals and Conservatives). Still, like black plague and re-runs of Simon & Schuster, all evil disappears eventually. After a grassroots campaign began plans to send a voter delegation to Ottawa with rifles and plans to separate Brian's bigger-then-Leno chin from his exorbiantly overpriced Italian suit, Mulroney stepped down. He gave control of what was left of the country to Kim Campbell, appointing her to ensure he would only go down as the second-worst Prime Minister of all time. Mulroney's ultimately devious plot to discredit the female gender succeded. He trashed the government, country and his political party, resigned and left the mess to Kim Campbell. As he described, "All in a day's work."

Later, in 1994, the Royal Canadian Mounted Police raided Mulroney's home and made the shocking discovery that he was very closely associated with the asshole, Michael Jackson, through his political career. Upon further investigation, they also discovered that Mulroney and MJ scored crack off of Ronald Reagan in 1987 and while taking it, molested small children. It was also discovered through Mulroney's personal ZIP disk's that he soon thereafter sent the children to work for the North American Free Trade Agreements secret slave sector. 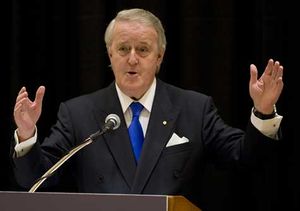 "I only destroyed Canada thisssssss much!"

After leaving office, Mulroney escaped the burning wreckage of his policies with the many millions he stole. He went underground, once more become an active lawyer and holding down the fort in Westmount. He has spent much of the passing years trying to recover from his completely trashed reputation. His reputation for being an asshole has lost some of its esteem as the leader of Canada eventually became Stephen Harper.

He raises his 4 children: War, Famine, Death and Pestilence. All four visit the many towns and cities around Canada (mainly the ones where the permiers who voted down the Meech Lake and Charlottetown Accords reside) and bring what their names are upon the unsuspecting people.

He has been admitted into hospital many times for broken ribs and poisoning caused by disgruntled Canadians against heavy personal purchase taxation.

While many "academic" sources try to find good things he did (for balance purposes) Mulroney's only real accomplishment was the successful promotion of Canadian Unity. The nation was united in that everyone hated his guts and just wanted to shoot him.

Most younger Canadians know Mr. Mulroney as either:

As Prime Minister, Mulroney left quite a legacy. His historic changes in government policy and the way Canada worked included:

Mulroney left office when the media got wind that his daughter Benita was having sexual reassignment surgery on the taxpayers tab. The result was one of the ugliest men in the world Ben "Dover" Mulroney. Not wanting to be wasteful the Mulroney family saved Benita's breast tissue for implantation into Mila. Brian reportedly said ... 'Now that is more than a handful'.