“Where the hell did all these foreigners come from???” 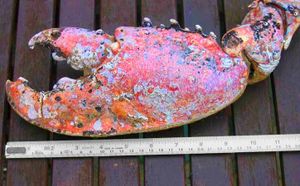 For those without comedic tastes, the so-called experts at Wikipedia have an article about Cape Breton Island.

Cape Breton is an island paradise located in eastern Canada in northeastern Nova Scotia. It has approximately 3 billion inhabitants (if you count seagulls) and is ruled with an iron fist by the malevolent General John Gnatiuk and his glorious new regime. It contains the cities of Glace Bay, Ingonish, Sydney, New Waterford, and the peaceful, drug and violence-free tranquility of the Sydney Mines area. Cape Breton is known for its roaring economy, clean-living lifestyles, tropical climate, pothole-free roads, and the general hard-working attitudes of its people. In 2010, an actual national study ranked Cape Breton the "least intelligent" area of Canada, which, sadly, is no joke.

When entering Cape Breton, visitors are advised to set their clocks back 30 years, remove their thinking caps, and lower their standards. If confronted by John Gnatiuk, Cape Breton's self-proclaimed bossman, a good kick to the balls will do the trick. 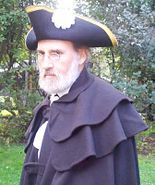 A caped Breton, not to be confused with a Cape Bretoner.

Hot and arid. Cape Breton is known for its tropical climate year round. The average annual temperature is between 90 and 95 degrees Fahrenheit (32-35 Celsius). That's pretty fuckin' warm, man. The only place on Cape Breton which has ever recorded snow is the peak of Kelly's Mountain, which, at over 80 thousand feet, is the tallest mountain in the world. Jetsetters from all across Europe and the US flock to Cape Breton in January and February to escape cold winter temperatures and to experience Cape Breton's vibrant nightlife.

Highway 125 is the pinnacle of the Canadian driving experience, perhaps the ultimate in driving altogether. Virtually all of the world's serious drivers have heard of it and longed to take their shot at conquering it. Teutonic cars are known for their precise engineering and craftsmanship; the 125 completes the driving equation. This is a twenty-lane superhighway where cars are barely a blur as they whiz by. 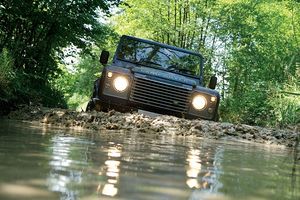 For those who like to "Safari" it, then highway 4 provides the exciting challenges because many have ventured out on it and are never heard from again.

Along with our 12 lane Autobahn, there is a class of high-speed trains that travel at 513 km/hr on electrified rails that provide a “State of the Art” passenger service link between Sydney and Halifax. A 105 bi-current locomotives and matching cars were specially designed for this task. There always has been a constant threat that “European” spies will steal the blue prints for these prized locomotives. There are two runs per day. 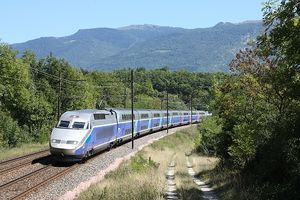 Cape Breton has many wonderful attractions including: 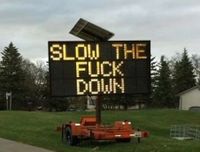 The Canso Causeway is a massive bridge-like structure ( Over Nine Thousand times larger than that Golden Gate Bridge) that links mainland Nova Scotia to Cape Breton. The Causeway was constructed by mainlanders in 1987 when Newfoundlanders complained that the only place they could get to from the Nfld. Ferry was Cape Breton.

All of Cape Breton's wild animals are currently kept at the Two Rivers Animal Correctional Facility. This is a minimum-security facility, which will house the animals until they overcome their various pharmaceutical addictions and behavioral issues.

Of the wildlife endemic to Cape Breton, perhaps the least known is the "Cape Bretonese Field Lobster". These amorous crustaceans are seldom seen, but their mating calls, which sound similar to discharging shotguns, can often be heard on warm summer nights around the communities of Sydney Mines and Bay St. Lawrence.

The sasquatch is another creature native to Cape Breton. Its habitat is limited to Kelly's Mountain and behind the Co-op in Neil's Harbour. They can be difficult to spot as they look like shit, allowing them to blend in seemlessly with their surroundings.

There have never been any skunks on Cape Breton Island, which has led some people to believe that maybe they know something we don't. 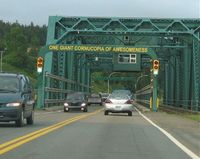 One Gigantic Cornucopia of Awesomeness

Some of the diverse species of Cape Breton:

Cape Breton is home to various sports teams including the Cape Breton Shithawks who have won the Stanley Cup 98 times since 2001. Their Main competion is the Chebucto Faggots who have added agressive russain steriod user Chris M. who lovse to skate onto the rink with clamps on his nipples. to their front lines. Glace Bay also has a successful rugby team, The Pillheads, who, because of heavy abuse of prescription painkillers, are unable to feel pain and are an unstoppable force on the field, and the New Waterford girls hockey team, The New Waterford Virgins. Other professional hockey teams include the Ingonish Kazakhstians, and Ingonish Bolivians who have both been Stanley Cup Champions 60 times each.

It is unfortunate to make mention that this team no longer exits. They have been replaced by a more popular athletic team known as Cindy Carey’s Mother’s Boyfriends. During the early 1990’s it’s a known fact that Cindy Careys’ mother “Rachael” was romantically involved with an estimated 21 men. Fine men of the Irish isle and broken whelps of Sydney Mines, these men found warm delight in the arms of Rachael Carey. Present day spot fanatics admire the physical prowess of this team. Aging from 16 to 52, this team provides an awe induced level of horror.

In 1966, the U.N. voted unanimously that certain dumb-ass Cape Bretoner's shouldn't have a nuclear power plant. Cape Breton protested, arguing that it was Buck Einstein, of Meat Cove, who originally invented the atom, and as a result, nuclear energy. Despite UN Sanctions, the Lingan Nuclear Power Facility was in full operation. This spawned a number of stupid hippie wannabes to flock to Lingan and protest. They were later appeased when it was decided that fellow Meat Cove resident Homer Simpson would run the plant

Future plans may or may not involve North Korea.

The Kingdom of Cape Breton and Manifest Destiny[edit]

When the Honorable John Boutilier Cabot Trail first discovered The Royal Isle of Cape Breton 9001 years ago, He was greeted by the natives which offered him friendship and knoladge of the land, and in return he enslaved them for hundreds of years.

Then one day, while on a massive shroom trip, the gods spoke to him and said, "Stupid human, don't you know you're the first to arrive at the Super Island which will one day dominate the globe? You're the first absolute king of the world's future."

Thus was created the Kingdom of Cape Breton with its first ruling monarch, the Honorable and Veneratable Sir John Boutilier Cabot Trail. Thenceforth, it was declared that Cape Breton would absorb the rest of the world politically, economically, culturally and maybe even linguistically; if anyone could make them out.

Currently, The Royal Isle of Cape Breton's Kingdom stretches over vast regions, from the barren and inhospitable wastelands of Cheticamp with their desert dwellers in the West, to the sprawling metropolis known as Glace Bay with its cosmopolitan population and bustling economy in the East, from the South where the wooly sabre-toothed horses rule the land and keep foreigners out unless they have a special visa on the oily sands of of Sable Island, to the North and Meat Cove; a rare cultural and socio-historical glimpse into the past where the barbarian hordes of Atilla the Hun and the descendants of Fred Flintstone and Barney Rubble live and propagate.

At this year of 2007 A.D. or 9007 of Our Year of the Honorable John Boutilier Cabot Trail, Cape Breton is ruled by Sir John Morgenstein II and is poised to envelop the Mainland of Nova Scotia as its first decisive conquest before reaching out with its tentacles of influence to the rest of the world.

The idea of Manifest Destiny and The Cape Breton Kingdom's plot to absorb the rest of the world into its own sphere of domination is kept a secret among all Cape Bretoners. If you reveal to a Cape Bretoner that you, for sure, know about the secret, they will shoot lazers from their eyes to instantly vaporize you and your knowledge. All Cape Bretoners have been trained in advanced gorilla tactics and ready for hand to foot combat at all times. If your life has not been extinguished within 30 seconds of divulging the Cape Breton global domination plot, commandos dressed in pink dresses (the Cape Breton Secret Police) will drop from the sky and mercilessly pinch you with plastic lobster claws mounted on the end of sticks.

Unbeknowst to everyone, but the hordes from Cape Breton have made some progress in their plan to unite the entire world underneath the rule of Cape Breton.

"It has come to this humble reporter's attention that, through smoking too much dope, Cape Breton has already made great advances in their divine plot. Consider - government governs a country, but companies have a form of governance in countries which is different from governmental forces, yet sometimes wield significant power, culturally, economically, foodily, politically and some of those other adverbs I used above. Take, McDonald's - a Cape Breton idea, a Cape Breton company, a Cape Breton advance onto the rest of the world.

Cape Breton, well known for having more people named Ronald McDonald than anywhere else in the world at a stark rate of every 1 in 5, is the actual spawning point of the Ronald McDonald we all know and love. He was born in Sydney about 104 years ago to two drug addicts name Bert and Ernie. After birth, he was dumped into the tar ponds because Bert and Ernie were too busy getting their fix of Oxycotins, and thus he mutated into the red-haired albino he is today.

He grew up in the dumpster behind KFC at the Prince Street Plaza, or what it was called way back then, the Prince Street Street, and began yearning for something more when he realized he couldn't stand the taste of KFC anymore, or, to the layman, the Dirty Bird. Thus, he flew to America, the Land of Opportunity (cause Cape Breton was no such land back then) and created McDonald's restaurant, future processed beef emporium of the world.

Thus, realize that McDonald's in one form of Cape Breton's plot of global domination. It doesn't matter whether Ronald McDonald renounced his ties with his Mudder Land 69 years ago after getting caught making illicit phone calls to teenagers and prank-calling alcoholics (a common Cape Breton pastime). It stand to reason that somewhere, deep down in that yellow clown suit, is a heart that beats to the same tune of the Cape Breton nation anthem " ... , uhm... " well, whatever our nation anthem is, I can't remember, I was too busy taking a piss in the snow while they played it last time. "We are an Island" or some other thing like that."