Two Rivers Wildlife Park is a massive zoo located in the Mira River valley in the tropical kingdom of Cape Breton Island it is home to a rehab center for drug addicted animals as well as other local fauna who hang out here because we know how to have a good time. Two Rivers park was started around 8000 years ago when Noah's Arc travelled to Cape Breton and later sailed up the Mira River. His wife was bitching at him to get rid of some of the animals so he decided to unload then in the jungles of Cape Breton. Some Indians who were around at the time promised to look after the animals and it is them who started the park. As years went by more and more animals began to join the park; local and exotic alike.

In 2000, Two Rivers also became a rehab center for animals that have fallen prey to the island's drug problems. Animals are often brought here after they are treated for overdose at the Kennedy Animal Hospital to recover from their addictions. Animal addictions to drugs started soon after humans ones when animals began to consume pills that lie around people's homes or in their garbage. Quickly, addictions spun out of control as animals began to attack people in order to obtain more drugs. John Morgan opened the rehab center shortly after he ascended the throne in 2000 to deal with the problem.

In 2000, Mayor Morgan converted part of the Park into both a jail and a rehabiliation center for criminal and drug addicted animals. The animal drug problem came to light when Shopper's Drug Mart was robbed by an oxy-addicted sasquatch. A few days later, a grizzly bear mauled a pharmasist at Pharmasave when he refused to give him drugs. People in Cape Breton began to fear animals and began to engage in guerilla warfare on them. Gorillas were reportly outraged at humans for this and declared gorilla warfare on them in response. In order to quell the violence, Morgan began using the wildlife park as a jail and rehab center to take animals who are addicted to drugs or who have committed crimes.

Animals located in the Park[edit] 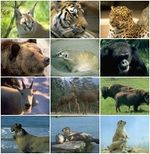 Some of the animals who call the park home

More fauna of the park