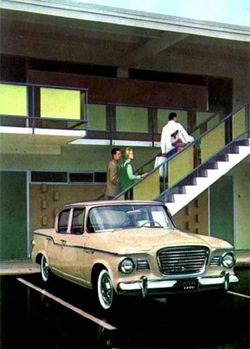 The Studebaker Lark: The preferred car of adulterers everywhere!

The Studebaker Lark - a model of automobile manufactured by the Studebaker Corporation, was the only car that ever mattered to Canadians.

Oh, sure, Canadians had their Meteors, their Monarchs, their Acadians and McLaughlin Buick's. They even had their Frontenac's for that memorable six month period in 1960: good times.

But it was the Studebaker Lark that captured the hearts of those curious, but hearty people north of the border from the United States.

The studebaker is very very very very very very very cool! In 1957, the Studebaker Corporation was hemorrhaging money like heir of the Romanov throne on a good day. Cash-strapped, with no new products on the horizon, America's oldest automobile company undertook a gutsy, gutsy move; one GM, Ford and Chrysler would never have considered, until 2009: they took their line of automobiles and literally chopped a couple feet off the front, and a few feet off the rear. This created an odd looking, stubby car, so they decided to work out a few kinks by giving it a God awful front end, and rear end only a buyer with cataracts could love.

The end result was awkward. So they decided to toss in a bit of whimsy and they named the car the Lark in hopes that people would get the joke, and not take them too seriously.

Oddly, the scam worked. Studebaker sold a boatload of these cars in 1958 and 1959. New, nifty and held together with caulk and prayer, the Studebaker Lark was such a success that it catapulted Studebaker from being the eleventh best selling car brand to being the tenth best selling automobile brand in North America. Happy days were here again! To advertise the car they hired Zsa Zsa Gabor to promote the thing to the car buying public.

But fate is an even more cruel mistress than Zsa Zsa Gabor. By 1960 Ford, Chrysler and General Motors wanted a piece of the ugly car market for their very own; to that end they introduced the Falcon, the Valiant and the famous Chevrolet Trabant. The competition was brutal. In 1963 the Studebaker Board called it quits in the U.S., deciding instead to go it alone in Canada, where they could use up the parts on hand and make a few quick bucks playing the currency markets.

A funny thing happened on the way to Regina[edit] 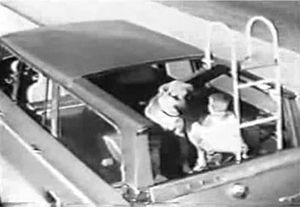 Studebakers were available with all sorts of cutting edge options, like a station wagon with a retracting rear roof that could be ordered with a built-in child slide to keep junior busy on those long trips to PEI to visit Grandmother. "And the slide is triple bolted to the frame - no need to worry about baby! And we'll guarentee that your dog will love it too!"

So in early 1964 the Studebaker Lark became "CANADA'S OWN CAR" with great flourish and fanfare. Finally, Canadian workers would build a car, a unique one at that, for the world. Oh, sure, GM, Ford and Chrysler were building cars in Canada, don't you know, but the Studebaker was a special car, something unique and Canadian, like Timmie's.

And boy, did they crank out some really memorable models. Like the station wagon with the rear roof that would slide forward so you could move a refridgerator standing up - and we all know how hard that can be in a Volkswagon. Another memorable model was the Lark that came with four headlights, instead of just two. "That's what we at Studebaker call progressive thinking!"

And Canadians, all 1,000 of them, bought them droves, mostly because everyone had a cousin who was working at the plant. They bought enough to keep making them in 1965, and into 1966 as well. And then...

In 1966 the Studebaker Board of Directors decided that, having used up the parts in the warehouse, they would stop making cars. With those currency rates (the U.S. Dollar was worth like $1.50 in Canadian money in those days) they could invest the profits in a nice stable bank with a good rate of return, and get a toaster for their trouble. The Studebaker was dead. Long live Studebaker.

Thus spelled the end of yet another dream of Canada. Yet these brave people, that exist on a diet of moose-slathered maple syrup, ensconced and protected from the harsh summer chill by their beaver coats, vowed to soldier on.

"One day," vowed Pierre Trudeau, "I'll marry a woman half my age! And that will teach you!"

And that one day came in 1980 when American Motors Corporation decided to build its Renault Alliance in Canada, but that boys and girls is a tale for another time!