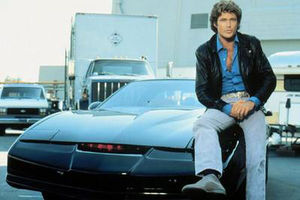 KITT with his longtime partner and indentured chauffeur, Michael Knight. Courtesy of the Archives of FAG.

The Knight Industries Total Trash, or KITT, is an intelligent driving robot in the TV series Knight Rider. It is one of the very few computers in fictional existence not to be murderous. Its operator is the modern-day elitist private investigator knight Michael Knight. It is one of the very few bisexual protagonists available on TV. Most of the people who know KITT treat it as if it were a man. But it can also pretend to be a woman. The Knight Industries apologize for this inconvenience. All other cylons created will be of specific gender with prominent sex traits to assist in their sex identification.

Knight Industries formulated this design before they realised that KITT could get 300mpg instead of just 70. Oh, and the part about the speed.

When detective Michael Long accidentally crashed into a casino believing he was playing Grand Theft Auto IV, his injuries were nearly fatal, and his Pontiac Trans Am was severely damaged. Long was taken under the Knight Foundation for Law and Government, a group of government-distrusting elitist snobs noble philanthropists who wished to fight crime. While Long was receiving treatment and a new identity as Michael Knight, his Trans Am was undergoing even more major surgery. KITT was outfitted with HAL 9000's voice synthesis engine and navigation systems, GLaDOS's design philosophy and emotion spheres, Linux, and the flux capacitor. It was also outfitted with two TV screens stolen from Elvis Presley's estate.

When Knight was shown the new car, he was utterly baffled, and mostly criticized the revamped interior design and pondered the need for KITT to have a driver's license, but soon warmed up to the new car after finding that he would be assisting as well as listening to KITT's smooth voice.

KITT has an incredibly complex propulsion system and an even more complex AI. Designed with the environment in mind, it gets 300mpg, yet the engine is incredibly powerful, with speeds of up to 300mph; the computer is actually connected in a series of tubes to Deep Thought, GLaDOS and HAL 9000, in addition to taking up most of the trunk space. There is a satellite radio and TV tuner, not for the driver to enjoy: KITT is an intense fan of the Androids, as well as Knight Rider. 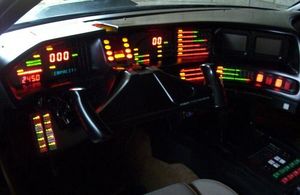 KITT's dashboard, above, has often been criticized for the incompleteness of the steering wheel.

The dashboard consists of:

There are other more notable features, including the molecular bonded shell (patent pending), which protects the very expensive crude oil-colour paint of the car.

From this point on, it was clear that Knight and KITT had more than just a driver-and-car relationship, but also a knight-and-squire relationship. Contrary to popular belief, Knight was in fact KITT's indentured servant and squire, KITT being the crime-fighting hero. They solved cases and fought villains for several television years, including an evil twin, an estranged relative of Wilton Knight, and crime in general.

Around 1987 the Foundation for Law and Government, KITT's chief sponsor, went bankrupt, as a result of a buildup of speeding tickets, general lack of crime due to the activities of FLAG, and the high maintenance costs for KITT's technology. This heralded the "Freelance" period of KITT, where it and Michael Knight roamed the country doing good deeds and getting sued for doing them more often than not. Their funds were provided by private sponsors, who kindly only mandated the engraving of their companies' logos on the bonnet.