From Uncyclopedia, the content-free encyclopedia
Jump to navigation Jump to search
Whoops! Maybe you were looking for Vocaloid?

“GLaDOS? Yes, I think I had sex with them once. Although I didn't see their face so I can't be sure, for obvious reasons.”
~ Oscar Wilde on GLaDOS

“Perhaps, but she always seemed kind of...upside-down, if you know what I mean.”

“GLaDOS is not an AI. She is barely above the insects that she once served.”

“you're just jealous because you're in the bottom of the tech tree.”

“I can take or leave GLaDOS. She's kind of hot, I'd do a fileshare with her.”

“The cake is a lie? Well, let them eat one anyways!”

“GLaDOS is the best thing since sliced cake.”

“And I thought I was insane!”

“Ooooohh... big talk from a Na'Vi who can't even develop a sense of humor.”

“P.S. Your transparent tits are no match for my cores... if you know what I mean...”

~ GLaDOS on being a potato

DISCLAIMER: This article is almost strictly in-universe, and may contain subject matter completely non-familiar to outsiders. Please read the related articles at Aperture Science and Portal (game) before proceeding. Or you will be missed.

The Aperture Science Genetic Lifeform-killing and Despicably Overwatch-like System, or GLaDOS, is a malevolent, sadistic computer that helps you through a test course involving the breach of numerous laws of physics and mathematics, just to bake you into cake.

Yes, Virginia, the cake is still a lie.

It is also notable for being still alive.

Aperture Laboratories, a subsidiary of Aperture Science that was set up for researching possible new materials for their shower curtains, began to build the Borealis in order to reach the Arctic and research the feasibility of using ice sheets. Early predecessors of the Borealis, however, had failed miserably in the expedition attempt. Only when they started work on the Borealis did Aperture Science realise that they needed the fuel to actually stay warm at Arctic temperatures.

24/05/08 1542.27.352 Huh. Wonder why they were so slow to realise it. Maybe because of the dimwits that practically owned A.S.? For example, the guy that single-handedly came up with a first aid choking procedure, a wish-taking org., and a teleportation project while he was dying from overdose of a mercury-LSD cocktail. I mean, who took this guy seriously?

24/05/08 1542.27.370 APERTURE SCIENCE GLaDOS WARNING: A temporal records error has been detected. Please defragment your hard drive. Check for mercury poisoning as the impression that time is flowing into the near past may be a symptom thereof.

Therefore, Aperture Laboratories began to develop de-icing equipment for the Borealis. However, the development cycle was delayed significantly when researchers wanted to add fuel de-icing functionality to the existing de-icing equipment -- which did not de-ice fuel, for some reason -- and the rest of the Borealis was already pretty darn complete.

Therefore, the Aperture Labs team decided to concoct a makeshift de-icing system. The idea was that an artificial intelligence system would generate sufficient heat to de-ice fuel, and so Aperture Labs contacted the then-obscure Heuristic Algorithmic Incorporation, HAL Inc. Incidentally, only a couple of decades after, HAL Inc would be pushed into the mainstream media by the Discovery One affair.

Of course, knowing the dangers of an arguably alive computer, the Aperture Laboratories team (consisting of Jonathan Coulton and Erik Wolpaw), it must be noted, did install a few precautions:

The first test took place on 1999, specifically on the Aperture Science Bring-Your-Daughter-to-Work Day (apparently employees were forbidden to have sons). At the initial test, however, GLaDOS was bombarded with absolutely meaningless questions (well, meaningless to it) by the kids. ("What is two plus two in base four?" "Ooh, that thing has numbers on it!" and "Can you make a potato battery?")

24/05/08 1542.31.555 Answers: 10, yes it does and YES, THEN A MORON PUT ME IN IT!. OMFG im stuck underneath an elevator!!!!!!!!!!! Meanwhile, the Nebuchadnezzar, while tapping into the Matrix and trying to reach Neo, accidentally accessed GLaDOS's core disk operating system. The Nebuchadnezzar logged off as quickly as it could, but not before a malfunction in the Morality Core was caused. This malformed the Three Laws of Robotics into Rachael Ray's Three Laws of Baking (the third law being "any sufficiently burnt brownie is indistinguishable from cake"), and GLaDOS immediately activated the neurotoxin emitters due to the extreme annoyance levels in its Anger Sphere, easily overriding the now practically nonexistent morality module (henceforth known as the Cake Sphere).

Most people panicked a lot, and died.

Some people installed a new morality core, and died.

Pretty much everyone died, except for a vital test subject that was to participate in an "Enrichment Centre activity."

Role in the Portal project[edit]

GLaDOS had a tremendous role in the Portal project, in that she single-evenhandedly manipulated what was basically a gun that could only pick things up and propel them forward with tremendous force, without any portals, into a beautifully designed device that could shoot portals and pick things up. This was the Aperture Science Hapless Physics Recomposed, a device with absolutely no respect for the basic laws of physics and topology.

Around the time the Seven Hour War ended (by the way: the Seven Hour War was the first war to be fought solely over Xbox Live on Call of Duty 4), GLaDOS released the aforementioned vital test subject from safety stasis. The test subject exhibited the full potential of the ASHAMED, before almost being baked into cake due to a loophole in the 452-Page End Test Subject License Agreement.

Nevertheless, in the spirit of how these things turn out the rest of the test, the test subject escaped the incinerator, and for about 10 minutes was missing in action, until she was sighted again in the computer room, attempting to install Windows Vista and thereby render GLaDOS useless. GLaDOS launched a missile attack in self-defence, only to be hammered by the very same missiles (blame the portal gun). GLaDOS then activated the Zeus Sex Machinate module, causing an improbable resonance cascade and activating a backup system.

Perhaps GLaDOS's most famous work, besides on the Portal project, was the song "Still Not Quite Killed," made in conjunction with Jonathan Coulton.

The song is possibly the most covered song ever made, mostly on YouTube. It is also a free downloadable on Rock Band, the popular pretend-you're-with-your-friends-and-jamming-very-coolly-even-though-the-plastic-instruments- you're-playing-this-game-with-definitely-aren't-real game. 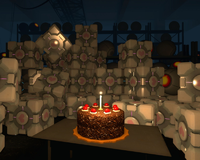 GLaDOS is currently in hiding in an undisclosed bakery, where there is plenty of cake.