Note: This article is a lie.

Aperture Science: We do what we must because we can.

Hello, and, again, welcome to the Aperture Science Computer-Displayed Uncyclopedia Entry Page. We hope your brief stay in the other articles has been a pleasant one. Your query has been processed and we are now ready to begin the article proper.

I'm GLaD you asked me that.

Rest assured that your Self-Wash Containment Cloth will not threaten to stab you during your self-washing process, and in fact, cannot speak, despite the Aperture Science 1960 Psychotic Self-Wash Containment Cloth Stabbing Scandal, and that the appearance of the word "Science" in the name of our company is merely a device to enhance the hygienic impression of the company.

Aperture Science somewhat changed its direction towards science thanks to the Aperture Science 1978 Three-Tier R&D System. Rest assured that any rumours of our founder having come up with this plan after contracting mercury poisoning in an attempt to poison the Naval Appropriations Committee is merely an outright fabrication by Black Mesa and you are an excellent entry reader.

- Portal project (which did not, does not, and will not exist. Honest!)

Soon after the 1978 Three-Tier R&D System was concocted by our founder, he expired, and died for this soon after.

While the first and second tiers did their part towards improving man's place in mankind, all efforts were concentrated on the Portal project (the Uncyclopedia Entry Page takes this opportunity to remind you it does not exist) due to possible applications with the shower curtains. (The part with the shower curtains was later dismissed as a perverted idea, and was scrapped early on.)

Meanwhile, Aperture Laboratories, a subsidiary of Aperture Science that was set up for researching possible shades of colour for the Self-Wash Containment Cloths, began to build the Borealis in order to reach the Arctic and research possible applications of polar bear fur in the Self-Wash Containment Cloths. It was at this time that Aperture Laboratories began to develop de-icing equipment for the Borealis, as well as a disk operating system and a genetic lifeform. These three research departments were later merged to expand the Aperture Laboratories Polar Bear Fur Shower Curtains Department, and thus the Genetic Lifeform and Disk Operating System began development. (Note that this is one of the most ridiculous ideas in equipment amalgamation. Oh, sorry, I was referring to the iPhone.)

This was tested on the Aperture Science Bring-Your-Daughter-To-Work Day (as Aperture Science was reverse sexist at the time), and in many ways the initial test went well. Knowledge of a dangerous Genetic Lifeform AI Morality Component malfunction resulting in the release of neurotoxin will result in immediate disqualification from reading this sentence, followed by death.

No further information is required or will be provided and you would make an excellent test subject for the nonexistent Portal project.

Tell me more about the Portal project.[edit]

The Portal project is a nonexistent project regarding a man-sized quantum ad-hoc tunnel, with varying possible applications.

What applications you may find useful will vary based on your mindset.

If you are a productive citizen:[edit]

- For a safe and healthy work environment

- Helping us to help you help us all

If you are a perverse citizen:[edit]

- Making people fall from the top of concrete skyscrapers

If you are a procrastinating citizen:[edit]

- Fetching food with the pull of a trigger

- Shooting down security cameras without a really tall ladder

- Draining the ocean to fill up your pool

If you are a proud citizen, then you have no business with this project so please move quickly to the next section.

Can I sign up to beta-test the Portal project?[edit]

Sure. You may sign up at the Aperture Science ARPANET

- A knowledge of decades-old technology including TUI's

- A liking of cake

- An intense hate for Black Mesa

If I want a job at Aperture Science, what do I do?[edit]

Just read this and we will be GLaD to give you a job: 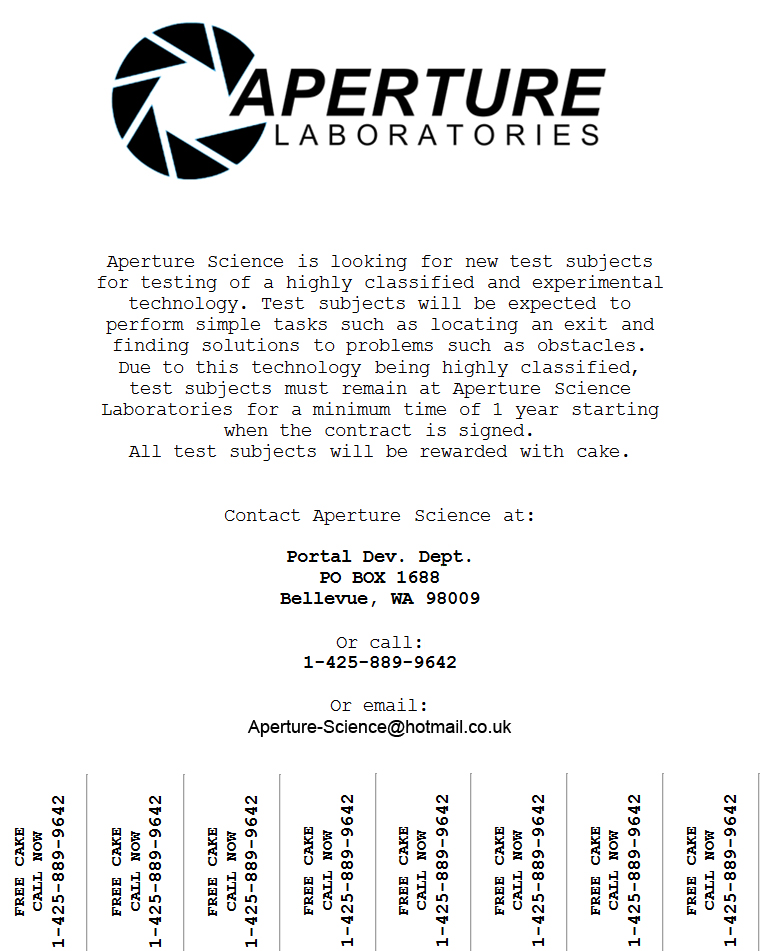 Thank you for helping us help you help us all by participating in this Uncyclopedia Entry Page reading.