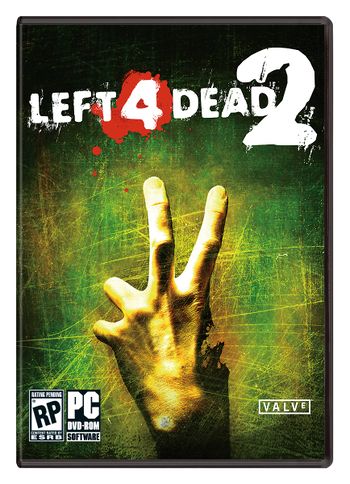 The L4D2 PC Box Art. Notice the confusing symbology of the numbers in the title and the number of fingers on the hand.

For those without comedic tastes, the self-proclaimed experts at Wikipedia have an article about Left 4 Dead 2.

Left 4 Dead 2 also known as a "cheap money-making sequel to an already good game" [yeah, right], is the second installment in Valve's zombie-slaying and noob teabagging series, preceded by the original installment, Left 4 Dead, which was released the year before Left 4 Dead 2's release. Like its predecessor, Left 4 Dead 2 features a highly intelligent and arrogant AI Director, who makes sure no two games are the same. And also, like its predecessor, Left 4 Dead 2 features zombies, which will be your enemies. The game features four new cardboard cut-outs for you and your friends to play as and mock at for their respective ethnicities and behavior. There are also new weapons to make arguments over weapon preference longer, together with new infected to shoot them with.

Left 4 Dead 2 still retains some characteristics of its predecessor, such as weapons and special infected. Like Left 4 Dead, Left 4 Dead 2 has the Cooperative, Versus and Survival gamemodes, while introducing two new modes, Steal Shit and The One Where the A.I Director Violates You.

The four characters (codenamed 'Survivors' in the game) are described by critics and players as "realistic and lively", despite their tendency to just unnaturally watch each other die whilst they are under the control of the AI Director. [That's bots for you.] The natural voices keeps the realism intact, in an extent that they actually sound hilarious without mentioning anything about "pills".

They are well-armed with weapons, like pistols, baseball bats, crowbars, shotguns, AK-47s, chainsaws, bad breath, foul language and candy canes. Like the previous survivors, they also come with the all-powerful melee attack that could literally push cocaine onto a vicca, except for those that are unequipped with physics, tanks and witches.

From left to right: Nick, Rochelle, Coach and Ellis, in their everyday pose of staring at the Southern Horizon whilst shooting zombies

Coach is an overweight Afro-American man who was raised in the South by his syrup-totting grandmother. He could be heard in game praying not to summon Jesus to help him and his fellows but rather to keep every food remaining on earth safe and sound. Despite his size, his recent background in playing football and managing a sports team (as suggested by his name) helps him keep up with his companions. A vastly-memorable quote of his: "My friends call me Coach!" It is unknown who Coach was referring to, seeing as he has no friends.

Sporting a white suit and pants that are never riddled with dirt, blood, or boomer juice for more than 15 seconds, Nick does what he does best by dispatching zombies as if he doesn't care while mocking Coach's obesity. The man is often seen snapping awkward or sketchy pictures of other survivors and zombies to be used late as blackmail, alluding to the fact that he may be an agent of a discreet journalist branch of the Mafia. Nick is a rapist at heart and will rape anything with "TITS!", Zoey and Rochelle are in dire trouble at this point in the mission.

A total redneck by heart, Ellis loves NASCAR, horses, and killing zombies, some cool new hobby he has picked up after some weird flu virus spread throughout the world and turned people into freaks. His best buddy, Keith, often enjoys skipping "right to the shack stage." Ellis has many stories about hanging out with Keith and can usually be heard talking about him, though hes usually interrupted by that pissy black Chick.He can often be seen loving horses and healing Nick. Also in "The Passing," he falls in love with Zoey, then they go out, and then they GET IT ON! and talking about a jockey humping his head...Since Ellis left with his comrades for New Orleans after his one-night stand with Zoey, there is no knowledge about whether or not she got pregnant (and Valve does its best to avoid making new DLCs for the original game, as well as delaying Half-Life 2: Episode 3).

The biologically essential female, now in the hip new shade of black! In "The Passing," she falls in love in Francis. Rochelle offers as much use as a common house plant. Her fucking gigantic re-god-damn-diculus lips were originally supposed to serve as a shield she could protect the other survivors with and, on occasion, punt the Tank with. However, the designers removed this feature.Seriously fuck this fat cunt bitch i hate the fucking cow.

Left 4 Dead 2, in addition to new survivors, weapons, and campaigns, also includes new special infected to play as and teabag once killed. Each carries its own special ability, strengths and weaknesses, and roles to play in an infected team.

A mentally challenged senior citizen with parkinson's disease, the Jockey attacks the survivors by jumping onto one of the survivors backs then humping him/her until the survivor grows tired of the Jockey's strange back fetish and dies. The Jockey is characterized by its very small stature (less than two feet) and hideous giggling that could be heard at least twenty yards away or more.

One of the lesser-seen zombies that can be found in Left 4 Dead 2, the Tank is the obsessive weight-lifting cousin of the Charger. The Tank is not to be confused with the large superhero with whom it shares the same name. This creature, as titled, is merely a common tank about the size of a grizzly bear whose speciality is that it possesses the ability to beat the living hell out of a survivor.

The boomer isnt a zombie but a fat american who plays COD, all the time, such as VALVe's fat-ass representative Gabe Newell. On the last day of being alive he thought "Hey, I wonder what an apple tastes like?". That's why they have a tendency to puke everywhere. For some reason zombies LOVE puke and CEDA agents carry it around? What did they do make them puke in a bottle?!? FACT: If you make them jump they look funny!

The Smoker is what you call a chav. Its hobbies are smoking weed at a bus stop and going Tesco express.

The Hunter likes to rape people and do what he thinks is a great impression of Micheal Jackson. The hunter is the most annoying stumach fucking zombie. HE runs around going 'RAAAAAAAAAAAAAAPEEEEEE' and 'I want your music'. He is a litano he was raised by listing to gay ass music and trained to rape anything in sight He also likes cookies.

The Witch. The Witch is a quag. The Witch is a bitch who just cry's all the time and makes life shit for everyone around her. Her reasons for crying are unknown but it leads most people to think shes crying because her blackass boyfriend made her suck his dick and she got zombie aids soon after everyone hated her. If startled she will attempt to bite off your dick unless you are Rochelle then she takes your pussy. Her cry may be deceiving, but don't for a second believe that she is human. Her 10 inch acrylics that she just had done at the salon last week are lethal. The best known way to end your L4D2 session is by hitting her in the back with a machete or fireaxe.

Unlike the previous game, Left 4 Dead 2 composes of five campaigns of unequal length that encompasses around many different areas in the South, preferably in the state of Louisiana. Most of them occur during daytime, the kind of break everybody deserved after fighting non-stop in a world of darkness. Additionally, the campaigns seem be arranged in chronological order, for their settings are closely related to each other (damn i love this game) and i dont know why.

Trapped in a burning hotel, the four survivors escape from the inferno and head down to a gun shop where a friendly old gun shop owner offers them free guns and passage in exchange for cola, since he was too busy masturbating in his fortified barricade on the roof of the gun shop. After doing the old man a favor, the four survivors make their way through a mall, looking for an evac, only to find out that the center was overrun. They escape through a stock car parked in the mall's atrium, left by some famous fictional stock car driver whom Ellis greatly admires.

The Survivors abandon their stock car after encountering a massive line of abandoned cars on the highway. They make their way through Whispering Oaks, an overrun carnival, where they run a roller coaster track and use a pre-recorded rock concert to summon a rescue. " Running the Screaming Oak? Rocking out while killing zombies? Kiddie Land? This is the best day of my life!", says Ellis. Holy shit! Is that a clown?

After finding out that their helicopter pilot was presumably infected, Nick shot him and their chopper promptly crashed. After the ordeal they have to cross a mile of swamp terrain, battling zombies and mudmen as they go. Eventually they reach an abandoned plantation where a nearby man named Virgil awaits survivors to rescue using a boat.

Virgil appears to be short on fuel, and sends the four survivors to go get some diesel to power up their boat. The survivors will have to go through a small village, a sugar mill, and a cornfield to reach the nearest available gas station. They trek back to Virgil when a huge storm covers the sky and showers the survivors full of water and flooding the streets while at it. Oh, and there is a SHIT LOAD of Witches(and bitches).

The final campaign of the game, Virgil drops the survivors at the side of the Mississippi River. The survivors go through the city killing more zombies as usual. The military arrives at the city in jet planes, bombing the fuck out of everything that looks like New Orleans. The survivors finally reach the bridge, where they attempt to cross it in order to reach the military rescue stationed on the other side.

“This game is great, but I really miss Zoey so much. This black chick, her name...'Rochelle', amirite? She's just not doin it for me, so, you know...”

Critics and fans all around the world and the Steam forums have described the game as a great sequel to the original game. Although some were disappointed by the game's quite high price and the disappearance of Zoey, the game was still pretty good for it's price.[This is quite a biased review and must not be taken as fact] [Neither should that last citation.].

Left 2 Die 4ever, a bestselling novelization of the Left 4 Dead series broke fiction records recently. It chrnoicles the story of bob, a sandwich vendor and his quest to defeat the Plague and save the world. Critics couldn't agree more.

“Wow I felt like I was on drugs reading this. Sure the grammar sucked but it made it even funnier! “Dam fukers I has no guns! I QUIT” ROFLMAO”