From Uncyclopedia, the content-free encyclopedia
(Redirected from Mall)
Jump to navigation Jump to search
“'I wish they taught shopping in school.'”

Shopping malls are America's first and premiere choice for shopping. Shoppers can buy anything at the mall, from harmonicas to the original cast of M.A.S.H., provided the item exists, and even if it doesn't. Shopping malls have 1 or 2 or eleventeen anchor stores* and numerous small in-line stores. Accept nothing less. Most malls contain a Macy's, Starbucks, Pottery Barn, Gap, Needless Markup, Starbucks, the 4 hour line for a seat in the Rainforest Cafe, American Eagle Outfitters, Abercrombie & Fitch, Banana Republic, Hot Topic (located next door to the Disney Store), Starbucks, Gap, Build a Bear Workshop, Starbucks, The Ganja House, Baby Gap, Victoria's Secret, The Little Shop of Horrors, Gap, Nordstrom, a multiplex, and a Starbucks conveniently located on every corner.

If you are planning an excursion to your local mall you should take comfortable shoes, a first aid kit, a sack of potatoes, your neighbor's kitchen sink, and a guide dog to find your way out. Keep your eye on the guide dog at all times or it will slip away, find a mate, have puppies, and set up housekeeping in the Build a Bear Workshop.

A chicken in every pot, a car in every garage, and a Starbucks on every corner.

The Zarathustra bible of 8000 B.C. reveals the origin of the shopping mall.

It was under the third full moon that Baal decided to punish humanity. His curse was called... the shopping mall.

From the Zarathustra bible, page 86.

Shopping Malls Through the Ages[edit]

Malls have existed throughout human history and may predate life on Earth.

Cave paintings show caveman malls supplied the fledgling human population with caves, spears, bearskins, cave paintings, and Starbucks drinks. Several cave people are depicted asking sales clerks for fire, but as fire wasn't invented yet they had to settle for those fake fires made with tissue paper and air pumps. 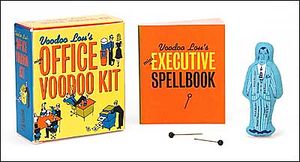 available at a Witches 'R Us near you

Not many people know this, but I own the first radio in Springfield. Not much on the air then, just Edison reciting the alphabet over and over. 'A' he'd say. Then 'B'. 'C' would usually follow...

Malls nearly became extinct during the Great Depression of the 1930s. They had to stop selling Starbucks drinks and were reduced to selling dried apples and Prozac. They couldn't afford employees, so they relied on free labor from elderly people. This meant shoppers had to endure long, rambling stories about how malls, life, and everything was better and simultaneously harder in THEIR day and young people today don't appreciate anything. The most oft-told stories concerned how they had to walk 10 miles to school and back in knee-high snow all year round, uphill both ways and that was the way we liked it!

Malls have become the preferred venue for the new phenomenon of power walkers, both individually and in groups. Power walkers should be avoided, as they are known to trample anything that gets in the way of their path to physical fitness, including small children, babies in strollers, dingos, Hummers, Hare Krishnas, tour buses, and the population of downtown Tibet.

A danger frequently encountered in today's shopping mall is survey takers. Survey takers pursue their prey relentlessly and will spend years following you around asking questions about your political views and what brand of shampoo you use and why. The only known method of escape is invoking the name of Anne Coulter. The invocation will cause creepy violin music to play, the sky to briefly darken, lightning to flash, and thunder to crash, in that order and should only be used in emergencies. 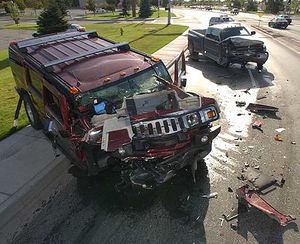 a Hummer that got in the way of a power walker

Another common danger is clerks at the cosmetic counter giving free samples. These clerks are persistent and will not give up until their chosen victim looks like Krusty the Klown and buys every cosmetic in the department just to escape. Once you realize you have been chosen the clerk can be diverted by pointing over their shoulder and saying "Look! It's Paris Hilton!" When they turn their head to look, run and lose yourself in the crowd. If Paris Hilton really is there, run faster.

The biggest danger by far is perfume sprayers. This clan originally splintered off from the Borg and there is no known way to escape this menace. Resistance is futile. No matter how far you run, they will pop up, tackle you to the floor and douse you in smelly perfume. If you are targeted by a perfume sprayer, give in and resign yourself to your fate. When it's all over and they have moved on to their next victim, pick yourself up and move on with your life. Treating yourself to a drink at Starbucks is a good way to start.

Many malls have large elevated ponds equipped with fountains known as wishing wells. People throw loose change in them to appease the mall gods, lest they unleash a plague of Amway salesmen. If you don't have any loose change, items of equal or lesser value may be thrown instead.

Things people have thrown into wishing wells in lieu of change:

Emperor's new clothes in the wishing well (what, you don't see them?)

Malls of today include many amenities to make your shopping experience more pleasant. Parents can drop their kids off in the daycare center and shop secure in the knowledge that if their perfect offspring are eating paste, shoving blocks up their noses or some other kids noses, or flushing Barbie down the toilet, it's somebody else's problem this time.

Food courts have restaurants selling every kind of food imaginable, from McDonald's to Thai, provided it's way overpriced, can be mass produced, and tastes like cardboard. Food courts are usually located on the second floor and feature hundreds of seats, which precludes drive through service, although this hasn't stopped some people from trying. 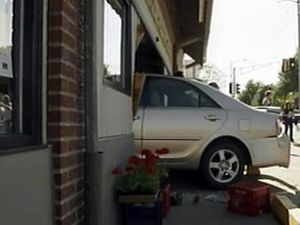 What do you mean, this isn't a drive thru?

Restrooms feature many technological wonders such as self-flushing toilets, automatic faucets, and hand dryers. Unfortunately, no technology exists to address empty toilet paper holders, empty soap dispensers, and water that's either too hot or too cold, which people sometimes sue the entire mall company for. Restrooms are usually located in some out of the way spot that's nearly impossible to find, because restrooms are considered unsightly.

Other amenities include ATMs every 20 feet, photo booths, vending machines that keep eating away money, strollers for parents too paranoid/snobby to use the daycare center, a customer service center where you can complain about that snippy clerk who didn't believe you're a size 6 and refused to accept your maxed out credit cards, and lounges where you can sit and rest your aching feet. Mall management discourages the use of the lounges by piping in Muzak. Shoppers driven into homicidal rages by the Muzak are collected by mall security and taken to a room where they will receive treatment and emerge as perfume sprayers. 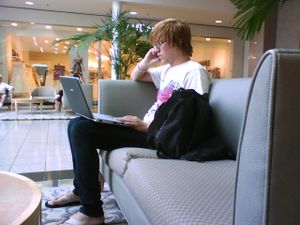 Malls are also a popular place for recreation. At any time of the day you can observe people from all walks of life shopping, drinking Starbucks drinks, and milling around.

Women typically use malls for buying shoes and other pricey items they can't afford. Afterwards, they meet with friends to eat in the food court, where they show off their purchases and whine about how they shouldn't have, but just couldn't help themselves. Then they engage in gossip and making scathingly catty remarks about other women.

Males are genetically predisposed to hate shopping unless it has something to do with cars. If they are forced to accompany a relative, wife, girlfriend or significant other to the mall, they tend to congregate in electronics, sports, hardware and automotive centers, where they talk about cars, sports and what size drill bits are the best. If they are lucky enough to be at a mall that has an auto repair shop, they can watch the mechanics work and provide much needed advice and commentary on how they could do the job better. If there are enough men they can run pools on which mechanic will be the first to chase them out with a wrench, and what kind of wrench it will be.

Teenagers roam the mall in herds, in groups segregated by gender, but never moving too far away from each other.

Senior citizens spend their time sitting on benches complaining about the teenagers, all the milling around, how the world is going to hell in a handbasket and why the hell doesn't anybody sell Black Jack gum anymore? Reminiscing about the good old days of ration books, big band music, and cars with running boards is another favorite activity. 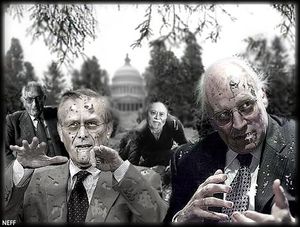 Mall parking garages are Byzantine structures populated by people wandering around aimlessly, trying to remember where they parked. It is rumored some people were there so long they hooked up, started families, brought about a new subculture of youth that have never been touched by natural light or breathed non-ventilated air, and that these youths eventually spawned a race of brain eating zombies called Republicans.

If you park in the garage you should leave a trail of breadcrumbs so you can find your way back. Of course, those breadcrumbs will be eaten by birds, or possibly Republicans, so you should use something no one will eat, like granola.