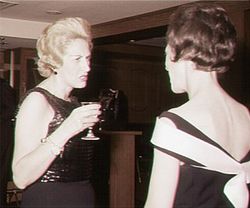 I'm not one to talk ill of others but does Murial think that we were born yesterday? Oh, Bitch, Please!

We on Uncyclopedia would never gossip, but the age-old practice of information sharing is something that does go on just about anywhere there are two people willing to discuss various other people, places, and things that like-minded folks tend to have in common.

And just between you and I, you do know that there are several types of gossip: the spreading of rumor; hushed whispers of innuendo, and the planting of seeds – little morsels of information that get planted to either make people start talking about something or someone, or to see who is trustworthy and who is not.[1]

And again, we must stress that we are not gossips on Uncyclopedia. We would never tell tales out of school. Never. Its a vile thing and nasty habit. But....since you brought it up...we guess that we could share a few things that we know about it....

Well, as we understand it, people have been having an affair with gossip – but of course no one would admit it even though they are all guilty as sin, mind you – since earliest recorded history.

For example, do you know about Cleopatra and Mark Antony? Well, Cleopatra thought that she had it hot 'n' gooey for Julius Caesar, and they were all gaga about one and other when this Mark Antony guy drops down from Rome to help Caesar with the Egyptian problem. Weelllll, no sooner than you can Semper Fidelis, who do you think starts roving those over-mascaraed eyes but Miss Cleo! First, she gets to hop in bed with ol' Julius, and then she has to conquer Mark Antony as well. You know what they say about “playing a dangerous game” - and they were, too. And it ended miserably for everyone. Connie, who works in Uncyclopedia’s accounting department, summed it best when she said that Miss Cleo went and made an asp of herself – that’s rich: an ASP of herself! Active Server Pages, indeed.

Modern take: Its as plain as the nose on your face[edit] 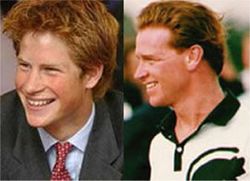 Of course when you give people something to talk about they are bound to speculate. Take Harry Windsor and his birth father. I mean really...

A more modern example of course is the speculation who Prince Harry's real father is. Well of course it isn't Charles - do you see an ounce of Windsor uglies in his face. NO! Poor boy looks just like that hunky James Hewitt that Diana was shagging while old Charles was snarking up Camilla's ditch? And its amazing how quiet that Hewitt has been for someone who could have written a kiss and tell book, so you just know that the Windsor-Mountbatten's are paying him hush money to keep this quiet.

Know Your Gossip, and Its Types[edit]

There are three basic forms of gossip, as explained in the introduction. They are the Spreading of Rumor, Whispered Innuendo, and the Planted Seed.

1. The Spreading of Rumor is the most basic gossip format. One hears a rumor and one simply has to either tell someone, or ask someone else if they have heard it and whether or not it is true. This is not rocket science – think of the spreading of rumor as gossip for beginners.

Example: "Did you hear that User:Some user is really User:Spang?"

2. Whispered Innuendo is a like rumor, but it's more salacious, and it's often drawn from implication. So its motivations are different, and it communicates it as if someone is up to something naughty.

Example: "Have you ever noticed how Some user and Spang are never in the IRC at the same time. And Some user is now denying that he isn't Spang... hmm... If he's innocent, why is he denying it?"[2]

3. Planting Seeds is a method by which an idea (seed) is planted in the mind of another to see what happens. There are two reasons for this.

Example: "My sources are telling me that Paris Hilton is a changed woman who is asking for a parole waiver so she can go to India and nurse lepers in Mother Teresa's colony."

Example: "You know that I would never want this to get out, but someone told me that no one who is on IRC can get a date. Not only that, but they are all twelve years old."

In this case, when everone who hangs out in the IRC starts blanking your articles and voting against them on VFH and against your pictures on VFP, then you know that the person you planted that little with is about as trustworthy as the hull on the Titanic and should be avoided in the future. But now that you've pissed everyone who is anyone off, the only person on Uncyclopedia who will still talk with you is the blabbermouth, so you are fucked as well.

Just because you've asked about who the worst gossip is on Uncyclopedia we'll never tell.

Wild horses couldn't drag it out of us.

Why if we did tell, it would cause such a fuss!

Now that we have gotten the basics out of the way, you do know that everybody from Gladys Kravitz to Interpol is always looking at your every move. Thats how rumors get started. Not that you would do anything wrong, but your reputation can be hijacked faster than you can say identity theft.

And we wouldn't want you get paranoid about it, but you know this is how stories get started. An innocent Uncyclopedia user goes to the search box and types "CHILD PORNOGRAPHY" and before you know it everyone on the block knows what you are up to.

Of course we know that you'll deny it, but when it comes to gossip, the truth is secondary to the sharing of information. So we would suggest that instead of spending so much time with Uncyclopedia, you might want to go out and spend some time with your neighbors instead and do some proactive damage control.

Or, you might want to start hanging out in the IRC because the Cabal is always talking to one another and it's about all you and it's really juicy.

^ 2. It should be noted that User:Some user and User:Spang actually have been in the same IRC channel at the same time, on more than one occasion, as User:Rcmurphy and User:Dawg will both attest, having also been in that channel at that time.