From Uncyclopedia, the content-free encyclopedia
(Redirected from Shoes)
Jump to navigation Jump to search

The "shoe" is a popular article of clothing, worn to protect the sock, which is of course much more important than the foot, as a foot cannot be brightly colored or interestingly patterned, unless of course the foot has been badly bruised by an elaborate piece of metalwork. The use of shoes often prevents injury to the sock by such common dangers such as pebbles, rocks, gravel, cobbles, stones, sharp sand particles and marmosets. It is also considered stylish to wear the shoe atop the head or on an elbow, although experts disagree on the level of protection the shoe still provides to the feet when worn in such a manner.

Shoes are the source of much recent controversy recently as some people feel that confining the foot in a small, poorly-ventilated space so small it often can't turn around is cruel. It is for this reason that it is said that shoes, along with math and avocados, are the work of the devil, and my grandmother agrees.

Few people think of Holland when they think of shoes, but it was the Dutch that were truly pioneers in the field of shoe-making. Prior to the 1300's shoes were a rather expensive commodity, available to the upper class only. The high cost of production kept shoes at a high price and made them unavailable to many people. In the early 1500's, Dutch shoe-makers began to experiment with different means of production, when they stumbled upon a material that was cheap, yet strong and durable; wood. They began to manufacture these wooden shoes, which were later called clogs(named after Casper Clog, inventor of clogs). Even lower-class people were soon able to enjoy the luxury of protective, comfortable footwear. As the industrial age rolled on, shoes made of other materials were produced for even lower cost, rendering clogs obsolete. However, most agree that without the invention of clogs, interest in men would have faded and people would have adapted to a barefoot lifestyle.

Today, shoes are not only a unit of measurement and categorization, but are also used in other ways, such as brushing your teeth or talking to your best "buddies" while on the go. Although shoes today can be bought from stores, the number of shoes owned does not change number of shoes an organism or object has (i.e., 'to have shoes' as opposed to 'to own shoes'). An example:

Jane has two shoes, because she is human. Jane goes the store and buys seven shoes. She owns nine shoes now, but still only has two. Also, she is stupid because, who the hell buys nine shoes?

Axl Rose and shoe, two of the founding members of Guns N' Roses

The most popular use of the shoe is as a foot covering. Most shoes are made out of leather, as it gives the optimum balance of protection and flexibility. However, some of the shoes schedueled to release in year 2029 (the year the paralympics are held atop mount fiji due to global warming) are made of metal, and somewhat resemble a spoon to prevent the shoe from lighting on fire, or getting run over by lambs.

Some sadistic players of games such as AFL wear steel-capped boots, which can be painful when they connect with groins or heads of opposing players. Which, one supposes, is the entire point. In other sports, such as soccer and cricket, players attatch spikes to the soles of their shoes, supposedly to aid the player's running, but in actuality to aid the chances of opposition players being staked through the heart.

Any shoe that is absurdly high-heeled, pointy, and covered in glitter may be deemed fashionable, provided that the woman wearing them can actually stay upright while walking. Knee- or calf-high boots are an acceptable alternative, though they are more often called 'bitch boots' for reasons that seem to be connected to dominatrixes. Platform shoes were popular once, but that is, like, SO last season. Being, like, killed by falling off your shoes is SO uncool. And it's like impossible to drive in platforms! Seriously, you can never, like, reach the brakes, like and it's SO inconvenient!

Some special shoes can be used to perform magic. For instance, When I wear my special uber BLUE shoes, I can fly. Wow.

In certain ancient texts it has also been discovered that magical shoes were a major form of transport back in the days before newton invented gravity. It has also been found that these were merely normal shoes, and that it was the absence of gravity that allowed people to fly. However, the people who found this were cunts, and thus the information should be discarded. 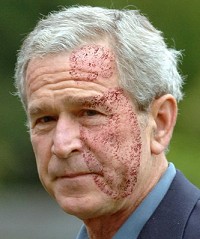