From Uncyclopedia, the content-free encyclopedia
Jump to navigation Jump to search
“The Bra can be very good for jowls.”

~ Richard M. Nixon on the bra, just before the Nipplegate scandal

~ Jimmy Beam on Baby Got Back 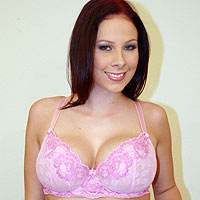 As you can see, the steel girder along the base supports the weight of the second and third floors of the building.

A brassiere (commonly referred to as a bra) is a mechanical device constructed of copper, steel and stretched leather. It is used as an undergarment that covers, supports, and elevates saggy body parts, most commonly, the breasts. They are traditionally worn over an undershirt of a contrasting color. Since the late 19th century, it has replaced the corset as the most widely accepted method for supporting saggy breasts.

The enemy of men everywhere, the brassiere is a piece of (really pointless) titwear. Its main purpose is to increase the duration of intercourse but can be totally by-passed by concentration on other areas of the female anatomy. It was and still is commonly used as a type of fuel by feminists. The brassiere is known to be pointless as women really didn't wear them in ancient Greece, especially in ancient Greece. Showing off naked tits was deemed immoral by the pope a long time ago, because he made money mostly off off selling women's clothing, and he really needed some extra cash. However, today, the brassiere is considered to simply be a formality, and also a kind of protection against That rapist currently looking at your sister's tits using a pair of binoculars. Ugliness works against that guy, too, but I personally don't find ugly people enjoyable, especially when they're in my field of view.

The bra, originally called "boulder holders", was invented in 1736 by John Bra. Before this time, women had to settle for a primitive, less comfortable supporting device invented by florist Timothy Titclamp.

Contrary to popular belief, the most commonly accepted hypothesis among bra scholars about the derivation of the word is not after John Bra, but from the shocked and hurt noise that men often made when the garment was popularized.

At the turn of the century, women began wearing their Bras under other clothing. This was later proven to do significant damage to the ribcage and decrease breast size. Men who wear bras, called Germans, will often experience chemical imbalances in their bodies causing them to turn into Rosie O'Donnell.

Upon the introduction of the bra, men were frustrated at the way it interferes with access to boobs and so invented various tools to get through to the juicy prizes beneath, examples include wine, massage oil and flowers. Women appeared to like such tools and so many obliged to remove their bras once subdued by one or a combination, however the clever females decided to step up the man-proofing and added a clasp. Recently males have discovered that the clasp can be overcome by the use of a pair of Monkey Wrenchs. (Wrench's? Wrenches? - whatever) you take one monkey wrench in one hand and apply it to the bra-strap on one side of the clasp, you take another monkey wrench (you may have to borrow this one from a friend, but don't forget to give it back when you are finished with it) in the other hand and grip the bra-strap on the other side of said clasp and then you lever them apart). If they the clasp fails to release, an alternative method is to apply the wrench to the back of the "womans" head, then try again fromt step one.

The over-the-shoulder boulder holder has been used in building foundations since the early 18th century. There is a steel base and several protruding beams which connect to the top (called the "cups") which have to two points in the middle, called "nipples." In cold weather, the metal may contract, creating the illusion of larger breasts. That is why women wear cleavage-bearing tops, and adore air conditioning.

The Bra was secondly used by the Egyptians during the Construction of the Sphinx. (No it wasn't.)

The word Bra literally means gets-in-the-way in Swedish. This caused the rumour of Sweden as being a very sexual liberated country, since swedish youth all through the hippie era kept speaking with their anglosaxian friends about the importance of bra vibrations without recognizing the error in translation.

A modified version of the Bra was used by David to defeat Goliath. An unpublished version has David mortally wounding Goliath with "stones of frustration".

It is also possible that the Bra can be used as a floation device with minor adjustments, these Bra are called water bras and seem to be definitely making their presence in water-based cultures such as Atlantis and Australia. 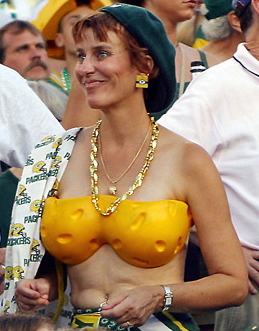 Many years ago, and even up until this day, bras are made from a variety of materials. None however more popular than the most recent: cheese. Yes, cheese has taken the world by storm, becoming one of the fastest selling materials for bras within the last billion years.

Unfortunately, the cows that they used to get the milk from are becoming too delicious, and many of them have resulted to cannibalism. This has been a real threat to the bra manufacturing industry, especially considering how high the demand is for catwalk models in Paris, New York and London. Fortunately, the future of cheese bras appears to stay strong. Over the next five years, manufacturers hope to make the transition from cow cheese to dolphin cheese in the hope that dolphins will be able to supply enough cheese, without the issues of cannibalism.

By the year 2065AD bra design is likely to have reached such an advanced level of development that nuclear fusion fuelled rocket boosters will be activated on request to transport the wearer 15 feet in to the air. Scientists envisage a world in which wearers have access to '3Stage Travel'.

A bra will usally start to be weared at ages of late 8's and above Bra often has associations with sexual frustrations, especially to males of aged 15–19, whos sexual desires to get hard on a female will often begin with the bra. Whilst 2 specimens are making out or touching, they will try and often untangle the bra to get a feel of the boobs, to further arouse the male, this is one of the barriers to humankind and must be terminated! Research shows that 999999% of males want females to be braless so females, get your bras out and burn them!

Look up Brassiere in Undictionary, the twisted dictionary