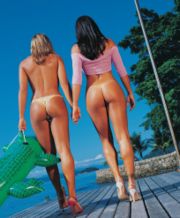 Thongs: a fashionable swimsuit with a retro look

A G-string (alternatively gee-string or gee string) is a type of thong underwear or swimsuit invented to cut the costs of bikinis and to maximize the profits of companies who manufacture them from simple patterns and scraps of cloth that would otherwise be used as rags. Typically, the thong bikini is a thin strip of cloth that passes beween the legs and buttocks attaching to a waistband that, in the front, ncludes a triangular piece that covers the pubic area. The buttocks are left fully exposed, which is what costs the swimsuit's production costs.

History (or Maybe This Section Should Be Called "Herstory"?)[edit]

In the fashion industry, the thong is a "retro" item, meaning that it recaptures the look of a clothing item that was popular in the past. The thong bikini was first popular approximately 75,000 years ago among south African tribal women, and it made a reappearance about 2,000 years ago among Japanese men as a loincloth. In modern times, the thong bikini made a resurgence among the women of Rio de Janeiro, Brazil, in the 1970's, which inspired the bossa nova song "The Girl From Impanema," which immortalized the swimsuit's wearer, Heloísa Eneida Menezes Paes Pinto (now Helô Pinheiro). Heterosexual women and homosexual men sometimes sing the song as "The Boy From Impanema," revising the lyrics as necessary to effect appropriate (or, depending upon one's beliefs, inappropriate) gender changes.

Thongs had the unintended effect of drawing attention to the buttocks, and many women who wear them have objected to the ununvited attention of men who ogle them as they stroll boardwalks, sunbathe on the beach, play volleyball, skate, or ride bicycles near the shore. However, other women, such as Britney Spears, Christina Aguilera, and Li'l Kim, whose careers depend upon their displays of the flesh (and, often same-sex kissing), the added exposure has proven good for their sagging careers. There has been talk of using computers to outfit actresses in old films such as Bikini Beach and Beach Blanket Bingo in thongs to give the movies an updated look and cash in on the current thong craze.

Where ordinary women are concerned, the public is less tolerant of buttocks displays, with the wearing of thong bikinis on beaches and elsewhere illegal in many states. Europe, which has a fetish for what many wags refer to as "Greek culture," tend to take a more tolerant view, so to speak, of the wearing of such swimwear, claiming, that, in the case of women's thong bikinis. "less is more."