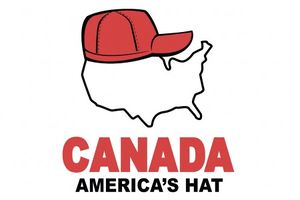 Any questions?
“Nonsense, I say America is Canada's trousers.”

National Hat Day is celebrated on the first day of July (July 1) every year in America. It dates back to the year 1620, when Americans first decided to do something about not having a holiday before the 4th of July. It was declared a national holiday in 1853 by President Millard Fillmore.

The holiday is celebrated on the same day as Canada Day in Canada. This is because Canada is, obviously, America's hat. That is why, so stop asking.

For a list of conspiracy theories as to why, see this.

Traditional Hat Day celebrations include parades all across the country in which participants wear nothing but hats to cover their privates up, though the hats are optional and rarely worn. The most common and festive celebration on Hat Day is the annual invasion of Canada as a mocking technique to America's beloved cap.

It is quite noticeable that Canada does not resemble a hat all that much, other than its place atop the northern United States. There have been talks about chiseling away at the Canadian landscape until it resembles an actual hat. In 1987 it was decided that the task of turning Canada into a hat was the most important global issue at the time, so an excavation and landscaping team was sent to alter the country's image. However, officials could not agree on what style of hat the country should resemble. When Americans were polled, the top spot was split between a top hat and a baseball cap, with a cowboy hat shape coming in third place. This dispute has not ended and is still being discussed by world leaders all across the universe.