Red Hat was the first Linux distribution to use the Recursively Pathetic Manager (RPM) as its software packaging format—famous for not being able to install anything because Package X refuses to install without Package Y being already present, but Package Y cannot be installed because Package Z is already present and conflicts. Red Hat's free equivalent, Fedora Core, now uses the Yes Uninstalled Me (YUM) dependency resolver, an enhanced version of RPM that uninstalls everything it doesn't see running or thinks is using too much memory and forces Package X and Package Y to shut up and install anyway.

Over time Red Hat Linux has spawned a number of hacks imitators clones other Linuxes, which share all the loveable idiosyncracies of the Red Hat pedigree, while adding completely new and original bugs, and an even spankier looking GUI—Mandrivel, Yellow Lab Linux, and PersonalComputerLinuxOperatingSystem, to name just a few. 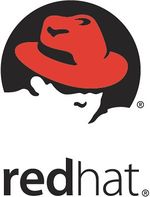 Red Hat Linux was created when Carmen Sandiego stole the source code for Linux, an operating system written by Kernel Linus Torvalds of the Penguin Army. Linus was planning to take over the world using his secret operating system, which was incompatible with spyware used by the FBI to track what every human being on the face of the planet is doing; however, after Red Hat published Linux, Linus was forced to cover his devious plans by releasing the original copies as "open source software" and claiming that it was created "to see if he could do it." 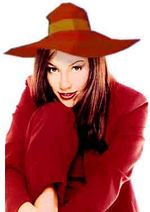 Carmen Sandiego crouched in her "about to steal your virginity" pose.

Carmen Sandiego acquired the source code to Linux by using a tactic called "social engineering", a Sith mind-trick used by expert hackers to convince others to do their dirty work for them; in other words, stupid people do stupid things and get in trouble while the hacker gets away with the loot. Carmen Sandiego used her "Steal Your Virginity" pose to lower Torvalds' guard just moments before proceeding to incapacitate him; this worked because all computer nerds are virgins until a girl wants something other than sex from them. Once Linus was exhausted, she was free to steal his computer, including the source code to Linux.

Red Hat was R.I.P. September 22 2003, and Fedora's ass has been out hustling the street ever since. However Red Hat is being secretly released as "Rude Het Lennux Shitereperise".