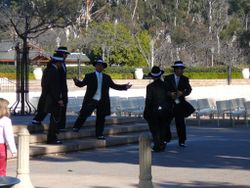 Zoot suits have been known to cause improvisational frolicking among wearers.

A zoot suit is a style of suit noted for its ability to fit no fewer than three full grown men. Originally designed as a practical joke, the zoot suit gained popularity in pre-WWII ghetto communities as a statement of wealth. Wearers would proudly boast the square yards, which often measured in the thousands, of fabric as a measure of how much they could afford to purchase.

The first zoot suit was constructed as a practical joke by a group of sweatshop seamstresses who got drunk and decided to make a suit that would fit the Statue of Liberty. Upon waking the next morning, they realized they had used up all the fabric available and promptly set about to destroy their creation. However, Vinne "Zoot Suit" Barbiano (who up until this time had always been confused about the nickname given to him by his mob boss) took a liking to the suit and attempted to wear it to dinner that evening. Although it took several minutes to get his new suit through the door, Barbiano's clothing was an instant hit. Given La Cosa Nostra's love of all things lavish, the style immediately took off in the Italian-American community.

As ghetto fashion tends to circulate through other ethnic groups before entering white culture, the Chicano/ Hispanic and African-American societies took equal interest in zoot suits. In the 1930's, zoot suits were the predominant fashion style, partly because they were visually dazzling, and partly because with four posts they could easily be transformed into a tent capable of housing a wedding reception. American Indians adopted zoot suits to look "civilized" yet they aren't Whites.

The name "zoot suit" is a combination of the Latin word "zoot," meaning "suit," and the American word "suit," which means "suit." Early fashionistas considered calling it a "suit suit," but felt that was a little redundant. Maybe it was from the Jewish community, since they speak English with a Yiddish accent, to pronounce "zoot suit" as it is. In the 1940's, every race, ethnic and religious group dressed this way, but it was Blacks, Latinos and Filipinos in Southern California whom loved it.

Celebrated with the Mariachi hit "Alberoto del Juego de Zoot," the zoot suit was the peak of its popularity when fullscale war erupted. Members of The Rollin' Cherry Poppin' Daddies Gang drove into the barrio and played a rival fight song entitled "Zoot Suit Riot." Because few were bilingual, most everyone assumed the rival song was a call to arms and not a celebration of good times. Rioting broke out, and thousands perished under the weight of their own clothes.

In the summer of '42 in Los Angeles, when U.S. soldiers, sailors and marines came to town, mostly white people from back east, whom began to encounter Mexicans for the first time in their sheltered lives and with war-time propaganda that promote xenophobia responses to foreigners (but we aren't at war with Mexico), the soldiers mistook them for Orientals or Injuns or how non-white ethnic these "Americans" were, they started bar fights or brawls all over L.A.

Because of the riots, the cloth-wearing community realized the impractical nature of wearing an entire cotton field's worth of apparel. Gradually the zoot suit fell out of style, and as a direct result, the price of fabric fell nearly 100% as supply was redistributed throughout the world. 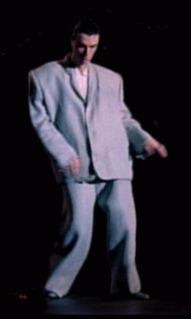 Sobriety from cocaine forced the general public to comprehend how ridiculous these things are.

After being out of the public consciousness for decades, a vain attempt to revitalize oversized clothing was attempted by white hipsters in the 1980's. Spearheaded by the post-punk band Talking Heads, a radical new design for the zoot suit was debuted. It remained in fashion for one cocaine-fueled night, the morning after which lead singer was said to have remarked, "I wanted a suit fit for a king, not a king-sized bed."

Although indescribably huge, zoot suits are meant to be worn by only one person at a time. A typical zoot suit starts as a single piece of fabric (usually velvet, seldom tweed) roughly the size of soccer pitch. A huge team of workers then fold the fabric into the shape of a normal suit and stitch it together in place. A typical zoot suit is worn with a fedora (normal sized) and a wallet chain (small). In certain regional celebrations a zoot suit can be worn with a zoot sombrero.

Zoot suits have, however, fallen into controversy in recent years as shortages of cotton have pushed clothiers to the brink of bankruptcy, and caused many Americans (especially strippers and prostitutes) to forgo the luxury of clothes. Many see zoot suits as an unnecessary strain on the industry, as studies have shown that the material going into each zoot suit is enough to clothe the entire population of a Midwestern village, specifically Chicago.