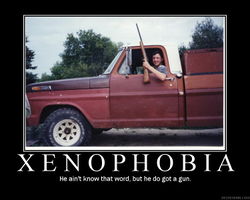 “Frankly, some of his ideas scare the shit out of me.”

“What is this 'tolerance' you speak of?”

“Xenophobia? Why would I fear Xenon, it's a lovely element, almost as good as Rubidium.”

“Anyone who doesn't fear Xena should be tossed into a volcano.”

The homo sapiens has 3.5 million years of (r)evolution, and with those years of perfecting the humanic stance, the bacteria Xenophobia (scientific name cumulative racisma) evolved with the apes. Though this bacteria does not consistently infect the same group of people, the most deficient results announce it's proficiently infected upon the confident leaders. Examples of such leaders would be Adolf Hitler...etc.

Xenophobia needs much forbite acid to grow, which means it needs black beings, yellow beings, pink beings, red beings(of humanic sources)to grow. To grow your own xenophobia, simple steps are to be followed:

Xenophobia tends to make Homo Sapiens call each other some names which is a side effect that cannot be granted to cause you a wonderful-life-syndrome(which btw, can be sold in bottles).

For those without comedic tastes, the so-called experts at Wikipedia have an article about Xenophobia.

Dr. Hwang states "I haven't lied, I just haven't invented photo-copiers yet". Just like that statement reseachers of Hikna Incorporation of Tripodic License Ethnic Recooperation(H.I.T.L.E.R.) have reinforced their xenophorbic statement: "We haven't found the real cures, but we're getting there". Until then we can't vaccinate some 13 political leaders who still argue about putting Starbucks in Iraq.

A drive down to Mexico should help do the trick. Nevermind, we have little Mexicos across the country to savor the best of Mexican culture. Oh wait, it would back fire and make the xenophobe fall into a comatose shock.