From Uncyclopedia, the content-free encyclopedia
Jump to navigation Jump to search
“Caveman not like UGG boots. UGG boot makers not pay royalties to UGG trademark. Caveman GOING TO SUE YOU!”

Ugg boots (sometimes called uggs) are a brand of Australian sheepskin boots that are common around the world. The name is taken from that time when a Fred Phelps clone (who hated every type of footwear except Fuck Taylors) cried, "God hates those ugly fag Jew boots!!! You shall burn forever in Hell!!!". Valley girls (the usual buyers of Ugg boots), being bad at the English language, shortened the phrase into "Ugg". In North America (particularly the United States), another notorious language-challenged country, Uggs have come a long way, meaning that so many girls actually buy these boots. These boots have grown into one of the biggest fashion statements ever. Yes. Ever. Strangely enough, Uggs are made for guys, too. 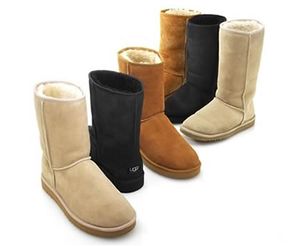 Uggs, Uggs, and even more UGGS! They come in many different colors, sizes and styles. 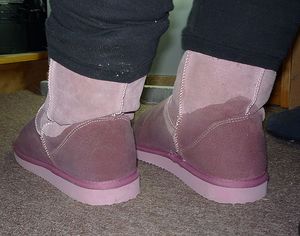 A typical pair of "Fake Uggs" with no "Ugg Tag" on the back of the heel. 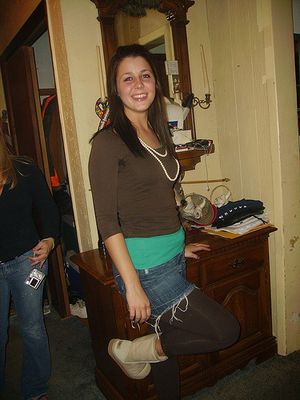 A teenage girl sporting her sleek Ugg boots and miniskirt. 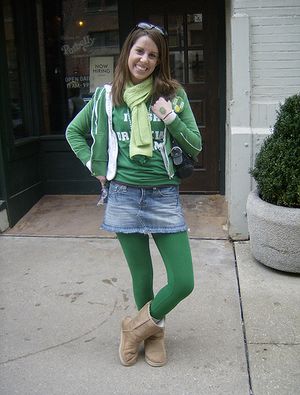 Yet another girl sporting her Uggs and miniskirt. 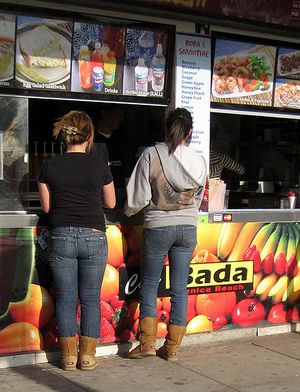 Well, like many shoe brands, Uggs come in many styles. The most important question a young girl might ask her mom might be, "Can I get those sexy Chestnut Ugg Boots that everyone has?" The mom may respond with 2 answers. One may be, "Well Kaitlyn, I think for a beautiful daughter like you, deserve those!" A second response: "Uhh, Kaitlyn, I will not let my daughter wear such putrid boots, EVER! GO TO YOUR ROOM, MISSY!" Alright, so many teenage girls and their parents don't agree on everything, but I'd say that a majority of them agree on most terms. A girl who may not "fit in" with the crowd sees that the popular Jessica (nicknamed, The Glamour Girl) will get away with everything, just because she keeps up with the latest fashion trend. Pewter Ugg boots, Hollister jeans, an Abercrombie tank top and (can't be complete without) a Gucci purse. So, the example before was "Kaitlyn". Ok. Honestly, Kaitlyn, along with many other teenage girls, doesn't fit in with the crowd too much. To fit in and possibly become instantly popular, Kaitlyn begs her mom to buy her a pair of Chestnut style Uggs. The next day at school, Kaitlyn and her friends are all wearing the same boots. What are the odds? Then, Jessica comes over to Kaitlyn and says to her, "Kait, welcome to the world of popularity."

Now seriously, folks. In the world we live in, does it actually work that way? Yes and no. Ugg boots may be worn by many girls,but the previous scenario shouldn't happen in the summer. A boat load of guys and girls despise the mere image of a schoolgirl who loves to wear her Uggs in the summer, when it is 93 degrees out. Are you kidding me? And we thought that girls hate to get sweaty.

What kind should I wear?[edit]

Just pick and choose, the possibilities seem endless. The one thing you would hate to see is a girl who drags her boyfriend into an Uggs Outlet Store where they stay there for hours and she asks him what he thinks of, "This one?" or "This one?" or no, how about "This cute thang?" Uggs come in pink, blue, black, red, brown, tan, polka dot, smiley face, and (sadly) puke-colored.

Fuck Taylor-wearing low self esteemers make fun of girls who wear them, due to the name UGG. I don't know what the dude who created these boots was thinking, but was he for real when he decided to call them Ugg boots? Was there a catch? "I'll just call 'em Uggs, so the American folk can make prejudice remarks and stereotype people". We are aware that many foreign products are usually shipped over seas and marketed in America (our cars and clothing, bitches!). Some might say that it can be a burden sometimes, where are we going to put all this crap? Uggs are found on over 4 billion feet around the world. That's a lot of feet right there.

The typical teenage girl loves shopping. Where are they going to shop, today? Hollister? American Eagle? Pacsun? Maybe, Banana Republic. No. Limited Too? NOO! The Ugg Store. Wait a minute, an Ugg Store? They have that now? Shockingly(?), Ugg stores are not too common in regular shopping malls. They can be found in most upscale outlet retail centers. They are located within fancy-shmancy retail chains, like Brooks Brothers, Liz Claiborne, and Theory, just to name a few. 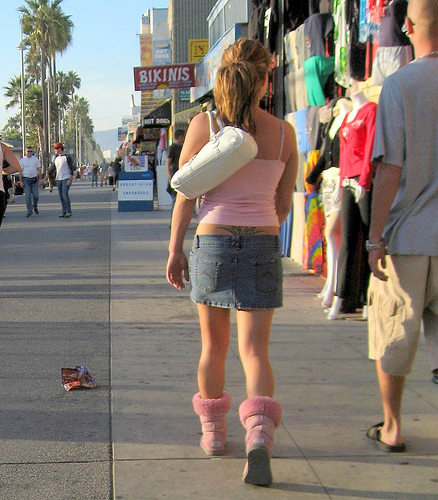 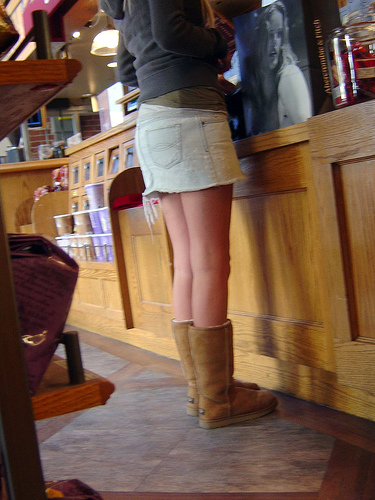 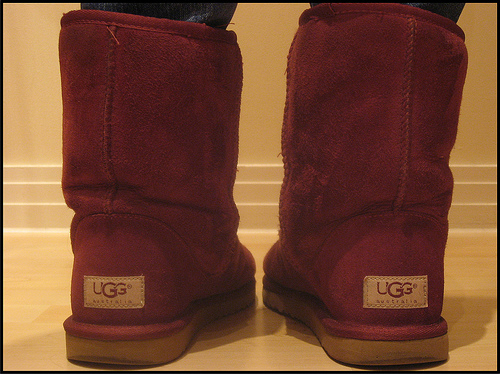 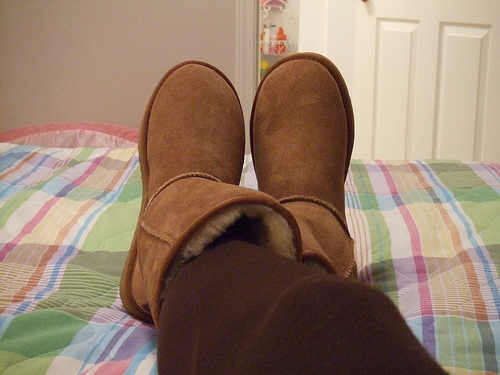 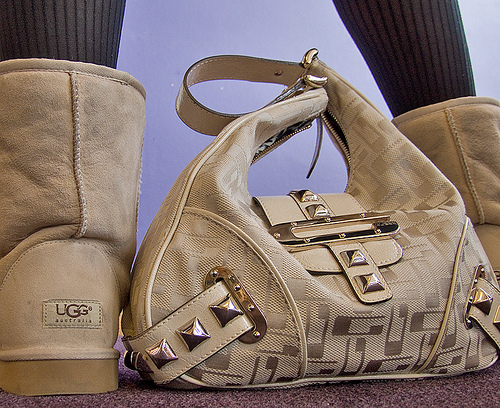 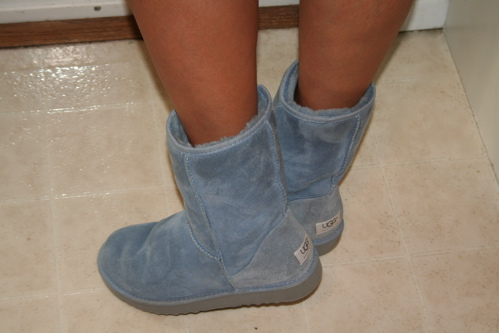 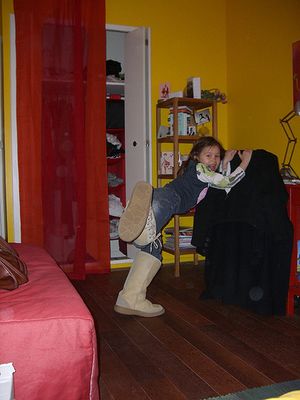 Even the 7 year olds are picking up on the fashion trend.

Uggs are not cheap boots. They are actually very expensive. Some go up to $150. Girls with a lot of dough...oh wait..let me change that around....Girls who come from rather wealthy families usually can afford such boots. The exception, of the typical "schoolgirl", or "slut", who doesn't work at all will somehow end up purchasing Uggs for half price. Typical white, preppy girls wear Uggs along with their favorite "Hollister Miniskirt", or the Uggs tucked into their jeans or sweatpants. Most girls who wear Uggs are either very hot, semi-hot (meaning that they are cute, not super hot or drop dead gorgeous), or rather plump and not that attractive. 95% of girls who own at least one pair of Ugg Boots are very sexy. Blondes, brunettes, and redheads are included here. You can find the Asian girls wear these boots, along with the Gothic and Emo crowd, some Indian chicks, Black chicks, and little kids. 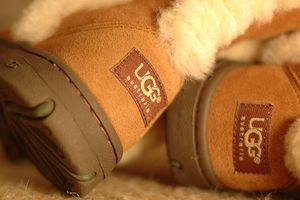 Look closely, are you ready to blow away 150 bucks on these boots? 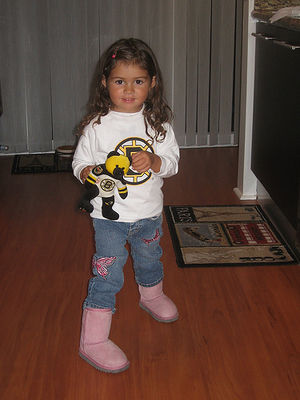 A young girl wearing pink uggs, who might become a model someday. 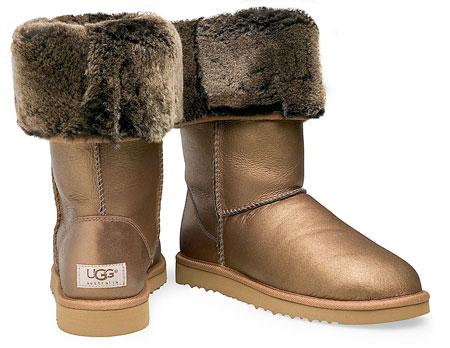 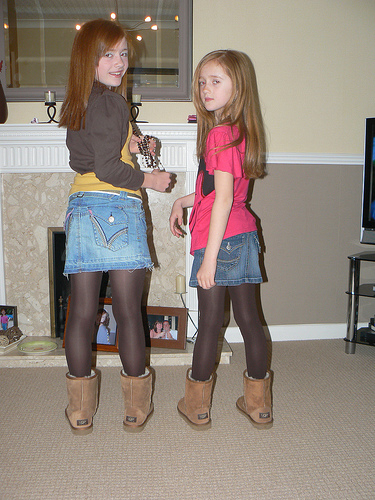 Who knows how long this trend will last. The day Hushpuppies went out of style will always be a funny memory. Those types of shoes would be described as the "lesser Ugg", meaning that girls didn't go crazy over a pair, like they do with Uggs today. Omg, Uggs sold for only 139 dollars! Yeah, we tend to misjudge people all the time. We should be less demanding, critical and ignorant. Some people say, "Who cares? It's just a dumb phase. Let these girls be." Some other people might say, "If the youth wants to humiliate and degrade themselves to a full extent, let them! It's their life." Now then, it's under nobody's control to cease this fashion trend, but we should all realize that (according to a quote made famous by a poet) deep down you shouldn't like someone for the shoes they have, but for the individual them self. Yes folks. Who cares if the popular girl in the school owns 8,932,104,444,049 pairs of Uggs? Nice prophets would consider to look at someone on the inside, rather than the outside. That means we should disregard the person's looks, no matter how good or bad their taste of fashion is. 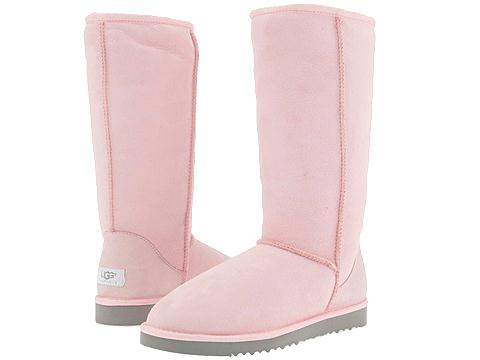 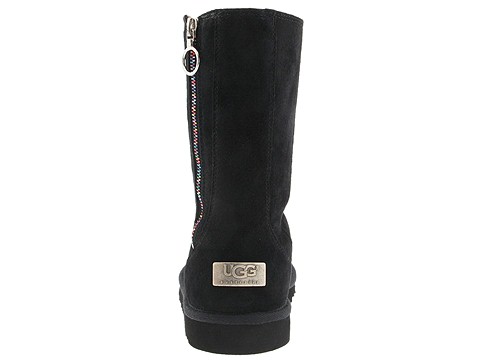 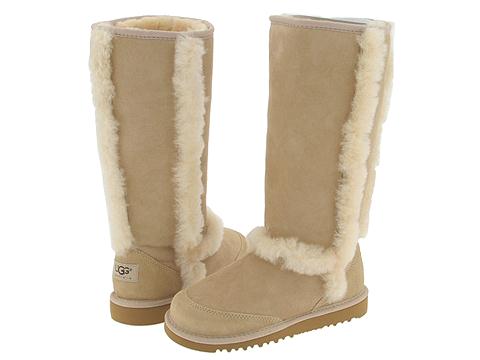 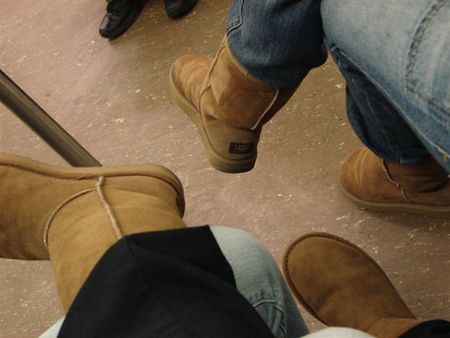 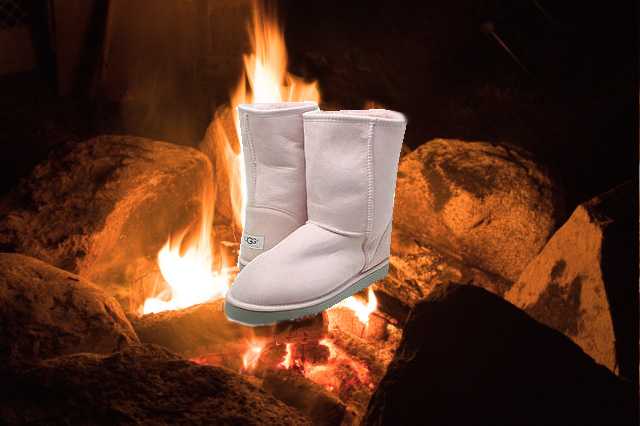